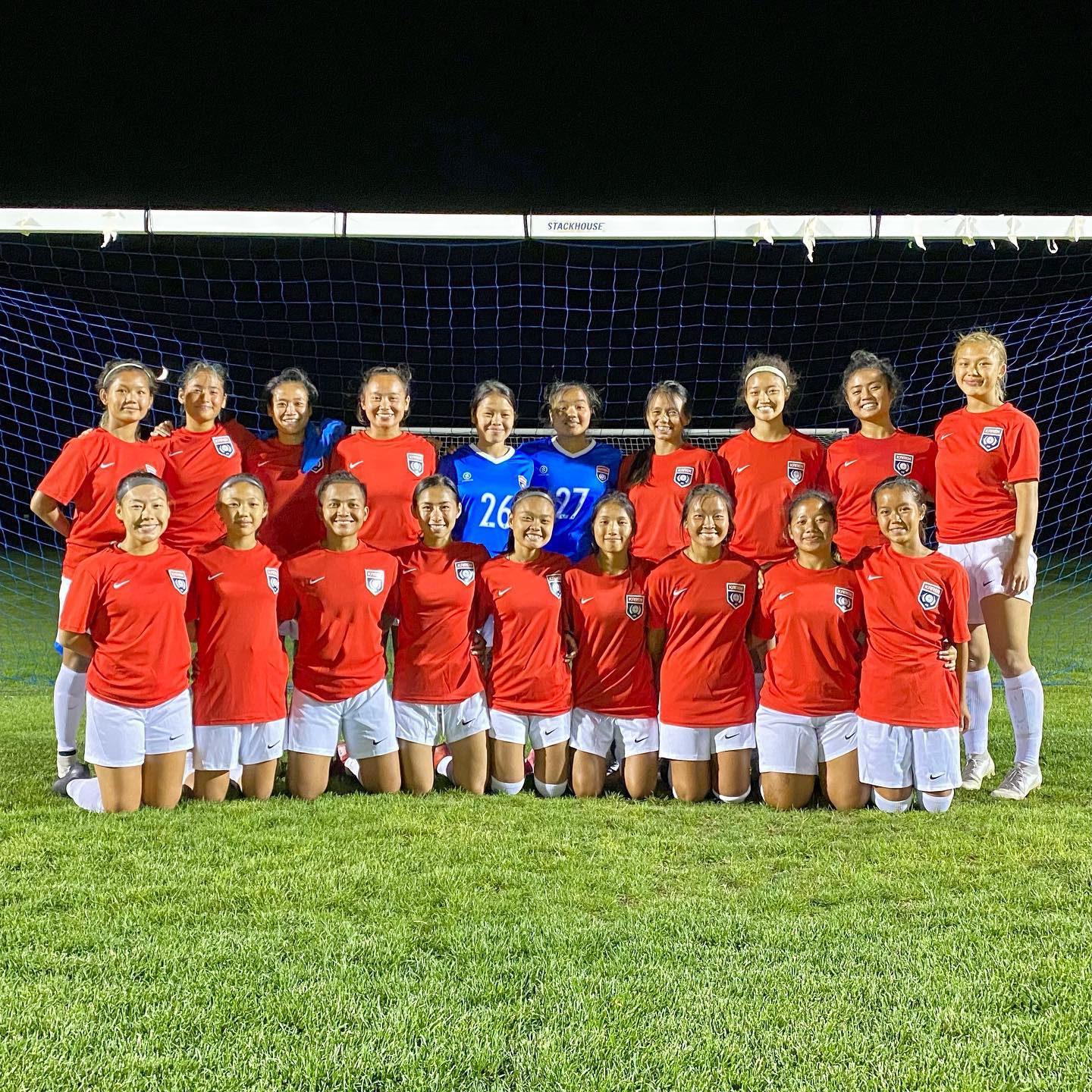 I first interviewed Karen Football Association (KFA)  executive director Kyle Johnson in early 2020 for an article published on March 5th of that year. At the time, we discussed the Karen Football Association as an already formed entity, but a young one, still forming its identity and plans. We discussed national team camps, tournaments, and more. Then everything shut down.

The KFA, amongst many other things, is a national team. They, as members Confederation of Independent Football Associations (CONIFA), seek to represent a people who are not recognized by FIFA. Much like FIFA, CONIFA hosts a World Football Cup, but also several regional or continental tournaments. Other well known CONIFA members include Tibet, Northern Cyprus, and the Chagos Islands.

The KFA, which is based in the Twin Cities, hopes to provide that space for the Karen people, who have historically populated areas of what is now Myanmar, and to this day have been the target of political violence via forces within and outside of the country. The Karen Organization of Minnesota estimates that more than 17,000 Karen live in the state of Minnesota, with a majority living in the Twin Cities metro area.

The KFA’s boys and girls futsal teams function as the organization’s youth side, utilizing the educational benefits of futsal. In 2020, the KFA’s boys futsal team took second in the US Futsal National Tournament, which the girls also took part in. A men’s soccer camp, which followed a women’s camp held in California in 2019, was also held in early 2020. The KFA men would lose 2-1 to NPSL side the Georgia Revolution in a historic friendly.

In 2021, the boys did not qualify for the US Futsal National Tournament, but the girls once again represented the KFA at the tournament. Neither side would qualify for 2022’s nationals, but for Johnson, the ups and downs of qualification for the youth was a positive learning experience.

“When we talk about lessons learned, one of the things I’ve come to recognize over the last couple of years, it’s become more and more apparent,” Johnson explained. “The athletes in the community are incredible athletes, hugely talented, highly skilled, but from a futsal stand point, with the youth, there’s so much more to the game than people actually know.”

Johnson went on to explain that even when the boys made the 2020 tournament final, it was clear there was work that had to be done to improve the quality within the teams. To address this, the KFA brought in Coach Eduardo Christ.

“I was very intentional on bringing somebody in with a lot of futsal knowledge, someone who’s been in the community for a while and somebody who, in my opinion, is one of the godfather’s of futsal in Minnesota,” Johnson continued. “[Coach Christ] is one of the originals who’s been doing it for ten, fifteen years, maybe longer… For me it was as rewarding to see these teams go through this tournament, now with a sort of futsal mindset. The things they did from a tactical standpoint, and the amount of growth these kids had during a short time period… Those are the wins for me. Anything that we do, that growth in these kids, those are the real wins for me.”

The wheels would get to turning for the adult teams in mid-2021, as the KFA’s men’s side would play popular NPSL club Minneapolis City in a more widely discussed friendly, with Karen player Eh Ku Say then joining Minneapolis City for their friendly against USL League One’s Forward Madison. Eh Ku Say was also a product of the Minneapolis City Futures program, a revolutionary youth soccer program in the Twin Cities.

“Over the last two years, we’ve had this incredible relationship with Minneapolis City and they started their futures program,” Johnson continued. “The first year of the futures [program], we had two of our athletes be a part of that program. I remember talking to one of them pretty extensively about it. He was saying to me, how much he had learned over the course of the year he was in the futures program because they do things very professionally over there. They’re trained, they’re professional, their expectations are very professional. Those are things [our athletes] haven’t been exposed to before.”

The KFA’s friendly against Minneapolis City, who have won a consecutive three NPSL North conference titles across 2018 to 2021, would end in a somewhat one sided scoreline, as the Crows put six past the Karen. However, Johnson is quick to point out good things can come from such results.

“You know it was very interesting, it was probably the best outcome that could have happened to KFA… I’m really big on losing. Again, people may think that I’m crazy, but I’m so big on it because of the lessons that can be learned by losing… I thought we were going to be more competitive than we ended up being on that day, unfortunately we were not, but again that’s okay because it’s a chance for reflection.”

While he admits his thought process isn’t perfectly conventional, Johnson says he hopes that his perspective resonates with the players, who he notes performed far better weeks later in another friendly.

“We came back and we had a friendly with the University of St. Thomas’ club team like a week or two later… We ended up losing 1-0, but the play of that game was nothing compared to the city game. The growth of the players from that city game to the St. Thomas game was immense, and it was more like the team I knew we could be… again, those are the wins for me from a developmental standpoint.”

“We wanted to get this group together, get them playing for a week or so and then get them some matches. We were really pleased with how those matches worked out. We were on the winning side for both matches which is great, but for me, again, it was more about the development side.”

Johnson also cites the continued work that he and the KFA are putting toward combating societal norms surrounding female athletes in and around the organization’s activities.

“When we talk about gender equity, we take a bit of a different approach to it and focus on the men too… If we’re really going to make these strides in gender equity for the future, those long term strides, it’s going to be the men that are going to have to take that on in terms of their behavior, their actions, and what they say… I’ve noticed a shift in a number of young men.”

Now, it’s a new year, and the Karen Football Association faces the responsibility of taking the next step in their project.

One opportunity that has gone somewhat under the radar regarding the KFA has been the presence of female players taking part in clinics with Saint Paul Parks and Recreation. This trend began in 2021 and is set to continue in 2022.

“[Saint Paul Parks & Rec] want us to come back and provide some more coaching clinics, so we’ve added some clinics to their dockit, working in some elementary and middle schools. My understanding is these programs are really going to be focused on girls… I’ve had conversations with [the players]… they’re 18, 19, 20 years old. I don’t know if they realize right now the impact that they’re having on these younger girls.”

Johnson describes the KFA’s current plans for men’s and women’s matches as fluid. There had been a plan to take part in the World Unity Football Alliance’s Women’s World Unity Cup in England. The cup has since been canceled, but hope is still there to put on a series of friendly matches. The other organization the KFA is in, however, also has plans.

“[CONIFA] are planning their CONIFA Women’s World Football Cup, which falls on exactly the same time we had planned on going to the UK… There’s a lot of things we need to figure out before we make a full commitment to one or the other… If we are able to do either of these experiences, they’re going to be the first ever Karen national team playing in an international tournament. This is the first time in history that something like this will happen.”

Either opportunity would see the KFA play international opposition for the first time, with the CONIFA Women’s World Football Cup in India, set to be hosted by the Tibetan ​​National Football Association, holding an especially high potential for exposure. The Tibetan connection is a close one for Johnson, who’s first interest in starting the KFA was born out of a video call he helped arrange between the girls he coached at Como Park High School and the Tibetan women’s side at the time.

“It would be really such a cool thing, because there are women I coached at Como that would be on that national team roster, going to India. It would be absolutely incredible if there are a few women from that video call still on the Tibetan team, which I bet you there are… For them to meet in person, in this women’s world cup, would just be, wow… Small world.”

The KFA is also still pursuing domestic friendlies for its mens and womens sides, looking to continue relationships with the high level amateur, semi-pro, and collegiate sides around the state and country.

“There’s tons of opportunities like that… I’m going to be putting out some feelers to local men’s teams, whether that be collegiate teams or semi-pro teams here, to look to put some friendlies on the schedule in [those teams’] preseason… Ultimately that’s the biggest thing for us right now, we just really need to be able to play more competitive matches.”

The key obstacle ahead of all these goals is, of course, the financial infrastructure required to keep operations running, especially as plans of international matches form.

“The financial component of things is probably the most challenging of all. Getting a team to India for the CONIFA World Football Cup or even to England… I mean even California, there’s large expenses involved with that.”

In the end, Johnson centers the work the staff and players put into the KFA around the social and cultural significance the organization has for many Karen in the United States. The topic of the recent violence in Myanmar, where a decades long conflict has burst into the headlines, is an unavoidable factor.

“You know, the goal is to play the game but I think the bigger goal at hand is the opportunity for these athletes to be able to share their stories, personal stories but also community stories, with people around the world… It’s important for these athletes to share their stories and bring more awareness to what’s happening [in Myanmar], what’s happening to their people.”

In the end, there’s a common thread through everything that the Karen Football Association does, a thread combining the pursuit of improvement in the community and a pride for the countless challenges both the new generations of Karen and their ancestors have faced.

“Every time they put the jersey on, they’re reminded of what they’re playing for and our motto is ‘I play for you’… When you look on the back of our jerseys it has listed from these athletes, what they play for. It’s a list of twenty to thirty things that they’re playing for… We included in that list the names of all the refugee camps that they came from, the names of villages that they came from.”

While there are still plans to be confirmed, there is no doubt that the Karen Football Association will be back at it in 2022, continuing the fight for the representation that the Karen, and many other communities around the world, deserve but so greatly lack.