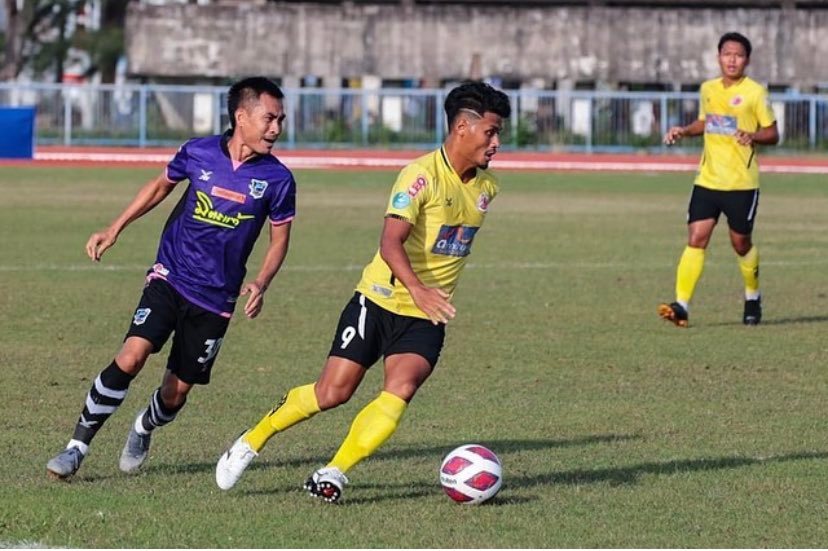 In an ever expanding world, within and outside of the beautiful game, the pathways one must take to become a professional soccer player often seem outdated in their narrowness.

Look beyond the headlines, however, and it is not so hard to find tales of athletes who have taken it upon themselves to pave pathways outside of the norm. Saint Paul’s own Kapaw Htoo is one such story.

Tay Vang helped Htoo get introduced to soccer through Saint Paul United, the program he credits with introducing him to the foundations of the game.

“I joined [Saint Paul United] with [the Vangs],” Htoo explains. “With everything to me, looking back, their father had a big, big role in my career here. [Tay Vang] taught me the basics and got me to train my skills. I pretty much learned everything in soccer from their father.”

While Htoo would not be a part of an academy as he entered his teenage years, something he says he regrets, he was a dedicated high school player. Htoo does admit, however, that he made errors while attending Osseo Senior High School.

“In high school I made some big mistakes, I got some bad grades in school, I didn’t set myself up to go to a D1 school and so I didn’t play D1 like other kids. With my ability I believe I could [play D1]… I didn’t really have anybody to guide me and it sometimes felt like I was out there by myself.”

Htoo would attend and play for Dakota County Technical College before eventually joining the D2 University of Wisconsin Parkside in the southeastern town of Somers, WI. He would manage 27 appearances across two seasons according to school records. Parkside finished second and first in the Great Lakes Intercollegiate Athletic Conference (GLIAC) regular season in Htoo’s two years with the team. They also won the 2019 GLIAC tournament.

While taking on the challenges of collegiate soccer, Htoo also played for several high level amateur clubs in Minnesota. He played for VSLT and the Minnesota TwinStars from 2017 to 2019, and was set to play for Vlora in 2020 after spending time with the side in 2019 before the COVID-19 brought the UPSL season to a halt. He also frequently played with prominent Karen-Minnesotan amateur club Evolution FC for several years.

In his final year in the NPSL, playing for the TwinStars, Htoo finished in the top ten goal scorers for the NPSL North’s regular season with four and was also named in a Top Drawer Soccer Team of the Week for a prime showing against La Crosse Aris. The article incorrectly states he scored two goals, but in reality, game footage shows he scored a hat trick. He had 4 starts and 5 total appearances that season, helping the club finish fourth.

Htoo says that he learned quite a bit from his years at Parkside and the NPSL, despite admitting he had hopes of playing for higher level sides.

“The biggest strength I gained from those years was my game IQ, [before] tactically I wasn’t there,” Htoo continues. “As a smaller guy I needed to use my brain against these big guys, because in the US it isn’t like in Thailand… [I learned] I had to be disciplined, if I want to improve I have to dedicate myself to playing and training. I learned that if you want to be a pro you have to act like a pro.”

Upon graduating from college, it quickly became clear to Htoo that the path forward would be a muddy one. Having played at a D2 school, he struggled to get attention from professional clubs.

“I played there for another two years. After that, I was pretty much nowhere, I didn’t even really know what to do after that… A lot of kids out there, really talented kids, after college it’s like, then what, even if you played division one. Now they’re stuck… How do I go to a try out, a combine? At my age it’s pretty tough. When you’re 23, 24, if you haven’t already gotten your first contract you’re pretty much done.”

Htoo eventually decided the best move might be abroad, but still struggled to find a place that would fit him on and off the pitch. The tides began to shift once he acquired an agent.

“I had to go there and find the right place and environment for me,” Htoo explains. “At first I looked at Europe, but I wanted to live somewhere that felt right for me. So I had a friend, who actually had a friend who played in Thailand and eventually I got a call and he hooked me up with [AN Sports Agency]… I came to Thailand and looked around for different tryouts, looking through teams for which will fit me the best.”

After a dose of patience, that fit would eventually present itself in the form of Chanthaburi FC of the Thai third division, Thai League 3. The club, named after its home province and city, is of a humble background, spending most of the 21st century climbing up and down the lower levels of the professional game in Thailand. The club shares Chanthaburi with others, including fellow League 3 side Kohkwang Football Club.

Thai League 3 is divided into six regional tables, with Chanthaburi in the East division. With some variation overtime as adjustments are made to the format, two to four clubs move up to the second division every year, with three moving up for the current Thai League 2 season. The bottom club in each League 3 division is also relegated. As of the writing of this article, Chanthaburi are eighth out of twelve in the East, with 16 points from 20 games.

For Htoo, the exposure to Chanthaburi and Thai football has been an impactful one even at the lower levels. As is often the case, many hidden gems play throughout the league, including Thai youth national team players and players on loan from larger first and second division clubs.

“There’s a lot of great players here and I know I have a lot to improve, so I think I made a really great decision to play in the third division here,” the Chanthaburi midfielder continues. “I went to a lot of trials and some clubs rejected me, I did get some offers as time passed, but I was still looking for the right club. Then I finally felt like I found the team that fit me the best with playing time and getting along with the players.”

The bar at his new home is indeed a high one, lifted higher by various conditions. Htoo is not considered a domestic player at Chanthaburi. As he explained to Sota Soccer, while he was born in Thailand, he has long since changed to an American passport. This means that he classifies as a foreign player, a difficult label in a league that has a strict limit of three foreign players.

With his name and number, 9, printed in black across the back of the yellow Chanthaburi home kit, the former Osseo Oriole says his current successes are simply the result of the risks he was willing to take when it mattered most.

“I had to make a tough decision, what if I don’t make it and run out of the money that I saved up, but I had to say why not give it a try. If I make it or not, I can say I gave it a try.”

Signing for the club in August, 2021, Htoo would earn his first big spotlight upon arriving at Chanthaburi on October 10th after scoring his first goal for the club and being named man of the match in a 2-0 league win against Royal Thai Fleet.

Another highlight would come on November 27th, when he scored a 67th minute equalizer against current east division leaders Pattaya Dolphins United, heading in a free kick to make it 1-1. He would later share the goal in an Instagram post.

Kapaw Htoo, it should be noted, is already connected with a national team. Htoo is Karen and has taken part in camps and matches for the Karen Football Association based in the Twin Cities. While his current obligations put some distance between him and the FA, he maintains interest in staying involved with the team, which plays independently of FIFA through organizations like the World Football Unity Alliance (WUFA) and the Confederation of Independent Football Associations (CONIFA).

“Definitely, if [the Karen Football Association] can keep targeting big goals and compete in tournaments I will be back.”

The final but clear question hovering over Sota Soccer’s interview with Kapaw Htoo was a simple one. Do you think this is a pathway too few players consider? For Htoo, the answer was clear.

“Definitely. A lot of the time, I find that a lot of players in the US are just stuck within their area. They’re in a box, and I want them to get out of the box,” Htoo continues. “There are some players that do go to Europe and spend time there, or in Central America, I’ve seen players go out there. But it’s tough… I think they need to consider what is the best place for them to develop and go up to the next level… If they’re happy they’re happy. I believe that by coming to Thailand I made the best decision because I believe I can improve and go to the next level.”

There are potential lessons to be learned about adventures abroad from Minnesota’s Mukwelle Akale.

Having played for Villareals’ youth teams, along with various youth categories of the USMNT, in the mid 2010’s, the winger made a promising move to the club’s third tier second team in 2018. Records show he had 38 appearances and four goals from 2018 to 2020. The winger then made a move to Cyprus’ Pafos FC, a small club in a lesser known but significant league.

Akale would make just seven appearances for 194 minutes across about a six month period. He’s since departed, taking part in training with Minnesota United last year but remaining out of the competitive game.

Another example of local Minnesotan talent going abroad to pursue opportunities is Alaysia Lane, who signed for Portugal’s Valadares Gaia. The former Rutgers and Gonzaga athlete joined the club at the start of 2022.

Valadares Gaia are currently 3rd in the eight team relegation group of the first tier, meaning that while they are able to be relegated, they are far from the bottom spot that would put them in jeopardy.

Htoo isn’t too concerned about long term goals, instead choosing to focus on the task at hand. In this case, that’s doing the best he can for Chanthaburi and earning more attention and respect in Thai football.

“For me, let’s see what I can do here. I focus on what’s going on right now, that’s what’s most important. Anything can happen, so I’m just focusing on playing here now. It’s good to dream big, but I also have to be careful.”

The 2021-22 Thai League 3 season concluded for Htoo as February ended. Following his final match of the season with the club, Htoo left this message on Instagram, with an optimistic offseason ahead of him.

“This is the last game of the season for me. I thank god for these two amazing coaches, De and manager Sachai, by giving me this opportunity to start my first football career here at Chanthaburi. Now let’s see what the future holds next for my journey.”

There is a professional athlete, raised and molded on the pitches of Minnesota, who is chasing his dreams and playing ball. If that’s not a story worth caring about, what is?