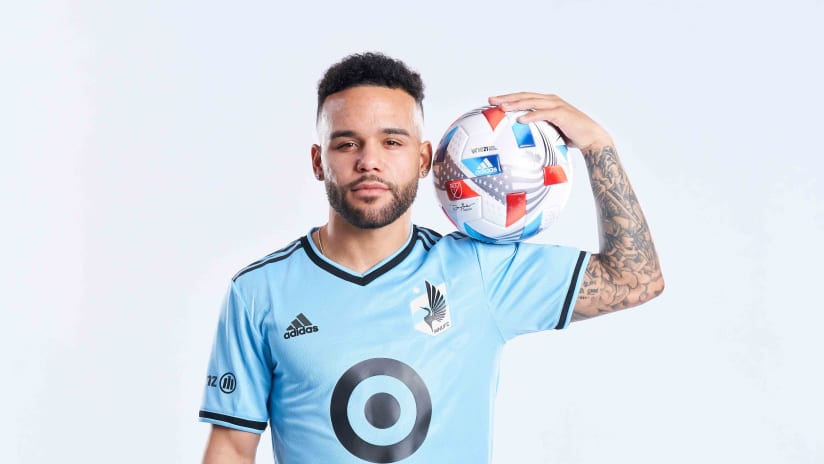 When the Covid-19 pandemic broke out in March of 2020, the world went into shock. That shock became an instant reality where everyone’s lives changed.

Lives were lost. Nearly six million to be exact.

People felt lost… it was a distant void where time itself didn’t feel to exist. We were living in what felt like a never-ending crisis.

The birds chirping became quieter. Grocery store aisles were empty, along with the shelves. The highways did not have cars swerving in and out of lanes and the narrow streets of the Twin Cities, here in Minnesota, were barren. The casual honk of an impatient driver, the busker on the corner or even the sound of the usual dog barking. It felt… empty.

Minnesota United’s DJ Taylor had moved to Minnesota in February of 2020 after signing with the Loons, only to be followed by the world shutting down a month later. A new club, new friends, a new city and a quiet, quiet world.

“There was a lot of stuff during COVID that people have to deal with, especially myself. You know, once the game is taken away from you, like how do you figure out what I am outside of just being an athlete?” Taylor said. “My own experience is just going through mental health, you know, being depressed or like having anxiety before a game and how I deal with that. I want to use this platform to help people who go through the same thing and let them know, like, they’re not alone.”

“ I do think it’s important to raise awareness for it.”

“You know, we couldn’t play for three months. So I was like: “What am I going to do with this extra time outside of soccer that I usually wouldn’t have time for?””

Taylor sat there, brainstorming on how he can tackle the world beyond the pitch. For him, the thought process of so many people believing that “athletes are just athletes” motivated to try and prove them otherwise.

“I think my main inspiration comes from the fact that people usually say we’re just athletes. I think that’s driven me since the beginning. For me, I want to show you that we’re not just athletes.”

Taylor’s thought process was to look beyond the game, for his own future but also on how he can leave his mark on the community and the surrounding world beyond it.

“I do think there’s a lot of problems, usually with athletes who try to transition after their career. So it’s like, what can I do now WHILE I’m playing to make sure that when I do transition, it’s not, you know, I don’t have a job. I don’t have a degree. I don’t know what to do with my life.”

Taylor wanted to create his own personal insurance policy for when he makes the leap beyond the pitch. He wanted to ensure that once he steps away from the game, he doesn’t feel lost in a world not surrounded by soccer.

The constant thinking and brainstorming eventually developed into a business idea. The business idea was then given a name and suddenly… it all seemed to come together.

“I’ve always told my friends that I thought it’d be cool to have a clothing brand one day so I used that time to just research clothing and drop shipping and like I just dove into it head-first and found this entrepreneurship knack that I have.”

Taylor founded Venci clothing line in 2020: A streetwear line for the people by the people. His aim? To make dreams a reality, and not his own.

Clothing wasn’t his first thought though. Taylor was focused on other things going on in the world, like the rest of us.

His immediate thought, though, was that so many people were sitting at home, locked in their living space alone. He knew that through his personal mental health experiences, that this was a massive issue for so many during that time-span. Knowing that, and realizing it, became his calling.

Venci (ven-see): to overcome or conquer.

“It’s a streetwear brand that I created that is all about self-growth and self-improvement. Basically, we try to inspire and motivate people to turn their dreams into reality. Which, for so many, is on how you use your platform. You know, for me that’s soccer but also Venci. It’s through the clothes too, though, the clothes can help make a difference in the world.”

Taylor’s entrepreneurship knack came out of nowhere for him; at first it was a fever dream… then it became a reality. It wasn’t the route he expected to go, but he has no plans on looking back. He’s embraced the concept of living two worlds: one on the pitch, and one off the pitch.

“It’s honestly two mindsets, whether I like it or not. You know, as an athlete I’m all about you know, just do this goal… work hard and I’m going to achieve it. But for business, for business it is a completely different story., you’re just chipping at a small or I guess a big picture day by day. And it took me a while to learn that… I was getting really frustrated, you know, wanting to see results in one month, two months, but the reality is you get to see results in a year or two years. So I’ve kind of had to adapt with that. But it’s been cool, you know, learning how to adapt to that side of my life outside of soccer.”

Taylor has continued to ask himself three questions over and over on how to grow as a company, but also as a new business owner.

“The aim for me is just to make a difference in the world. Of course you have to make money – it’s a business, but for me right now I just want to continue Venci and keep it growing.”

Taylor mentioned there are plans to eventually get clothing onto a store shelf, with him teasing a possible opportunity with a pop-up shop at the Mall of America in Bloomington later this year. In  addition to the pop-up shop, with March being Women’s History Month, there are plans to release a shirt that will send a portion of the proceeds towards women entrepreneurs and women-owned businesses.

“For me, again, it’s about changing the world, man.”

Taylor’s journey has been an expressive representation of who he believes he is and who he can be. He believes that, even at just 24-years-old, he has experienced so much that he now has the opportunity to share what he has learned with the world, while making an attempt to change it.

“From a soccer standpoint, I think Venci is a representation of my journey. I mean, for me, personally, my journey was to go overseas at 17 to play in Spain, not knowing the language, pursuing my dream, per se and turning it into a reality. Now, I’ve ended up here in Minnesota.. So for me, it’s just… how do I experience and express that journey so the fans can see, you know, because the fans just see us on the pitch. How do I relate to them to me, as a person, so they can see me as I am on the field, but also off the field.”

Taylor feels that he has found a home in Minnesota, and that signing his contract with Minnesota United was part of this bigger picture. By being here and playing for the Loons, while also managing Venci, he’s creating a future where he knows he will find success.. on and off the pitch.
Taylor reiterates “We’re more than just athletes.”