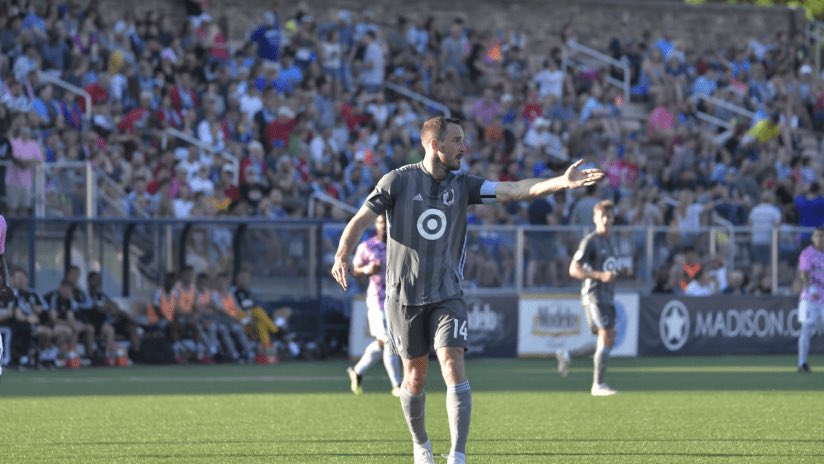 Due to the Covid-19 pandemic, the Open Cup was not played in 2020 or 2021, however, it has now returned and the Loons open up their Cup run in the round of 64 versus a club that once felt like their “little brother” in Forward Madison of the USL League One.

The winner of the famed tournament gets $300,000 in cash, a shiny trophy and an automatic slot in the Concacaf Champions League. The winner Wednesday night gets the first real opportunity at bragging rights in what could become a budding inter-league regional rivalry.

Loons coach Adrian Heath confirmed that Designated Player Adrien Hunou and goalkeeper Tyler Miller will start for MNUFC, while defender Chase Gasper will get minutes on the pitch at some point in time in Madison.

Heath added that the entire squad, minus “five or six” players, will be traveling to Madison and will be available for selection. On Tuesday, attacking midfielder and homegrown product Aziel Jackson was practicing with the first team after recent performances with MNUFC 2 had impressed. Jackson has two goals in four appearances for the MLS NEXT Pro side.

“There’ll be a mixed team, but there’ll only be five or six players left behind. Okay, the rest of the summer will start on the bench. And we’ll need if we’ll bring them on if needed. And some will get a bit more minutes because we feel as though they need a little bit of play… But mindful of the fact how important another old game is on Saturday,” Heath said.

For Heath, it will be his first time traveling to Madison and being on the touchline at Breese Stevens Field. However, it’s familiar ground for multiple Loons players who have had loan stints there and a 2019 friendly saw the two sides go head-to-head at the Flamingos home ground.

“Well, we will always treat it with the respect that it deserves, as with all these competitions I think in American soccer, and I always did as a USL manager because I knew how important it was for us as a club to try and develop. And you know, that’s one of the things I spoke to the group about today. The one thing I do know, tomorrow, is that if we do not approach the game properly, it will be a really difficult evening for us, because that’s the nature of this tournament.”

Chase Gasper, Hassani Dotson, Romain Metanire, Brent Kallman and Abu Danladi are the only remaining Loons who were part of the roster that made it to the 2019 edition of the U.S. Open Cup, with the Loons falling to Atlanta United in the final.

The Mingos are coming off an impressive last US Open Cup run of their own, advancing to the fourth round in their inaugural campaign in 2019, being the last remaining third division club in the tournament.

This 2022 Forward Madison roster, and coaching staff, could not look any different than that of three years ago, but they seem to be just as capable of making a deep run with brand-new head coach Matt Glaeser at the helm.

“It’s always exciting to play an MLS team and be able to host them,” says Glaeser. “Hopefully we can show [Minnesota] what we’ve got a little bit and make the game nice and competitive and worry them a little bit.”

With only a friendly vs. UW-Madison on tap this weekend and no league matches until April 30, Madison will have the advantage of freedom with their roster selection that most clubs may not with more compact schedules. Couple that with approximately a dozen players with “next level” experience in USL Championship, MLS, and international top flights, and the Mingos may prove to be a tough out on their home field.

Atop the names to watch out for is Nazeem Barton. The 2017 MLS SuperDraft selection has netted a pair of goals off the bench for Madison in the early going, including the dagger to seal their 2nd round win over Cleveland SC. The 28-year old is in great form and will definitely ask some questions of the Loons’ backline.

In the defensive third, you need not look any further for impact players than Eric Leonard. Having been in Madison since the club’s inception in 2019, Leonard has not only made a name for himself in service time, but also by being a top-tier USL League One defender year after year. If Minnesota are unable to get off to a fast start and nab an early goal, expect the home side to put the clamps down defensively and make it a tough evening for the travelers’ attack.

One final note is the weather is going to be absolutely terrible for this one. As of this writing on Tuesday evening, the forecast calls for a 90% chance of rain, 20 mph winds, and a balmy temperature of 47-degrees at kickoff. An equalizer? We will certainly find out.