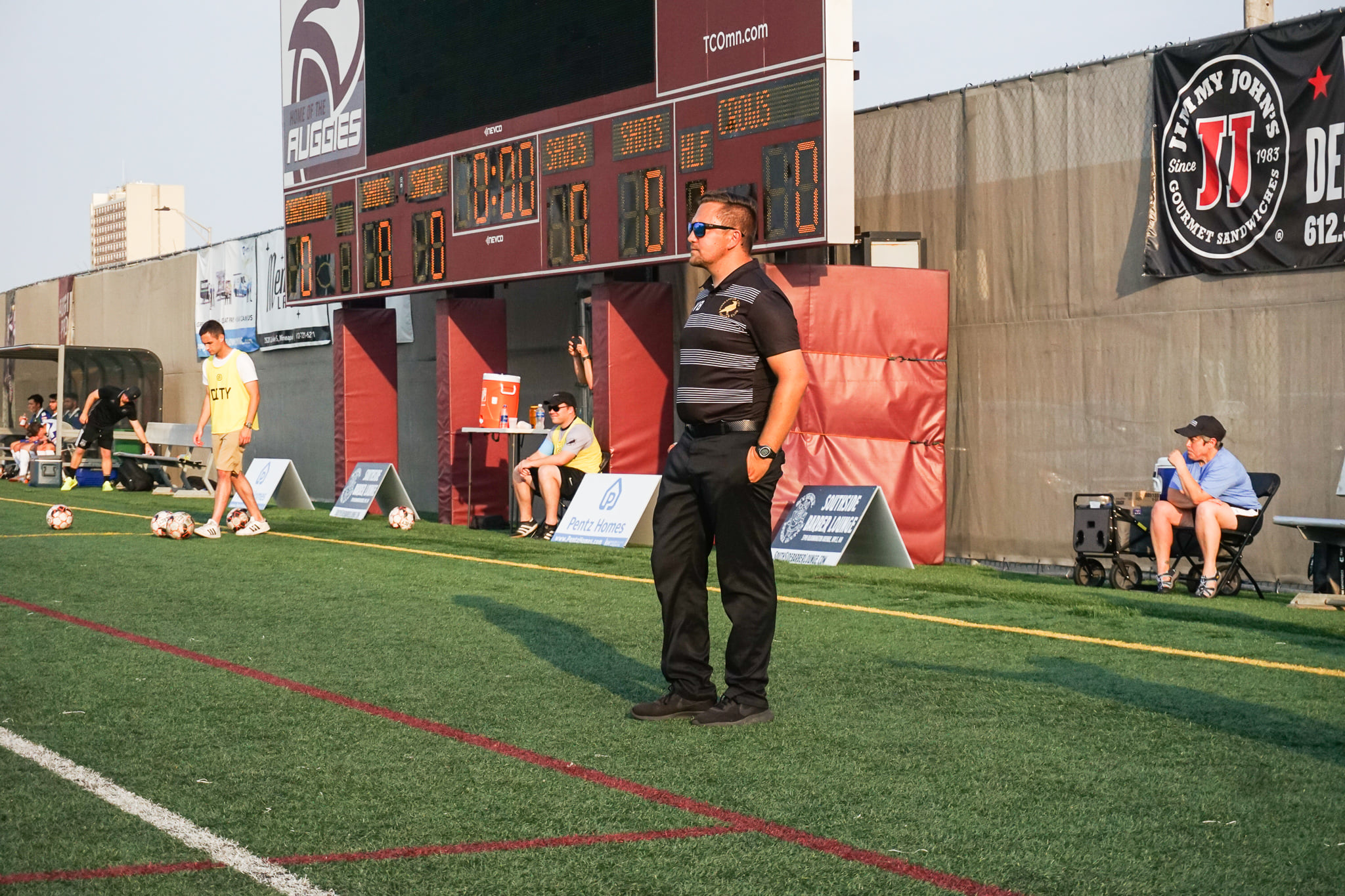 That’s the common word used to describe this new format in which Minneapolis City SC is taking on their 2022 season. With one “senior” player pool set to compete in both the traditional NPSL North and brand-new USL League Two seasons and the Futures Program taking over their presence in the UPSL Midwest-West.

As all three seasons kickoff this week, Head Coach Matt Vanbenschoten sat down with Sota Soccer to discuss how the organization is set to handle such an unprecedented summer.

Jeremy: It’s an exciting time, as always, just a couple days removed from the from the beginning of both seasons here. A really invasive question to kick things off here. But how are you feeling about the season?

Matt: I think we’re feeling really good about it. It’s going to be a very ambitious undertaking trying to play in two weeks. Three leagues even with the futures but, you know, we’re nothing as a club if we’re not ambitious. I would say if we if at any point become kind of complacent, that’s probably the point that we die and cease to exist. We may find out in a couple months if we’re geniuses or idiots, and, you know, it would be on full display. But we’re feeling good. We’re very excited.

Jeremy: The line between genius and idiot is a very fine one. But as we mentioned, the USL League Two season kicks off Sunday versus Des Moines, a team that you guys have already played back in March in the US Open Cup, you guys would obviously fall to the defending league champs in that match. Did you learn anything that you can apply to Sunday’s match? Or was it so early and far removed from the season itself that it’s hard to really take anything from that?

Matt: I think if we learned anything was probably just more about ourselves, when we’re playing against really high caliber players like that, I think, for Des Moines at least, their roster will probably change from what the Open Cup was, and we’ll see if their style of play changes at all. So it’s hard to know what they’ll come out with. But I think again, it’s just we’ve learned the deficiencies that we need to address and how we can be better and what we’re trying to do. That’s the fun part of lower league soccer is especially early on. It’s kind of all for grabs, and you have no idea what’s going to happen. We know that they will be very good because they’re Des Moines and they will have a lot of quality. And it should be a lot of fun.

Jeremy: One of the differences in the roster this year is that there’ll be a little bit more non-Minnesota talent on the USL League Two side and maybe we’re used to seeing in the NPSL with a handful the new guys from places like Green Bay and Detroit. As far as the scouting process this year compared to years past, are you leading the charge on this? Is there a lot of travel involved? Sort of walk me through that process and how it was gonna be different this year than the past?

Matt: Yeah, in terms of that, we do want to try to stay as local as possible. Even though we we have some guys who are playing in some very good colleges, try to still stay very local with those guys. I’ve said this before, this is the first time I really kind of had to go out and recruit some guys and kind of pitch them on, you know, hey, we’re gonna be in USL2. And there’s a little bit of just a different perception amongst college coaches and players and t’s just deemed as a little bit higher level of competitiveness and which I think across the board maybe that may be true in terms of the top to the bottom, in terms of the depth, but again, NPSL is still a great conference. I mean, you saw from Ben Bender, the number one overall pick [in the 2022 MLS SuperDraft}, like it doesn’t matter which league you’re in, but from from from certain colleges and certain coaches and players alike, the perception matters. So yeah, we had a lot of conversations with a lot of guys. You know, like Rory O’Driscoll we just announced and had a conversation with him where we sat down and said, “Look, I know you’re going to be playing pro at some point. Here’s what we can offer you. You can come live at home and play with your brother one last time before you move on to bigger and better things.” I think city is really attractive for a lot of these guys is they do get to be home. There’s something about getting to stay with your parents one more time and having homemade food and all that which which is huge, and especially when you’re put in such a high pressure high level environment all the time from college into summer, there’s something the ability about to just kind of have a home base and reset a little bit to kind of just get your bearings straight. So that was pretty easy from a selling standpoint.

Jeremy: USL league Two’s moniker, “Path 2 Pro”, providing players sort of that that platform to get them to the next level. Can you guesstimate how many local guys on your roster are going to be on your roster because you guys are in USL League Two as opposed to NPSL? Guys that maybe would have gone to other USL League Two clubs had you not made that step up?

Matt: Oh, absolutely. We saw that even in years past where some of our other guys like a Bernard Assibey-Rhule went down to Houston for a couple years and and just wanted to try new environment, get out of his comfort zone. And so I think now that we’re in USL2 it’s really attractive for a lot of guys. So yeah, I would say there’s definitely a handful of guys that like the fact that we stepped up into this league and even the fact that we’re able to play in two different leagues I think was a big pull for a lot of guys. So just the ability to be in a high level environment to be playing with guys who are really high caliber and still be able to get minutes is a huge draw.

Jeremy: You guys have been talking about this huge player pool that will play both in USL2 and NPSL and a lot of mixing and matching depending on the schedule. Well, we’re gonna get that first real test of that this weekend, because not only is the USL League Two team debuting on Sunday, but you have your NPSL North opener on Saturday night at the [Minnesota] TwinStars. Will there be any guys who overlap and at least dress for both matches? Or are we looking at a completely different 18-man rosters for each match?

Matt: It’s a great question. For sure this first weekend just because we don’t have all of our guys back, which every team won’t, we are gonna have some guys double-rostered on both NPSL and USL2. So that’s that’s been an interesting dynamic already just in terms of roster selection, and then the conversation between us as a staff, “Okay, so how many minutes is this guy gonna play? Where do we see him fitting in between different lineups.” So it’s a different factor, but it’s a nice luxury for us to have especially early on where we can kind of mix and match a little bit and get guys in and be intentional about how we play them.

Jeremy: How’s Jon [Bisswurm] feeling going into this weekend? Is he calm, cool and collected? Or has he locked himself into a closet?

Matt: Ah, I mean, you know, he’s Jon. He’s from Wisconsin. So he’s pretty resilient. So yeah, I think he’s doing all right. Here’s his jam: He doesn’t have to do a lot of the day-to-day stuff. He gets to plan and, you know, look over the roster, have a couple beers before he goes. So he’s always in a good spot.

Matt: it absolutely will be exciting. Never a dull moment.