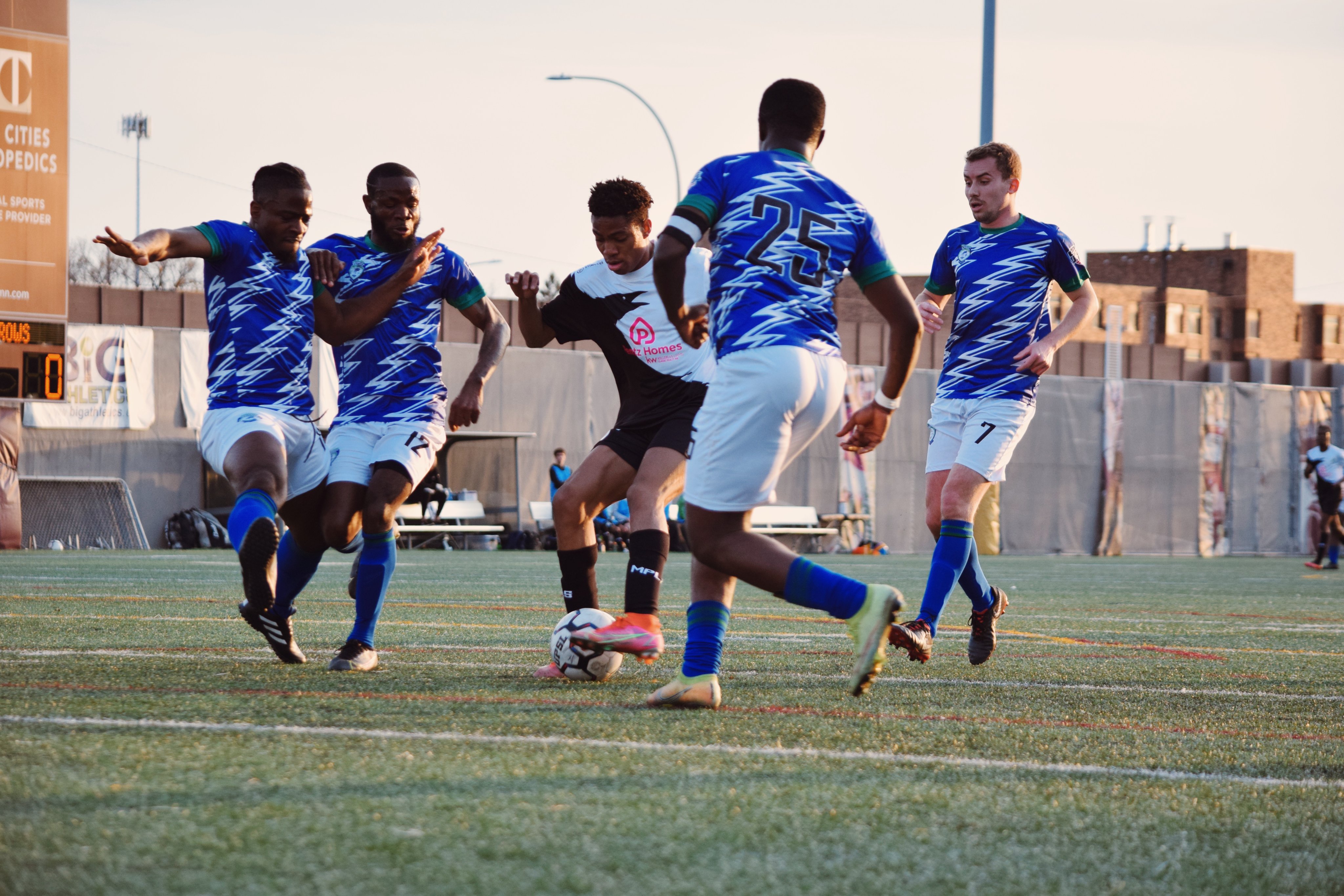 Second Round Matches (May 4th)

It was another wild night for new UPSL side Austin Villa, who took on their neighbors from Rochester in their biggest victory yet. Leading 2-0 at half time, the hosting Austin Villa kicked it up a gear in the second half and found three more goals before the full time whistle. Bernardo Torres was at the forefront of the attack, scoring the second and third goals on either side of half time.

As Rocky Hulne of the Austin Daily Herald notes, the match was also won by a list of local Austin graduates, including Julio Hernández (1G), Andres Garcia (1A), and Mooday Wah (1G).

Austin Villa have yet to concede a goal and have peppered opposition with goals, going 7-0 across their two home matches. The one asterisk for the side can be found at the end of that sentence; we have no idea what this team will look like on the road, especially on the longer trips the UPSL Midwest-West provides.

That said, it’s a dream start. For Rochester, this is the opposite of how they’d have liked to kick things off. That said, one bad game can be written off by a strong course correction. This side has enough local roots to make a stand at home with a sense of purpose and pride. We’ll have a clearer sense of how competitive Rochester FC is once we have a few matches in the log.

It was another unsuccessful chapter in Ebusua’s opening homestand for their debut season in the UPSL, falling 1-2 to Granite City. The hosts expected a tough year ahead in the offseason, so few should be surprised they’re having a hard time against veteran UPSL sides.

Ebusua started the match, as they did their last, with the opening goal, but gave way to a Granite City comeback. The hosts should be encouraged by the fact they’ve held both sides to 1-2 losses, especially with the way Vlora beat Maplebrook this round, but the hosts will of course be hoping to find their way to some points.

Club founder Cyrus Wilson made it clear in a previous interview that this season was always going to be a project, stating “The goal is to maintain our presence in the UPSL and beyond. The only way we can do that is to take steps toward [those goals]. The preparation we’ve done is to get the boys to gel together and understand our game plan, our strategy, and to understand our identity, how we want to play the game. We’ll focus on that and get the right talent for what we want to achieve.”

For Granite City, it’s a great response to their opening loss. The St. Cloud club can now focus on building off this first win instead of searching for it.

Minneapolis City, whose Futures program is leading the charge for them in the UPSL this season, was always going to be a side to watch this year given their unbeatable presence last year and playoff run. Well folks, the kids are alright.

City opened their campaign with a clean, 1-0 win over Brooklyn Knights, the side that gave them the most trouble across the season in 2021. It’s a serious show of intent from the Futures side, who will surely expect to meet the expectations made by Minneapolis City 2.

The opening goal came from Loic Mesanvi, the young star that scored one of City’s goals in their US Open Cup match against the Des Moines Menace. A shift over to the UPSL didn’t slow Mesanvi down as he netted this close range finish.

For the Brooklyn Knights, it’s a tough and early blow to their first place hopes, but the side can still hope for a strong season if they find their form in the following matches. It’s fair to say that 1-0 will probably be far from the worst damage dealt by Minneapolis City this UPSL season, and the Knights will have plenty to contend for in their home match against the Crows, along with their matches against other powerhouses like Vlora FC.

Vlora continue to look one of the sides to watch out for this season as they breeze past Maplebrook in their home opener for 2022. Having grabbed a tight win on the road against Ebusua, we now have a glimpse of what the side can look like at home, and it’s quite a glimpse.

Vlora, down a man for a fair poriton of the match, were able to confidently take a 2-0 lead before slotting home two more goals in the matches final minutes. Perhaps the most impressive goal was the third, which saw Suad Sujić, who has four goals this season already, score a halfway line golazo.

It’s fair to say the 2019 division champs are looking to bring back some success to their UPSL side and Brooklyn Knight’s early loss already helps clear a path for a title run.

There is, of course, lots of season left to play. For Maplebrook, it’s a hard pill to open the season, but they’ll hope to find some form as they move on from the clear title contenders and play clubs expected to finish in the mid to lower table.

Third Round Matches (May 7th)

The Young Stars made it six points from two games with their first road win of the season, continuing a run of eventful wins. The comeback result means DYS will stay in reach of a title bid against the top sides from the Twin Cities.

The main concern for the Dakota Young Stars going forward will be the fact they’ve conceded so many goals along the way. For scoring seven goals in two games, you’d expect a side to have a better goal differential than +2. If they can clean up their defensive act, the boys from out west may have a real chance at upsetting the current hierarchy.

For Turbo, it’s a less welcome start to 2022, but there’s some mild positives to take home. The hosts certainly found some goals on the night and lost to a team that seems quite good going forward.

After starting 2022 with a loss, Granite City have stepped up and found six points in one week, all on the road. It’s an impressive run of form for the St. Cloud club, who are keeping themselves close to the more clear title contenders through resilience.

While Granite City continue to concede every match, their attack is finding its feet and has five goals this week. This weekend’s win is largely down to a Muhammad Keita hat trick. Keita, in fact, has scored all of Granite City’s goals this season.

For Maplebrook, the struggles continue. After being easily bested by Vlora, they return home only to concede three more goals and lose all three points. It’s far from over, but they’ll need to fix issues at the back if they want to stay competitive against the Midwest-West’s top sides.

Vlora secure nine points in seven days as they find yet another win, this time 1-0 against the Brooklyn Knights, to make themselves clear competitors for the Midwest-West title this season.

For the Knights, it’s a tough double loss week to start 2022 after having been so competitive in 2021. It’s far too early to lose hope, but the hosts haven’t had the same magic this season so far and have lost to both of the other favorites for a title run.

Vlora won’t play again until the 15th, when they host Minneapolis City. It’s a much needed break after such a packed opening to the year, but the fourth match of 2022 could prove their most important. A win against City could leave the 2019 Midwest-West champs the frontrunners.

Both sides get their first point of the season in this one, a tough draw to end Ebusua’s home stint. For Ebusua, it’s a massive point. It’s their first ever in the UPSL, which was in itself a major jump for the organization. It also writes off the potential issue of a debut season without a point.

The club will now have to look for ways to make a draw out of matches like their first two, 1-2 losses at home. If Ebusua can find points in tight games, they can quickly become a genuinely competitive part of the Midwest-West. Their next test is away to FC Minneapolis, a high hill to climb in that pursuit.

For Rochester, a point on the road will heal some wounds from their 5-0 loss to Austin Villa, but they’ll likely wish they hadn’t been Ebusua’s first ever UPSL point. The club has plenty of promise in its locally-focused squad, but 2022 has started all but well. They’ll return home this week to host Maplebrook in what could prove a great opportunity to earn their first win of the season.