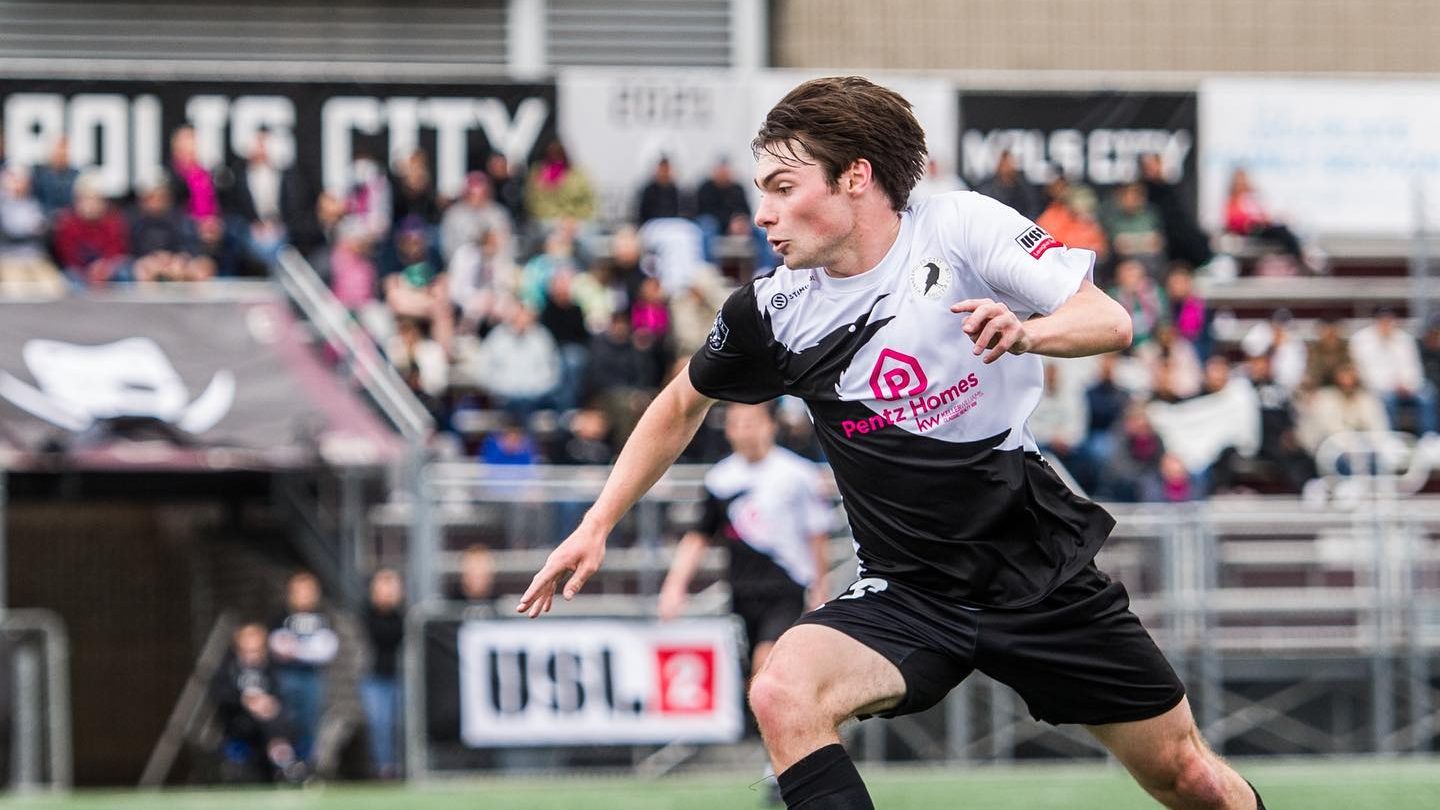 A windy Mother’s Day afternoon served as the USL League Two season opener for hosts Minneapolis City SC against the Des Moines Menace. Six weeks ago, these two sides played in Des Moines for the US Open Cup, with the home team cooking the Crows 4-2. Sunday in Minneapolis, the Crows hoped to show the Menace their style of home cooking. However, the Menace feasted again winning 2-0 away.

Both teams tried to stretch Edor Nelson Field to their advantage with long balls over the middle. These long doughy stretches were spaced by the abrupt kneading of short progressive passes. However, both teams filled the midfield and made it hard to progress the ball.

In the 15th minute, the Menace forced a midfield turnover. Menace attacker Fernando Garcia dribbled and shot hard just wide from about 25 yards out. Back the other way, the Crows earned a freekick just outside the 18-yard box. RM Luca Contestibile hit an inswinger to the near post. Minneapolis captain Aiden O’Driscoll may have been able to head it, but Menace CB Malik Smith played tight and deflected the ball away from danger.

In the 23rd minute, Crows GK Martin Sanchez made two saves. Menace captain Ryley Kraft blasted a cannon. Seconds later, Fernando Garcia made a nice run, but his diagonal shot stayed on the pitch, and Sanchez made the save easily. Most of this opening bread course consisted of stretchy doughy texture but lacked flavor.

The breeze was cool, but cool heads did not always prevail. The latter part of the first half, tempers got heated like a plate of hot nachos with plenty of chili powder and sliced jalapeños. In the 25th minute, O’Driscoll fouled Fernando Garcia about 35 yards out. The ref allows advantage but then quickly blows the whistle. After the whistle, Menace midfielder Eliot Goldthorp continues to dribble and kicks a hard shot into midsection of Crow CB Tyler David. David, already on a yellow card, shoves Goldthorp. No cards were issued, but Ryley Kraft took the freekick for the Menace. The ball took a friendly bounce 3 yards out and beat Sanchez high left corner. The first half issued 3 more yellow cards, 1 for Minneapolis City, 2 for the Menace. There were no more goals, and Des Moines led 1-0 at half.

The second half continued the spicy theme like a proper Szechuan Beef. In the 48th minute, Crows Captain O’Driscoll with a clever nutmeg, dribbled out of traffic and hit a long pass to forward Nils Gulbranson. Menace GK Victor Mekela came way out around 30 yards out and collided with Gulbranson, earning a red card. Sub-sequently, Des Moines subbed out Fernando Garcia and put in backup GK Joey Batrouni. The Crows tried to take advantage of the extra player. After a series of passes in the attacking third, O’Driscoll passes square to defender Sydney Tume who hits a shot from 20 yards out, which missed high.

Two more yellow cards soon followed. In the 55th minute, Menace’s Kori Cupid defended Dom Mesdjian with a swim-move shoulder-pull takedown. In the 62nd minute, Crows attacker Zach Sussee slide-tackled late and picked up a yellow of his own. In total, the referee handed out 6 yellow cards and 1 red card. Like yellow hot mustard and red chili crisp, spicy stir fry was in the mix.

The Main Course: Meat and Potatoes — or Formations

In the 67th minute, Menace midfielder Kori Cupid played a through ball to Luca Nedic. Sanchez made the save on Nedic but Menace midfielder Luis Maestre corralled the deflection and passed to Eliot Goldthorp. Goldthorp ripped a shot that appeared to touch the inside of all 3 sides of the woodwork before crossing the goalline.

Both teams made a few more subs — not from Ebert’s and Gerbert’s — but there would be no more flavorful goals. The match ends: Minneapolis City 0, Des Moines Menace 2.

Des Moines assistant coach Adam Kay regarding their adjustments after going down a player:

“Our boys understand it’s very important for them to slow the game down in good moments and keep possession of the ball instead of trying to keep doing what we were doing originally with 11 men. So yeah, the game management from the boys today was actually fantastic. We got a couple of older heads, like Ryley Kraft in the middle. He just kind of settled the game for us and kept the ball moving, made sure that we were putting the ball into good areas.”

Minneapolis City captain Aiden O’Driscoll on the difficulties to score after going up a player:

“We didn’t make good runs in the attacking third. We needed quicker movements to move them off, and we didn’t use our width to create space in the middle.”

“It’s an unfortunate result. Obviously, we wanted to come out and represent the club well, to get the win here on our home field in our home opener. I thought we did some things well. It’s our first game, so we’re still getting into the groove — but a lot of positives to look forward to, and hopefully, we keep going forward.”

My last visual of Edor Nelson Field was Minneapolis City chairman Dan Hoedeman picking up trash in the stands and hauling bags to the dumpster. Certainly, Minneapolis City will want to clean up their mistakes and move forward. The Menace will want to clean up their mistakes too, including all the Mother’s Day cards no one wants to receive. In the end, the visitors can savor another 2-goal victory against the Crows.