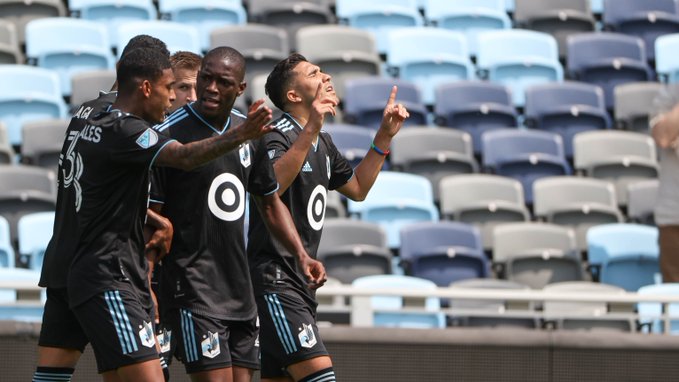 Substituted into the match in the 65th minute, Emanuel Reynoso scored an 87th minute solo GOLAZO for Minnesota United, eliminating the Colorado Rapids from 2022 U.S. Open Cup contention in a 2-1 victory at Allianz Field Thursday afternoon.

The Argentine designated player danced on his tiptoes, smirked a grin and beat two defenders in the box on his way towards the net. The shot came off his left foot and made its way into the bottom left corner of the net past Rapids goalkeeper Clint Irwin.

Originally scheduled to play Wednesday evening, only 17:30 of the 90 minutes was able to be played due to inclement weather in the Twin Cities. The match was delayed for over two hours and eventually called for postponement until 1:00 pm CT on Thursday. A flooded Allianz field pitch drained overnight, as the land of 10,000 lakes saw heavy rainfall, wind and storms all throughout the night.

The restart saw both sides start from the 17:30 mark with the same exact XI that departed the pitch Wednesday evening due to the weather delay. A massive change in temperature and field conditions saw Thursday’s contest being played in sunshine and 84 degree heat on a damp Allianz Field.

Each team found the back of the net once before the weather delay Wednesday evening, with Abu Danladi opening the scoring for the Loons in the 8th minute and Rapids midfielder Nicolas Mezquida equalizing in the 15th. It was Danladi’s second against the Rapids in all competitions this season.

A relatively level match throughout, the Loons were reduced to 10 men in the 83rd minute as defender Brent Kallman earned a second yellow card after taking down Jonathan Lewis outside the Loons box. 10 proved to be their lucky number, though.

Despite being reduced to 10-men, the Loons #10 produced a moment of magic to move them forward and into the next round of the Open Cup. Reynoso’s on-field intelligence and silky-smooth footwork produced the game winner and eliminated the Rapids from 2022 Open Cup contention.

The Loons opponent for the round of 16 will be announced Thursday evening at 8:30 ET on ESPN+ on Fútbol Americas along with the other 15 remaining sides.

So on that note, see you in the next round, Sporting Kansas City.