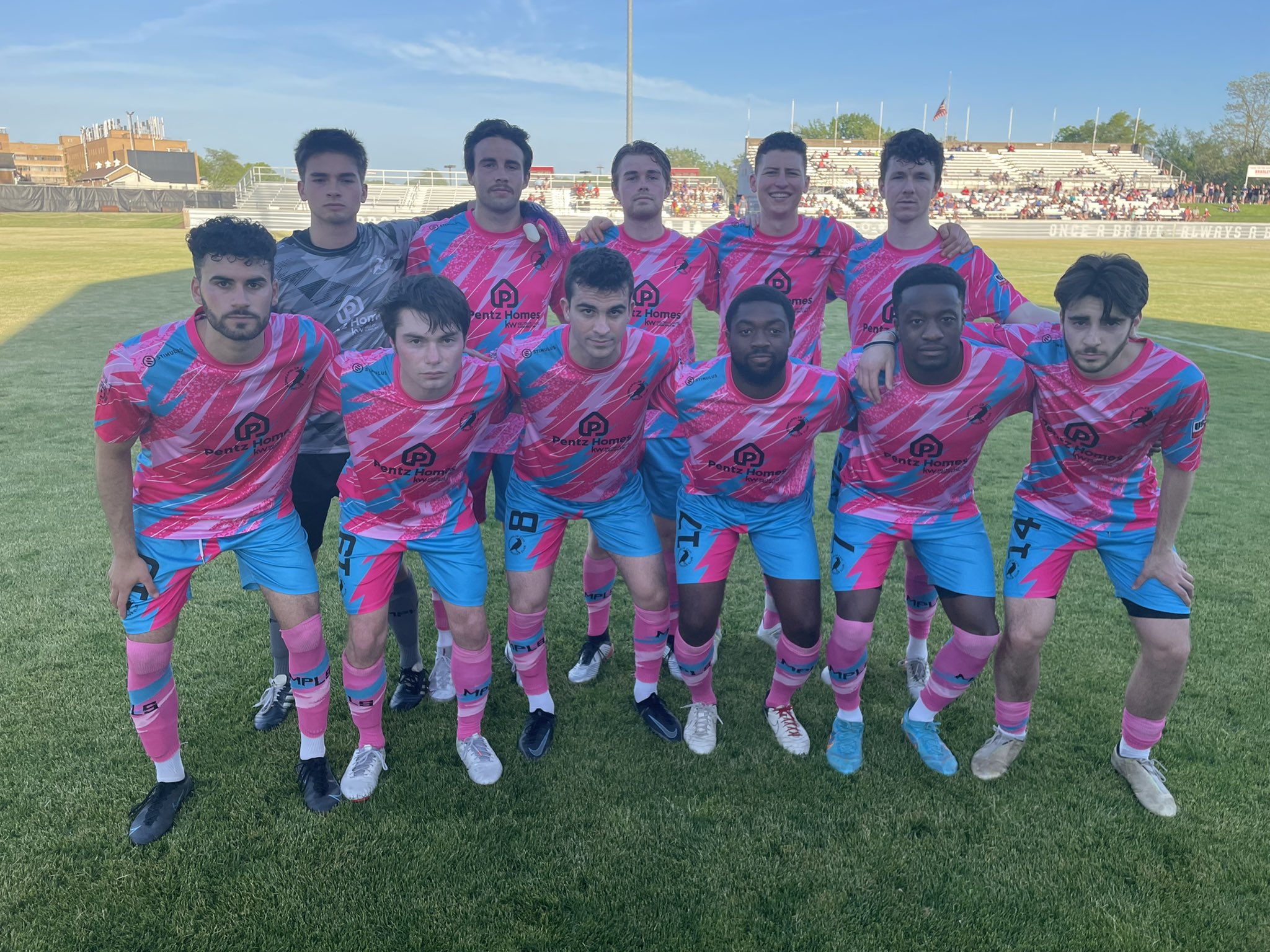 Peoria, Ill. – Facing the threat of a winless start to USL League Two play, Minneapolis City SC came away with a road tie thanks to a late stoppage time goal by attacking midfielder Eli Goldman.

As they had kept fighting through a pair of deficits, the Crows continued to play on through a potential foul call leading to a counterattack.

The ball got played wide and then into Sydney Tume and as the defender came in the ball went to Goldman from 12 yards out in the 94th minute.

The goal, Goldman’s second of the match, gave the Crows their first point (0-1-1), and upset home Peoria FC’s celebration in their debut (0-0-1) on the road on Saturday at Shea Stadium in central Illinois.

Notably, initially the official had made the call for just 2 minutes of extra time before conferring with others and it was changed to 5 minutes.

“That’s just soccer sometimes where if you get the opportunity and the break you have to take advantage of it,” said Minneapolis City head coach Matt VanBenschoten. “And we certainly did.”

Goldman had played more of an attacking center-midfielder role for the Crows and University of New Hampshire in the past.

“He’s going to be a really greatly effective for us,” said VanBenschoten. “He’s very dynamic, he’s very willing to hold defenders off his back… This shows how good he is. He’s been with us one training session since he got back and came out, played 90 minutes and scored two goals. It speaks really highly of Eli as a player.”

A red card around the 87th minute did give the Crows the man advantage, but they seized on it as well getting some chances on a few corner kicks and a long throw by Jack Barry to “create chaos” according to VanBenschoten.

“The last 10 minutes were our best and kind of hoping how we would play the entire game,” he said. “Just put our foot on the throttle a little bit more.”

Forward Gervork Diarbian’s second half penalty kick goal in the 54th minute as a result of a hand ball on a cross was seemingly the winner, before Goldman’s heroics.

The Crows had persevered through adversity in the first half of the match, falling behind early as Gustavo Rodriguez put Peoria City on top in the 10th minute with a shot from the top of the box in the upper 90 from an assist by Diarbian.

Goldman then scored the first USL League Two goal for the Crows, chipping in the equalizer in the 24th minute. The goal came as a result of the forward Peoria attack as the ball was played through in over the centerback.

“Eli did a fantastic job,” said VanBenschoten. “Just over the oncoming keeper and it was a nice finish.”

VanBenschoten said the way his team finished the match should be how they should play throughout.

There were a total of about eight yellow cards issued in the match, but VanBenschoten attributed that more to the teams playing hard.

The Crows’ normal home field, Edor Nelson, will be having some work done and won’t be available.

“I’m optimistic for this Friday,” said VanBenschoten, as his team to continues to improve. “Now that we know the tools they have it helps us match up against them… If we continue to get rid of [self-inflicted mistakes] we will be very competitive. I think we are in a good spot. To get that late equalizer is huge for us and builds a lot of momentum.”

In simultaneous NPSL action, Minneapolis City SC (1-1-0) fell to Duluth FC (2-0-0) on the road, 2-0, on Saturday at Public Schools Stadium. Felipe Olivera scored in the 9th minute for the winner and Sam Thornton tacked on another goal in the 49th minute.