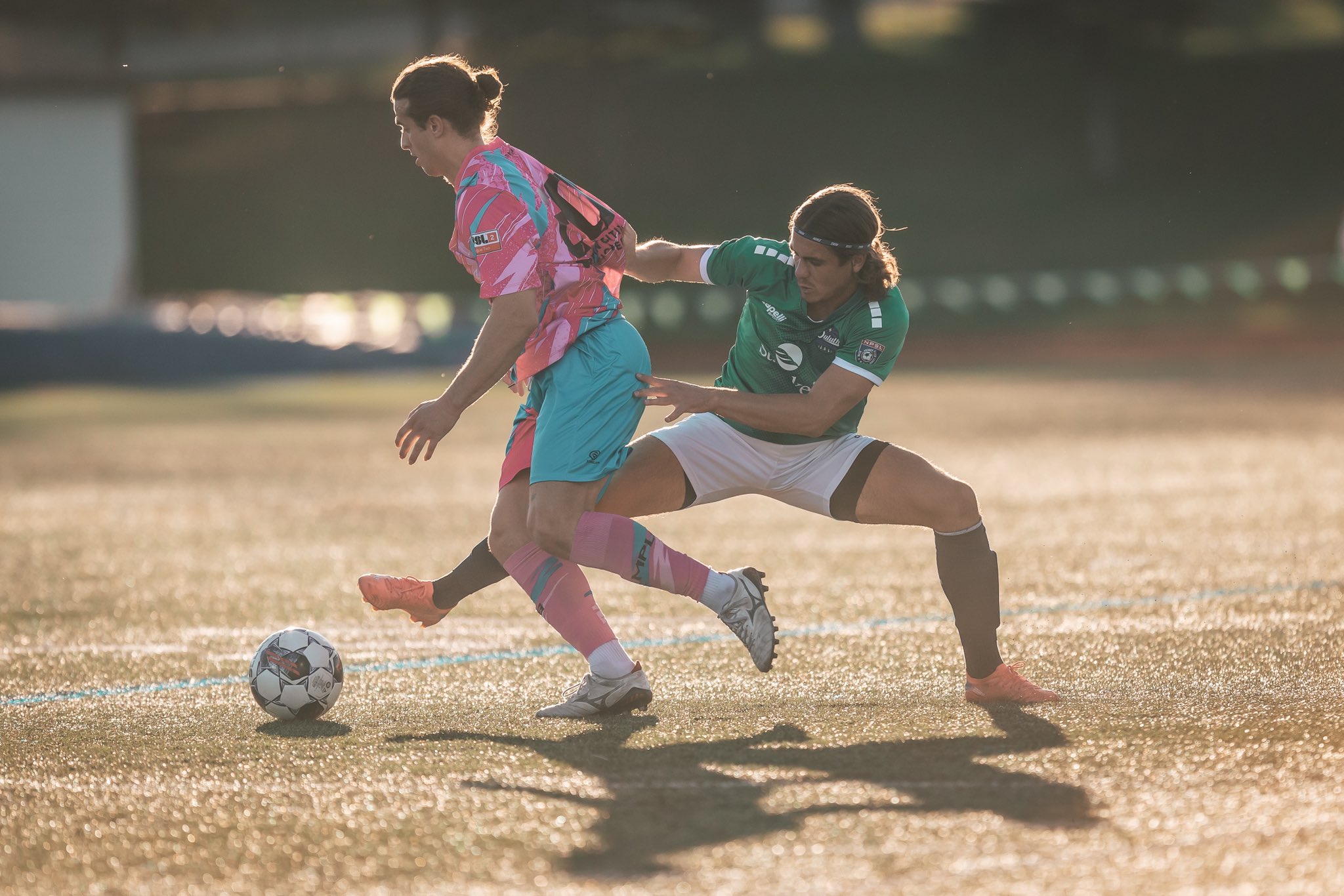 It doesn’t take a title race to make meetings between Duluth FC and Minneapolis City an occasion. From the clubs’ respective founders and culture to their often parallel silverware-ridden campaigns, meetings of the NPSL North’s historically top two clubs always prove eventful.

It’s perhaps deepened by the fact that the two sides have had good runs of form at the other’s home. Duluth drew at City in 2017, an important point in their North title run, and put a pause on one of Minneapolis City’s more prominent undefeated runs with a 2-1 win at Edor Nelson in 2019. City have had plenty of fun in Duluth as well, particularly in more-or-less title clinching wins against Duluth in 2019 and 2021, the latter a 6-1 over a 10 man Duluth FC.

The two clubs have also, of course, met in the 2018 NPSL Midwest playoffs in Ann Arbor, Michigan. Duluth won that match 2-1 in AET, before going on to become the only club to this day from the North conference to win the regional title.

It was with this history that Duluth FC hosted Minneapolis City this weekend. Both teams started their 2022 campaigns with a road win, Duluth 6-0 over Joy Athletic and City 2-0 over the TwinStars, but this matchup was always going to tell more than those respective season openers.

This weekend’s match up would start eventfully, with both sides playing physical, high energy football from the kick off. Both sides would immediately create chances, and some fouls, before Duluth’s Felipe Oliveira opened the scoring in the ninth minute. One of Duluth’s returning players after a few appearances for the club last year, the former Duluth Portside man got on the end of turnover-turned-chance near City’s box, confidently slotting the ball past the keeper for his second goal of the season.

City, who in general played a good game of football, wouldn’t let the goal stop them from pressing for an equalizer, but the momentum shift did begin to show as Duluth came close to finding their second on several occasions before half time. Despite this, it was only 1-0 at the whistle.

The start of the second half proved plenty eventful as well, with both sides getting right back to the rivalry state of mind that had fueled the first half. It would be half time substitute Sam Thornton who would create the decisive moment as he slotted in Duluth’s second goal in the 50th minute. In a match full of sloppy, physical moments and plenty of turnovers, it was Duluth that found ways to capitalize.

Duluth would come close to scoring more, with Aaron Pike and Blake Perry both coming close to adding their touches to the scoreline, but it would end 2-0 in Duluth’s favor, the only team to win its first two matches in the NPSL North this season.

Duluth’s biggest area of quality on the night, however, was perhaps at the back. Veterans Brendan Dally and Martin Grzywa, captain on the night, performed well, but it was newcomers Jessie Suarez and Santiago Erazo, right back and center back respectively, who made the biggest impact on the night. Suarez relentlessly started attacking moments for Duluth, while Erazo was an immovable giant at times, calling back to Duluth FC veteran Gonnie Ben-Tal at times with his height and control.

For Head Coach Sean Morgan, the efforts made to collect a special group of players that fit each space Duluth needed has resulted in a group that is responding to him at record speeds, resulting in an essentially perfect start to the season.

“We recruited specific types of players this year. I think the biggest difference I can see is that we’re very comfortable on the ball, we’re great under pressure. We haven’t had a great deal of time to work with these guys. We had pretty much the same starting eleven today as the last game, we made one change with Peter. We had seven or eight guys come in on Wednesday… tactically the boys are a step ahead this year.”

Morgan also noted that he’s pleased by the impact local players like Blake Perry are having, but made it clear that their quality gets them minutes, not their locality.

“It’s fantastic, that’s the goal for us, to have more of a local feel to a certain extent than what we’ve had the last couple of years. It’s not just putting guys in because they’re local, Perry deserves to play because he works very hard in training and his quality… he’s a huge asset, he’s so dangerous, all the time.”

Finally, Morgan told Sota Soccer that the result didn’t change his mentality for the season, which is to take it one match at a time.

“Nothing changes man, we take it game by game. We set goals for ourselves at the beginning of the year, and we just take things as they come.”

How the North Played Out

Joy’s opening match, a 6-0 loss to Duluth, left much to be desired for this promising squad built on local talent. Joy weren’t able to play the way they wanted, and their defense was not prepared to take on the pressure usually placed on their attack. Their next match against a visiting Fusion was set to be a big chance to realign.

The Fusion arrived having earned a solid point on the road last week against the Sioux Falls Thunder, with new head coach Sam Winning still tuning his squad of top notch, new talents to the nature of the NPSL North.

It would prove to be Joy’s day however, as a Caputo brace and goals from Kroeten and Kantorowicz would add up to give the club its first win of 2022 in 4-1 fashion. It’s a perfect response to week one’s dramatic loss and leaves Joy’s fate concerning the NPSL North table very undecided.

Having barely beat La Crosse Aris, Med City’s second match of the season was always going to be a vital chance to show how much quality they really had. Always projected contenders for the title, Med City would need more than 1-1 at half time against Aris to make those projections a reality.

The concerning start wouldn’t end at week two, as the Sioux Falls Thunder drew Med City 1-1 in Rochester. The hosts took a late lead, after leaving it 0-0 at half time, but the Thunder managed to equalize before the deal was done. The South Dakotans now have two hard fought points from two weeks, while Med City have four points from a homestand that has seen them play the North’s weakest sides historically.

Missing some of their best talents when they lost 2-0 to Minneapolis City, the TwinStars were handed a chance at redemption against an Aris side that looked competitive in week one against Med City.

It would prove a good night for the TwinStars, who secured a 4-1 win over Aris to secure their points of 2022 while also sweeping away their lacking attacking output from week one. All the while motivated by a Mark Boquin brace along with goals from Pe Carlos Gbamy and Abraham Kuyateh. For Aris, it’s a tough follow up to a good first week, though the side will likely be happy to be consistently scoring on the road.

Note: While the TwinStars state this match ended 4-1, as does the livestream data, the league report says it ended 4-2. We are unclear as to what miscommunication may be at play.