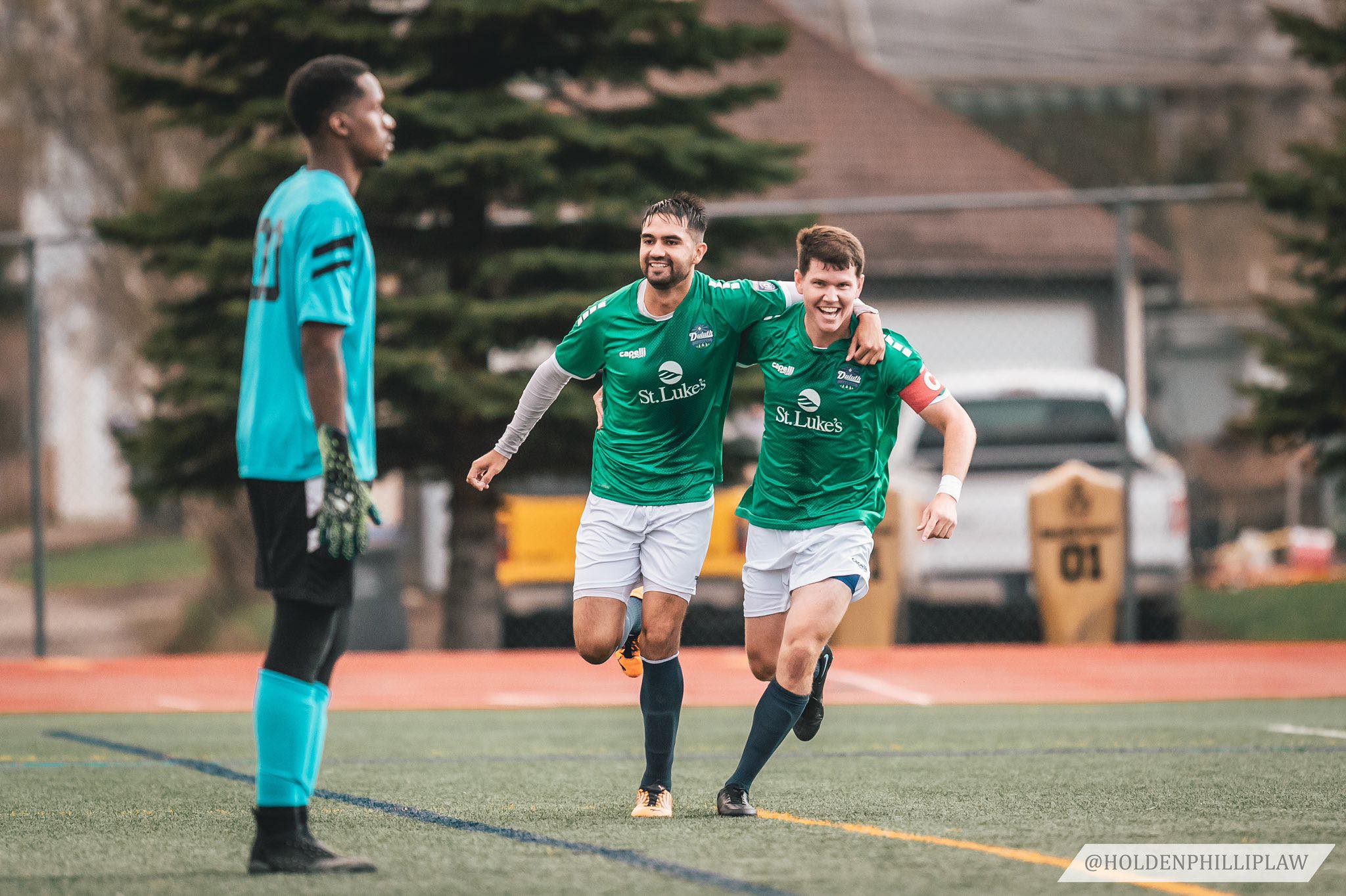 The TwinStars traveled to Duluth midweek on Wednesday for the only match of the day, having lost their opener against Minneapolis City before beating La Crosse Aris. For their hosts, Duluth FC, it would be a chance to extend a near-perfect run that’s seen the side score eight goals in two games while conceding none, including a win over historic rivals and three time NPSL North champions Minneapolis City.

While Wednesday’s match against the TwinStars proved more difficult than usual for Duluth FC, with the hosts failing to score in the first 20 minutes of a match for the first time this season, the BlueGreens did eventually find their feet. It would start with a well finished Blake Perry shot from a distance which slipped past the keeper and into the near corner. The UWS star was making his third straight start, continuing to make the most out of a season some expected to see limited minutes from. Perry’s first would be assisted by the scorer of the second just eleven minutes later, as Sam Thornton rifled a well taken shot into the top left corner of the net to make it 2-0 thirty-five minutes in.

Despite the slow start to the action, Duluth would continue to find the goals once the water was flowing, Perry would jump on to a deflected ball to score his 4th of the season before Santiago Erazo launched his first goal of the season into the net to make it 4-0 before half time.

It’s a complimentary moment for a player who may well be one of the best performing in the league, providing a strong core to Duluth’s defense across three wins. The TwinStars’ pain was made worse when team captain Karim Peterson-Darbaki received a red card via two yellow cards for a shove off the ball.

The visitors would perform far better in the second, beneifiting from the influences of substitutes like Duluth FC veteran Ivan Adika. After conceding almost a goal every ten minutes in the first half, the TwinStars would manage to go 45 minutes without in the second. It should be noted that were it for a dull edge on some big chances, the likes of Aaron Pike and Blake Perry could well have changed that. If anything negative can be said of Duluth’s performance on the night, it is perhaps that they could’ve done more to strike while the iron was hot.

Duluth, however, would get their final blow as Peter Oyetunji scored a hard fought goal, having worked endlessly for a successful strike since kick off that evening. A promising afternoon would end in a 5-0 loss for the ten men TwinStars, a tough blow after last week’s promising win. Duluth have now blown away the entire Twin Cities portion of the NPSL North, all three being seen as some of the league’s most difficult opposition.

For all the attention on Duluth’s front line this season, with thirteen goals in three matches, it is perhaps the defense that has been the most impressive, conceding goals along the way. Duluth continued that form tonight despite some major changes. These included Micheal Garrihy starting in goal and Jake Starling stepping in for Martin Gryzwa.

Designated captain Starling, who made his first start of the season on the day, says that the team’s uptick in form comes down to the quality of the coaching staff and their aim to create a unique group of players with self-belief. 2022 is Starling’s third season with Duluth FC.

“Give credit to Sean and Craig and their staff, they always recruit good players, but I think we just have the belief in ourselves to play the way we wanna play. I think, you know with the Minneapolis game, every year they kind of come to us, we defend for ninety minutes, and this year we’re putting pressure on people. We’re scoring goals, and we’re just being ruthless… And you know it’s just helping us get the results.”

Starling’s three, not including the would-be season of 2020, years with Duluth FC are a rarity for many clubs in the NPSL, but the Florida-born defender explains that the decision to come back was easy after his experiences in 2019 and 2021.

“Once again I give credit to Sean and you know, this place, the fans. Sean doesn’t just recruit good soccer players, he recruits good guys overall, so you know everything when it comes to teammates is great, we always bond great. And the fans, every year we seem to have more fans. I give credit to Holden and Harry [Law], they make everything feel professional… Every year the team is good, you know you’re coming here to compete and part of being an athlete is you wanna win and these guys expect you to win.”

The defender also noted that while the club’s goals this season are set to be paced with the progression of the season, avoiding celebrating before there’s anything to celebrate, there is a clear desire to get silverware this season and take the club as far as it can go.

“Sean told us from day one that our goal was to win [the conference] and go to nationals and you know, he set the standard high from the start. He recruited us to do that, and all the guys believe it.”

While the Fusion have had an on and off start to their new look season, it was perhaps Med City who had the most weight on their shoulders this weekend. With Duluth going three for three, Med City need results to keep the pace and limit the gap to two points.

Med City would prove the side which came most prepared as they secured a thirteenth minute goal from Scott Neil and a thirty-second minute goal from Matthew Roberts. Up 2-0 at half time, Med City seemed secure in the lead.

The Fusion, however, would put up much more of a fight in the second half, with their only realy fault being that they found their first goal too late and could only climb back up to 2-1. Med City get their second win of the season and stay well within reach of Duluth, who they’ve to play this season.

Having found their feet against the Fusion the week before, Joy hosted Aris at the perfect time to make it two wins from two after their surprise heavy loss to Duluth in week one. With a brand of creative, high possession ball, Joy have shown a talent for getting bigs wins against the typical lower half of the table.

This match would prove the most surprising of the night, with La Crosse Aris securing their first win of the season in 3-0 fashion over Joy Athletic. It’s also Aris’ first NPSL North win since 2019, having gone winless in 2021.

It’s a damning night for Joy’s already criticized defense, but the sort of result that often is waiting in the grass for someone each season. That said, Aris have been considered an improved side this year and this sets up their home game against Sioux Falls next round and their trip to Duluth after that as interesting matches.

Off the pace for the north title, Minneapolis city traveled to a strong-starting Sioux Falls Thunder in hopes of a road win to rekindle their campaign. The Thunder, for their part, had shown grit in weeks one and two, enough to trouble the holes of the reigning champions.

It would prove a match of two halves, or rather one hour and one half an hour. Sioux Falls went into halftime up 1-0, a lead extended early in the second half to make it 2-0 thanks to scorers Marcus Horwood and James Bolger. City would respond with a late goal to make it 2-1, before a penalty was called for the 85th minute. Sioux Falls Thunder goalkeeper Foltz would step up, however, and save the attempt to keep it 2-1.

Hold your horses though, because frequent super-sub Loïc Mesanvi would score a last minute banger of an equalizer to make it 2-2, giving City something to take home for their efforts and leaving them with one win, one draw, and one loss this season.