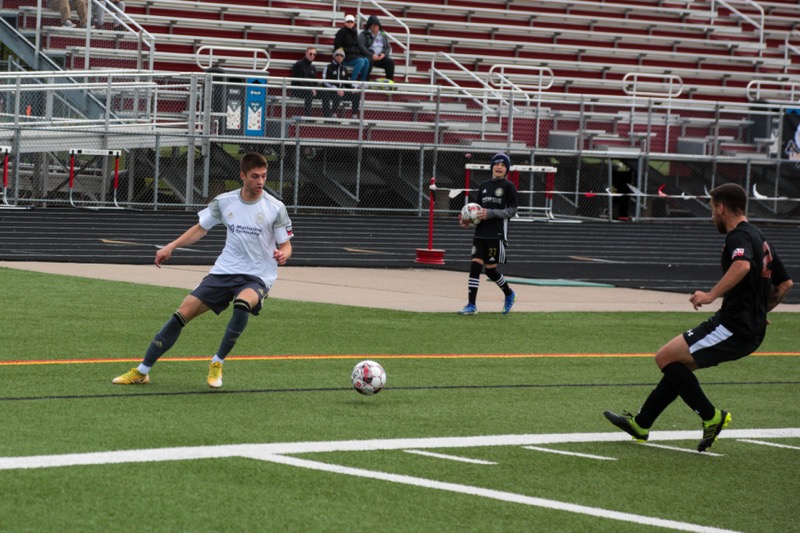 It was a beautiful Sunday afternoon to watch St. Croix Legends home opener at Stillwater Area High School. My first challenge would be an unexpected question lobbed through press box window. “Do you know which color the Legends are?” a young girl asked. I replied, “White, Peoria City are in black,” and she quickly relayed the info to her friends. Little did I know then, “youth vs. experience” would become a theme for this article.

St. Croix’s challenge would be Peoria City, who had proven they can win away as they beat Minneapolis City 1-0 at Breck High School on Friday. Although both Legends and City are new in USL League Two this year, Legends is definitely younger while Peoria CIty has more experience. Who would win this battle in the Deep North division?

1st half: Seniors test the Freshmen

Peoria City got off to quick attack. In the 12′ they hit the crossbar twice: once on a great dribble and shot, the other more on an errant cross from the right side. In the 14′ Peoria forward Justin Freitas missed high on a nice dribble from the left.

In the 23′ Peoria MF Gustavo Rodriguez dribbled by a couple of Legends and slipped a through ball to CF Kevin Hernandez. Hernandez’ shot went wide, and he was visibly frustrated on squandering the perfect pass.

St. Croix Legends came back with a threatening possession of their own. In the 25′ Legends hit a long ball to MF Spencer Enright (Augsburg U.) sprinting down the right sideline. Enright turns the corner near the endline and puts a great backward diagonal ball into the box. Peoria’s German captain Nil Buchwalder reads the play and steps to clear before Legends LW Telvin Vah can make a play. Vah would get on a header soon after but it was an easy save for Peoria GK Kevin Qi.

Towards the end of the half, Peoria MF Rodriguez attacks down the right with a nice pass to W Justin Freitas. Legends MF Nicholas Zuchkowski cycles behind to cover for his fullback nicely and dispossesses Freitas cleanly. Peoria definitely controlled possession more, but after exciting chances for both teams, the first half ends 0-0.

During halftime, I had a chance to speak with St. Croix Executive Director Nathan Klonecki. He understands this first year will be a learning year, not just for the players, but also for the front office. Despite losing in their first game to the Des Moines Menace 6-2, he and his staff learned a lot about how Des Moines operates their club and manages a home gameday.

One of Klonecki’s goals is building a soccer community around Stillwater. In addition to their youth soccer programs, Klonecki mentioned their U13-U19 boys joined the Elite Clubs National League (ECNL) this year. Klonecki also stated with pride that all their youth players get into Legends (USL League Two) home games for free. You can read more about Nathan Klonecki in this article by Sota Soccer’s Jeremy Rushing.

Early 2nd Half: The Kids Are Alright

While the second half started slowly like the first. Legends progressed the ball forward better than the first half. In the 57′, Legends took a corner kick from the right side. CB Otis Anderson was on the left side inching his way toward the goal. Anderson would get pulled down in the box. The center referee immediately pointed to the spot, upgrading the corner kick to a penalty kick. Legends RW Victor Gaulmin kick down the middle as GK Qi dove to his left. In the 59′ the home side was up 1-0.

In the 64′ Peoria City’s Marco Valero Perez took a corner kick. He sent a well-placed inswinger that took a dangerous bounce in the six-yard box. Legends GK Wesley Sanders patiently tracked the bouncing ball and made the save look easy in a situation other young keepers might panic.

Later 2nd Half: The Switch

Peoria would keep up the attacking pressure with Rodriguez sending in a dangerous cross. Legends CB Jared Hecht headed the ball out to his left, where João Brum collects it and attempts a Tae Kwon Do roundhouse volley that went wide in the 71′. Two minutes later, João Brum sent in a cross from from the right corner. After an awkward bounce, Freitas volleys it inside the far post to tie the game 1-1.

In the 82′ Peoria took a shot from the top of the box that missed high and then a charging header of a corner kick just went high.

In the 84′, a Legends defender attempted to clear a dangerous ball. The moonball drifted in the air rightward across to the weakside where João Brum kicks a hard shot out of the air back inside the left post. After an assist and several misses, he finally gets a goal of his own.

Although Legends had a dangerous throw-in in stoppage time, Kevin Qi gobbled up the ball like Sunday turkey dinner. The visitors hold on: Peoria City win 2-1.

I had the chance to talk with Legends head coach Casey Holm, who has been with St. Croix Soccer Club for many years and also coaches at UW-Eau Claire.

On the second half adjustments and looking ahead:

“Guys definitely followed the direction. They did things we were asked — just when, you know, Peoria scored, that maturity , that composure on the ball and everything, definitely changed the game a little bit. We’ll will get to training, make some adjustments and try to ramp up their level of fitness and things like that.”

On CB Jared Hecht’s many clearances:

“I mean, he’s a manchild. He’s a beast. Watch out; beware, don’t go through him. But yeah, I mean at the end, I had to put it on top tried to manufacture a goal out of it.”

When I spoke with Peoria City head coach Ruben Resendes, I asked what he told his players after Legends scored the penalty to go up 1-0. He replied,

On captain Nils Buchwalder holding down the 3-4-3:

“All of our defenders were great. We switch things up today. Against Minneapolis, we played with four in the back, and today we went to three in the back. And these guys have a lot of experience, and most teams can’t change like that within, you know, a 48 hour period and play really well and win a game. And these guys can because of their experience.”

Certainly, experience won out over youth today. The MN away trip for Peoria City earns them 6 points and pushes them to the top of Deep North table, albeit with Des Moines having played one fewer game. This Friday, May 27, Des Moines Menace host Peoria City while St. Croix Legends will make the short drive to Blake High School away at Minneapolis City SC. These four teams sit atop the Deep North. Who will end up on top? Stay tuned.