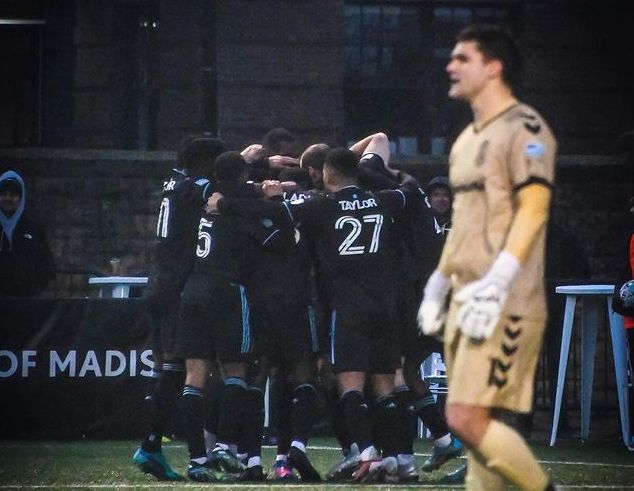 I love the U.S. Open Cup. Always have, always will.

I recognize that not everyone shares this love, a statement I’m basing on the “there are DOZENS of us. DOZENS!”-level crowd that showed up for the Loons’ win over Colorado in the previous USOC round. (I also recognize that killstorms, followed by a 1pm resumption the following day, had something to do with the attendance.)

For me, though, this love goes back to years and years ago, in the days before MLS even hinted at a Minnesota franchise. The Thunder existed, but after 2004 or 2005 or so, it was not exactly a successful existence. Most years they failed to make the playoffs against whatever collection of squads happened to make up the USL First Division; every couple of years they got a new owner, the last of which ran the franchise into the ground and skipped town.

On a national level, it was not at all clear that MLS was going to survive into a second decade. The 2002 World Cup helped stabilize a league that had nearly folded at the beginning of the year, but the green shoots of growth hadn’t exactly taken root yet. San Jose moved to Houston. The expansion teams were the misbegotten Chivas USA and Real Salt Lake; I cannot explain to you the shame of trying to be an American soccer fan in 2005, having to answer to non-soccer fans for a team in Utah that was cribbing its name from Spanish soccer.

I tell you this, because it made the Minnesota Thunder feel almost impossibly far from the big leagues. MLS wasn’t a big league in almost anybody’s eyes, and Minnesota wasn’t anywhere near MLS; the A-League / USL First Division felt like it was about on par with town-team baseball, in terms of how seriously it was taken by the media, or your not-on-soccer-forums friends.

But once a year, if they were lucky and if they made it through a couple of rounds, the Thunder would have a shot at being big-time for a day – or two or three or even more. And that came through the US Open Cup.

It happened a couple of times, most famously in 2005, when Minnesota beat Real Salt Lake, Colorado, and Kansas City on the way to the semifinals. The Thunder beat the famous Los Angeles Galaxy in 2004; in 2009, they took Kansas City all the way to a penalty shootout. In 2010 they sold a home game to RSL, then beat them 3-1 away, the “Take The Money And Run” game. In 2015 they again took Kansas City to extra time at home.

Now, of course, this is all quaint and historic. MLS is fine. Minnesota is in the big leagues. But I still get excited every time the Open Cup comes around again. And heck, this might be the Loons’ best chance to win some silverware and play in the CONCACAF Champions League.

Get that serious face on

With 16 teams left in the competition, we’re down to just three from the lower divisions – two from the USL Championship, and Union Omaha, the sole third-division squad left.

We haven’t had much for cupsets this year, but Omaha provided one of the better ones, taking the Chicago Fire to extra time, scoring late in the extra session to level the scores again, and then downing the Fire in a penalty shootout.

It’s fair to say that the Fire didn’t exactly take the game seriously, but they’re also the Chicago Fire, which is another limiting factor.

Adrian Heath has spoken a number of times already about approaching this game with a proper mindset, so he’s certainly aware of the dangers that the Owls will pose. This is a team that could have won the league in 2020, and did win the league in 2021, and has already beaten one MLS team; it seems unlikely that they’d be overawed.

That said, the MLS Loons have a pretty good record against lower-division teams in the U.S. Open Cup. They beat Forward Madison earlier this year, they hammered New Mexico United in 2019, and they squeaked past then-USL FC Cincinnati on penalties in 2018, so they’ve yet to have a Cup letdown under Heath.

We’ll have to see what “taking it seriously” looks like for Minnesota. Third-string keeper Eric Dick will start, as Dayne St. Clair rests and Tyler Miller works back from an abdominal injury suffered in warmups on Sunday. Abu Danladi, who started the team’s previous two USOC games at striker, is out with a thigh injury. Niko Hansen, who started against Forward Madison, is questionable. Brent Kallman, who was sent off against Colorado, is suspended.

On the flip side, both Michael Boxall and Kervin Arriaga are suspended for Sunday’s MLS game, and that means both will play tonight, according to the Star Tribune’s Jerry Zgoda.

What’s the deal with Union Omaha?

As mentioned, Omaha is the defending third-division champ. That said, their 2022 squad is a lot different than their title-winning group. The team sold Damiá Viader, the league Defender of the Year, to Sacramento Republic. They also lost their three other leading scorers from last season, all to the second division.

You may recognize Conor Doyle from the Omaha squad, especially if you happen to be a die-hard Derby County fan or a longtime MLS sicko. Doyle played three years for Derby in the Championship, then three more for DC United from 2013-2015, before beginning a lower-division journey that’s taken him to Puerto Rico, Jacksonville, Chattanooga, and now to Omaha.

Also back from last season’s champs is goalkeeper Rashid Nuhu, who won the Golden Glove last season. Nuhu was one of the stars of the team’s third-round win over Chicago.

Union Omaha has a win and three draws in five games in the USL this year, leaving them in ninth in League One. They haven’t played since May 14, a 1-1 draw with the Richmond Kickers.

These two teams have never played, which is not surprising because the U.S. Open Cup was canceled in both of the years that Union Omaha has existed.

As for the previous round, Omaha put together a straightforward win against fellow League One side Northern Colorado. Minnesota, meanwhile, won one of the strangest games in the club’s existence, a game suspended due to inclement weather after 21 minutes and not resumed until the following day, a day when the other team’s coach was openly accusing U.S. Soccer of carelessness in not rescheduling the whole thing.

4 – Number of teams still in this season’s U.S. Open Cup that also made the quarterfinals in 2019 (the others are Orlando City, NYCFC, and LAFC.)

153 – All-time U.S. Open Cup matches between Minnesota and Kansas City (editor, please fact-check this number). If Minnesota and Sporting KC both win their Round of 16 matches, they’ll meet again in the quarterfinals.

I don’t want to be arrogant! As I mentioned, I remember what it’s like to be on the other side of a match like this, with an MLS team against a lower-division team, which – as I said – made me love the U.S. Open Cup. With this in mind, I’ll predict that Union Omaha wins 6-4 in extra time, harkening back to those halcyon 2005 days.