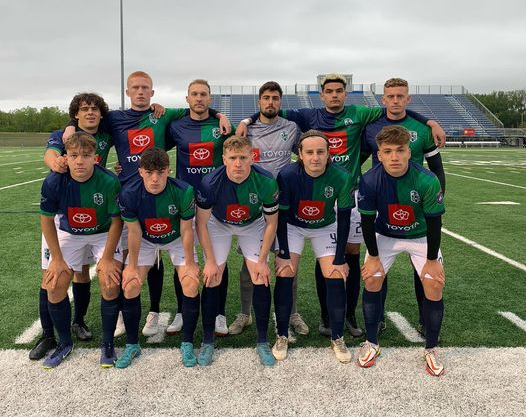 Any match between Med City and Minneapolis City is set to be an eventful one, with both clubs making up two thirds of the NPSL North’s historic big three. This season’s first meeting had all the more depth, with Med City standing as one of two clubs leading the table in 2022, while Minneapolis have had a difficult 1-1-1 start. A win for either would have major implications for both seasons.

The night’s matchup would prove an eventful one, with young star Loïc Mesanvi opening the scoring, with his usual mixture of pace and calmness on the ball, early to give Minneapolis a vital road lead. It wouldn’t last, however, as Med City charged back into the match, first with an own goal following a set piece, then with a Scott Neil goal from open play to make it 2-1 by half time.

The visitors’ first half performance was far from lacking, with the Crows looking a good side just as they did when conceding early to Duluth earlier in the season. Defensively however, over time, they showed the same weaknesses against Med City as they showed at the BlueGreens.

Med City and Minneapolis City would both come out of half time ready to go, creating chances at both ends of the pitch in search of a lead extender or equalizer. It wouldn’t be until the final stage of the match that Dion Dozzell would score an 80th minute goal to secure Med City’s 3-1 win.

Unfortunately for the Crows, losses to both of the other expected title challengers leaves their hopes of a fourth consecutive NPSL North title seeming thin. There’s plenty of season left, of course, but even if performances against the lower half of the table improve and maintain, it’s extremely difficult to claim the trophy without getting big wins against Med City and Duluth FC.

The TwinStars and Joy, two Twin Cities sides that, while perhaps projected to do better than they have this season so far, are known for providing a competitive match more often than not. When the two sides met this week, it was sure to be a night that would heavily influence the midtable battle surrounding half of the NPSL North.

It would be the TwinStars that would emerge victorious on the night, with Sadra Golzarian scoring the opener after a mild 0-0 first half. Joy would answer through Diego Paulin just ten minutes later, but NPSL North veteran and former VSLT man Mark Boquin would find a way and give the TwinStars back their lead in the 89th minute. It would end 2-1.

It’s a far calmer result for Joy, but it’s still a third loss in four games and another sign of the club’s struggles to secure defensive composure. Meanwhile, the TwinStars do about as much as they can to make up for last week’s tough loss to Duluth, getting that second win and staying very relevant on the table.

While it seems like so much has already happened in the NPSL North, this match between the Crows and the Fusion, the host’s fifth match, was also City’s first home match in the NPSL this season. The match provided an opportunity to get a confident win in front of fans and reset some of the early season hiccups that have left them distant from the top spot.

Friday’s match would, as this very writer would find out while in attendance, not follow the script. The Fusion would open the first half in electric fashion, creating several one-on-one chances with the keeper as they played a long ball style with a bit of dynamic passing mixed in. The visiting forwards, however, failed to convert those chances with a painful run of missed passes and poor shots.

The Fusion’s chances cast aside, it would be Minneapolis City who, despite struggling at the back, created a beautiful sequence upfront which saw Cole Schwartz get on the end of a series of tight passes in the box. Schwartz gets the opening goal and at half time all looks well for Minneapolis City, 1-0.

The second half would prove a different story. Tre Bonaparte, having skied a big chance in the first half, would create space at the inside edge of the box before curling in a beautiful shot into the top right corner to make it 1-1. City would argue for a foul in the build up on and off the pitch but the referee crew stood by the call, with a straight-arm to create distance a common tactic for forwards, and the Fusion finally had their goal. It wouldn’t be their last.

The Crows had a big chance to get back into the action after a penalty was called against the Fusion, but Abbai Habte would hit his effort from the spot well over to leave it 1-1 in the 68th minute.

The Fusion would find their shock winner in the 69th minute when Kazuma Ishizuka took a shot from the edge of the box, his diagonal effort finding the far corner past goalkeeper Matacastillo’s fingertips. It would be final goal, despite a wild final 20 or so minutes of action, and the Dakota Fusion would get their first win of the season, while Minneapolis City suffered their third loss.

While the Crows are packed with talent, it’s fair to say many teams are finding ways to get through them defensively, whether it be possession or more pragmatic styles. Minneapolis City are dangerous up front, but will have to pack in the goals to make up for the chances they’re allowing the opposition. Against the Fusion, the Crows also often seemed outmatched in terms of physicality. While there are certainly differing opinions across the sport of football about the nature of physicality and contact, the NPSL North has simply always been a place where physical football is to be expected, something that played a role in City’s losses to Duluth and Med City as well.

For new Dakota Fusion Head Coach Samuel Winning, who got his first win since taking up that position on the night, it was all about making small mental adjustments at half time, as well as smart substitutions as the game went on.

“Honestly, especially for us this year, it’s been sort of an up and down road so far. We’ve been in games we should have won, and we’ve had some bad performances as well, but we finally put everything together. Some of the changes we made were just simple changes to be honest. Run of the mill stuff, work for your teammates, work harder.”

The former Duluth FC goalkeeper was beyond happy to help guide his side to a result, adding that the Fusion showed an ability to figure out their opponent that is key to success.

“We’ve done the job in the second half and, as you know, this conference sometimes isn’t pretty and I think we dealt well with what they presented with long balls and fast attackers and I’m very proud of the team just now, I guess, just to win in that way and come back from a position we’ve been in before, and, [I feel] ecstatic.”

Winning adds that getting a result at City after failing to win their first few matches is a great way for the Fusion to kickstart the rest of 2022, and that the night showed the character his side can bring.

“Honestly, it was a big one, you know what it’s like when you’re waiting for that first win and you’re like ‘it’s coming, it’s coming, it’s coming’ and [now] it’s finally came. This is going to be the springboard that sees us go to where the talent we have deserves to go. You’ve seen the games, you know how talented we are… It shows how much we’ve been growing these last couple of weeks… we’ve been in this position before, and then we tied it and we got beaten in one of em, so it’s great to do that… I’m just excited for Joy to come up to Fargo now, that’s what I’m excited for and that’s what we’ll focus on now.”

The real question ahead of this match was how Duluth, expected to rotate a few key players, would do in maintaining their high scoring, zero conceding record.

We never quite got the answer as Aris had to forfeit the match due to what Duluth FC described as “unexpected transportation issues”. Duluth are given a 3-0 win, which may well have happened, but lose out on the chance to get more time on the pitch in an impressive season.

It should be noted that as of publishing, the league’s official table has yet to show Duluth FC has received the points or that the BlueGreens have a fourth win and Aris have a third loss.

While Med City have beaten most of the NPSL North’s usua middle and lower table sides this season, they’ve yet to do so with a confident, large scoreline. With the TwinStars already starting the year off with clear losses to Minneapolis City and Duluth FC, their trip to Rochester seemed like an ideal chance for Med City to get a statement win.

Med City would get yet another gritty win in this one, via a 12th minute goal from Andres Garcia. It would be the night’s only costly strike, with the remaining eighty or so minutes consisting of mistaken chances for the home side and bright moments for the TwinStars.

The hosts continue to win their matches with close scorelines and less flashy approaches, but it’s proven enough to keep the Rochester-based club well within reach of Duluth FC as the season continues.

Concluding in South Dakota, a Thunder side proving far more competitive than expected hosted a Joy Athletic side that’s struggled far more than the expectations formed last season. Sioux Falls has always been a difficult road trip for the rest of the NPSL North, and with the Thunder grabbing results against the likes of Med City and Minneapolis City, they seemed favorites on the night.

Sioux Falls’ undefeated streak would come to an end this weekend, as Joy Athletic found the character within their young squad required to get past their loss last weekend. Joy do continue to concede goals, two on the night, but their attack was far more alive. Caputo would get the first two goals of the night, with Joy leading 2-0 at one point, with Denilson Ramos’ goal proving the decider against Tyler Limmer’s second half brace for Sioux Falls.

The win gives Joy plenty to build on as they reach six points, tying up with the neighboring TwinStars and passing the reigning champions Minneapolis City, who are on four points.