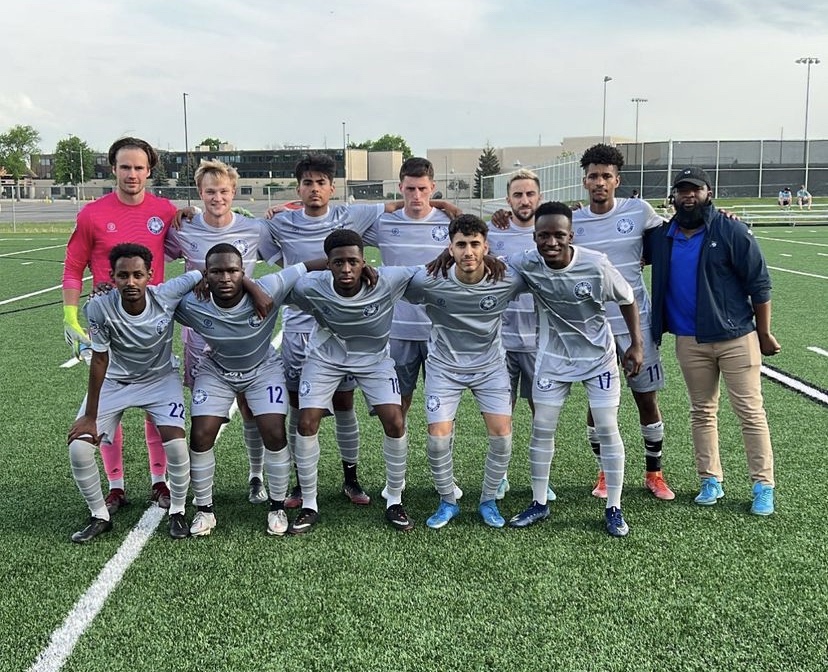 In a match with major title implications, the Crows traveled to Twin Cities neighbors Vlora in a meeting of the 2019 and 2021 division champions that could help decide who took home the title in 2022. Both sides had won every match they played, Vlora four and Minneapolis City three, while scoring at least ten goals and conceding very little. In City’s case, conceding none.

It would be Minneapolis City that opened the scoring on the big night, with Kebba Janneh finding the back of the net in the seventeenth minute. It was yet another night where the Futures forwards looked dangerous, having guided the club to eleven goals in three games.

Vlora would find their answer, however, as Uhunoma Frederick scored yet again this season to make it 1-1 in the 62nd minute. It would be the first goal City had conceded this season in the UPSL. It would end 1-1, a result neither side would have liked but one that benefits City slightly more with their home leg of the match up still to be played.

It’s important to note, however, that the season is far from decided and that this draw does all the more to extend our wait for a clear front runner between Vlora and Minneapolis City. The two sides have yet to suffer defeat and seem on track for highly competitive seasons.

FC Minneapolis hosted a Brooklyn Knights side that has proven competitive but struggled to get results in a match that could prove vital in the City Lions rediscovering a title challenge for 2022. The hosts week one loss may have dampened their momentum, but they’ve looked strong since.

FC Minneapolis would emerge victorious in this Twin Cities affair, with goals from Adrien Alexandre, Matheus Rodrigues, and an own goal to secure a 3-0 win over the Brooklyn Knights. It’s a strong scoreline and a big win for a City Lions side that has yet to determine its fate for this season.

Will FC Minneapolis compete for the UPSL Midwest-West title? Will they be able to beat the likes of Vlora or Minneapolis City, having lost to the Dakota Young Stars earlier in the year? These are questions that would be answered in part later in the week, but as of Wednesday night, the City Lions had plenty to be happy about.

Fresh off a heavy loss to FC Minneapolis, the Brooklyn Knights returned home to face one of the UPSL Midwest-West’s best, the Dakota Young Stars. For the hosts, it’s a chance to make up for poor performances with a result against a top side. For the visitors, it’s a chance to keep the dominance train rolling and stay top of the table.

The Young Stars would very much keep the train rolling as they secured a dominant 6-0 win over the Brooklyn Knights. It’s one of the club’s biggest wins yet in a year where they just can’t stop scoring. The 2022 darkhorse title contenders stay well in the fight and are truly becoming a side no one would want to play. They host Minneapolis City next, midweek, in what could be a huge match for their season.

Looking a clear contender for the title at this point, Vlora stay home another round to face Rochester FC, a club that has shown potential this season but struggled for consistency. For Vlora, it’s all about getting wins after their 1-1 draw with Minneapolis City. For Rochester, any result on the road could go a long way.

Vlora continued their march forward this weekend, grabbing a slim but well fought home win against Rochester FC with a goal from Robert Cooper securing the scoreline. Cooper was later named man of the match by Vlora.

Following their draw against Minneapolis City, this win is just another chapter in a run that more and more looks like it’s set to see Vlora at the very least come close to winning their second UPSL title.

The Crows return home to face city rivals FC Minneapolis in a must win showdown for both sides. For the Crows, a loss on the night could be a massive blow to their title campaign. For the City Lions, a win at Minneapolis City could relaunch their own title bid. Both sides have shown themselves to have electric attacks, setting up quite a showdown.

It would be the City Lions that came out strong on the night, with FC Minneapolis taking a 2-0 lead near the hour mark, having found their first goal just six minutes into the match. The club has looked dangerous up front all season and the trend continued this weekend.

City would come back into it, however, finding their first goal just four minutes after FC Minneapolis’ second as Hermanson brought life to the young Crows. A second goal would come late in the 88th minute via Matacastillo to make it 2-2 and ensure the two sides have to share the points. While City’s comeback is a credit to the players, another draw does mean that the Crows are losing ground in the title race as Vlora and the Dakota Young Stars continue to pepper sides with goals while conceding very little.

FC Minneapolis later reported that club founder and team captain Sendi Ian broke his shoulder during the match and has since received treatment. We wish Ian the best.

This weekend featured a meeting of the UPSL Midwest-West’s two new clubs, who are having entirely different seasons. One, Ebusua, has one point from six matches. The other, Austin Villa, has nine from 5 matches. Visiting a struggling Ebusua side provided a perfect opportunity for Austin Villa to get its first road win, or road point, of the season, with road performances being the one major weak point in an otherwise blockbuster first year for the club.

The night’s match up would prove to be the usual from both sides, with Austin Villa pouring on the goals against an Ebusua side that’s truly struggled defensively this season. For Austin Villa, the result also reflects a rare away win and keeps their hopes of a high finish well and alive.

Turbo, with several games in hand, traveled to Maplebrook in a vital Twin Cities face off. The visitors needed points to get their season going after a quiet start, while Maplebrook could turn their mild pool of points into a genuine climb up the table with a win on the day.

Unfortunately for Turbo, they’d have to share those points as Maplebrook managed a 1-1 draw. It’s a result that benefits the more successful Maplebrook more, but neither side would have wanted anything other than a win. Turbo will have to wait at least another week for a real injection of points in their season.