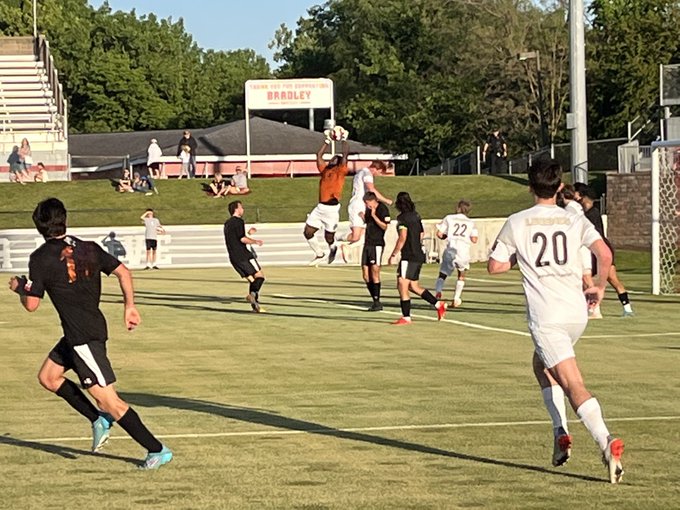 “This team, y’know, we have a great back-line and it’s one of our strong points, it’s something we take pride in, our defense.”

After last week’s hard fought 1-0 win, St. Croix Legends Defender Jared Hecht was quick to praise his teammates defensive attributes, and there wasn’t a whole ton that the Legends defense did wrong this week in their second (and final) match against Deep North Division opponents Peoria City.

St. Croix’s rock-solid defense was tested early and often in their inaugural trip to Peoria, IL.

Just two minutes in, Peoria launched a cross over to the left side, finding a streaking winger heading into the box (and possibly an early chance on goal), only to have starting right back Spencer Enright muscle the City player off the ball and clear away any chance the hosts might have had of getting off to a quick start.

Peoria spent the next five minutes relentlessly pressing the Legends midfield and defenders, putting ball after ball into the box, and generally annoying the entire St. Croix team.

It wasn’t until the 7th minute that the Legends were able to secure enough possession to make their way into the attacking third with the ball at their rather than Peoria’s. From there, it became a more back and forth affair between the two teams.

In the 11th minute City managed to get the ball into the Legends’ box, only to have their square ball sent miles clear by a stalwart St. Croix midfield.

Shortly after, in the 14th minute, starting forward Telvin Vah forced City’s first save of the game, making a beautiful turn to find the space to launch a shot that City goalkeeper Rimi Olatunji was only able to deflect behind for a corner kick.

One of Peoria’s better chances of the game was soon to follow, in the 19th minute. Forward Gevork Diarbian raced to keep an errant pass in play, carried the ball down the left side of the field, and cut inside of two St. Croix defenders before he was fouled a whisker short of the penalty box. It was left to midfielder Marco Valero Perez from there, as he surveyed the Legends’ defense and curled the ball around St. Croix’s wall, the ball seemingly destined for the bottom right corner.

But on a day when everything seemed to be clicking for St. Croix’s defense, keeper Wesley Sanders wasn’t looking to let in a goal that easily. With a diving save Sanders trapped the ball between his gloves to keep the score all tied up at 0.

This free kick was the start of another prolonged set of possession for Peoria City, who would try again and again to get around Sanders, but to no avail.

In the 23rd minute alone, the home side managed three separate chances: one winger dribbling into the box before having their pull-back pass cleared away by one of a slew of St. Croix defenders lurking in their own penalty box; a Peoria midfielder getting on the end of said clearance and blasting a shot from outside of the box only to see it smothered by Sanders; and the other winger (who must have felt left out) finding space in the box to receive a pass only to shoot into the waiting fists of Sanders, who sent the ball once again on it’s way out of the penalty area.

St. Croix would finally begin to show signs of life again in the 29th minute as Vah and midfielder Nicholas Zuchkowski combined to make their way up the field in a series of rather attractive passes between the two.

Zuchkowski’s shot was saved by Olatunji, but he was unwilling to give up. Zuchkowski ramped up the energy, winning a ball in the midfield and beginning his run up the field. He cut inside of a Peoria defender and rocketed the ball into the top right corner from 30 yards out to power the Legends to a 1-0 lead.

Against any other team, this may have been enough for the Legends to start taking control of the game, and playing it at their own pace. However, Peoria City wasn’t about to let this game go without a fight. They hit back with massive chances in the 34th and 35th minutes respectively, the first requiring a save from Sanders and a last chance goal-line clearance to stop, and the second placing two of City’s forwards mere inches from getting on the end of what could have been an equalizing goal.

Peoria City were able to find chance after chance, but at the half St. Croix still held onto their narrow lead.

There had already been a monstrous amount of excitement through the first 45 minutes, and fans didn’t have to wait long for the second half to follow suit.

Only two minutes into the 2nd half, Peoria’s press provided them with another golden opportunity. A double-team won the ball in midfield, where it was played down the left line, pulled back into the middle of the box, and fired off the crossbar, mere inches from an equalizing goal.

Spurred on by how close they had come, Peoria unleashed a flurry of shots, testing Sanders in the 64th, 65th, and 66th minutes of the game, each time meeting the brick wall that is St. Croix’s goalkeeper.

The next 15 minutes passed with very little to write home about. A shot here, a counterattack there, but nothing that had a chance to beat two keepers both playing at the top of their game.

It was a frustrating, grind-it-out affair, and to no one’s surprise, the tension on the field began to boil over.

Following a hard foul committed by Peoria defender Jordi Ramon, a small tussle broke out between a few players on the field. It was quickly broken up, but only went to show the levels of passion and drive within each of the players. City desperate for a chance to equalize and St. Croix resolved to fight against that until their dying breath.

And for the next 10 minutes it looked like they would win that fight. Peoria, who had been in control for most of the game, was unable to do anything with the ball, seemingly driving down the field at will only to harmlessly cut the ball back and lose possession.

St. Croix even had a few chances to go up 2-0, knowing that had they done so, they probably would have walked away with 3 points and been the talk of the night throughout the Deep North Division

As it was though, those chances were both left wanting just a touch more, and the talk of the night belonged to Rimi Olatunji.

In the 96th minute, Peoria City won a free kick in the attacking third. Everyone, including the keeper was up the field, desperate to save a point and defend their home. The ball was played in, finding a St. Croix defender who managed to clear the ball only to the top of the box. Only to Peoria City goalkeeper Rimi Olatunji.

But he did. And in doing so, he changed the narrative.

The Legends played a game that would make any of their fans proud. They have continued to grow week in and week out, forming a stalwart defense that any team in the league would be delighted to have.

For 95 minutes tonight they showed that what they have accomplished this season has been no fluke. For 95 minutes they said no thank you to every cross, pull-back, and shot that Peoria City could get their boots on. For 95 minutes, they looked like a team destined to win.

St. Croix is just starting to hit their stride, and with two-thirds of the season still to be played, the rest of the division better be prepared.