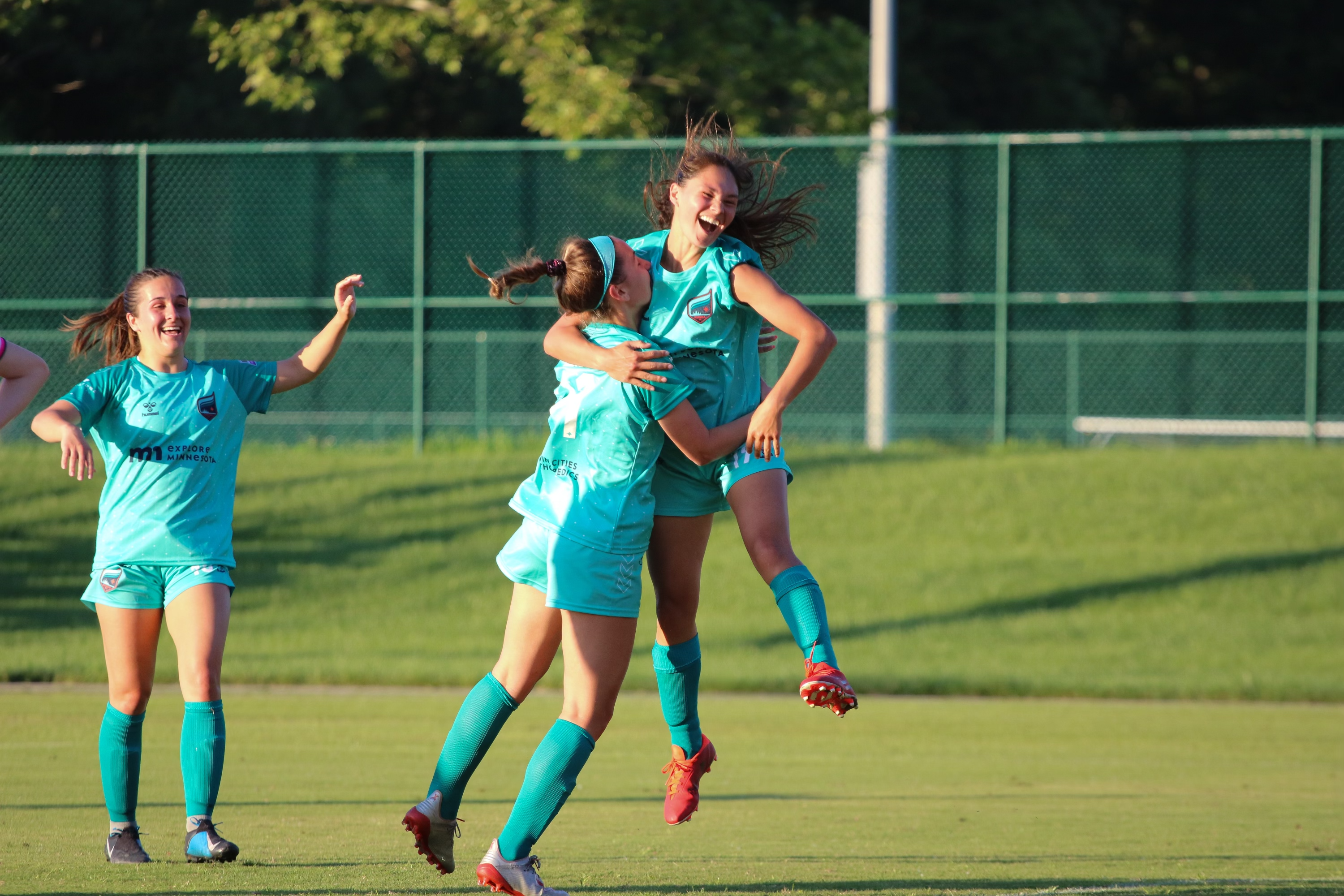 A sunny 75-degree Thursday made for a beautiful soccer evening in Kansas City, MO. Kaw Valley FC also play home games in Lawrence and Topeka, but Swope Soccer Village is where they would first meet Minnesota Aurora FC. If Swope Soccer Village sounds familiar it is the home of the formerly-known-as Swope Park Rangers, now Sporting Kansas City II.

This was the second USL W League match for both clubs. The Cranes won their home opener at Rock Chalk Park 3-1 against the St. Louis Lions, but were rained out last of Wednesday’s match in St. Louis. Minnesota drew 1-1 at their home opener versus Green Bay Glory last Thursday.

Aurora head coach Nicole Lukic stuck with the 4-2-3-1 but made three changes to her starting lineup from last week, with Elizabeth Rapp at left fullback and Jelena Zbiljic at right wing making their debuts. A substitute in the opener, Mariah Nguyen earned her first start at left wing, sliding Maya Hansen to center forward.

In goal for Kaw Valley was Anna Mayer, who incidentally grew up in Duluth, MN.

In the 6′, Rapp makes an attacking dribble and is tripped up from behind. Sangmin Cha takes the free kick from 30 yards out. The ball clears the wall, but Cranes’ GK Mayer reaches overhead to make the save.

In the 13′ Rapp dribbled outside, pivoted inside to turn a defender and passed the ball through to an onside Nguyen, whose shallow-angle shot was blocked but Nguyen headed the rebound down into the box. From the replay, it looked like Maya Hansen got the one-touch shot that rattled the underside of the crossbar but bounced out: no goal.

Kaw Valley LFB Katelyn Brinkman had to deal with Nguyen’s attacks all night. In the 18′ Addison Symonds passed left, up to Nguyen. Brinkman did well to catch up, but pulled her jersey from behind to earn a yellow card. Symonds took the 40-yard free kick, and the dangerous ball just skipped by Nguyen, unable to make contact.

In the 32′ Symonds pounced on a loose ball and passed back to Kaufusi, who immediately hit Rapp on the left. Rapp dribbled up the left sideline with pace and passed outside to Nguyen. Nguyen diagonaled the ball back to Hansen, who layed it off for Zbiljic. Zbiljic’s shot goes high, but this was the most aesthetically pleasing short-pass 1-to-2 touch sequence of the evening.

Eight minutes later Zbiljic would not miss. Kafausi sent in a long ball to Nguyen, who threaded a pass through two defenders and the keeper to Zbiljic, who buried the point-blank opportunity. The whole sequence was topologically similar to the Zimmerman-Pulisic-Aaronson goal from the USMNT Wednesday.

The first half ended MN Aurora FC 1, Kaw Valley FC 0. With new starters Rapp and Nguyen so effective to the left, Coach Lukic should ask if they are “Irreplaceable.”

“And I don’t want no substitute. Baby, I swear it’s déjà vu.”

At the start of the second half, Valley made two substitutes: RW Olivia Platt replaced Kate Gibson and MF Sydney Watts came in for Shae Turner. MN Aurora – like the Lichtenstein navy – makes no subs.

In the 54′ Aurora progressed the ball with short passes, but Kaw Valley’s Brinkman deflected Nguyen’s pass attempt to Zbiljic. Center back Baich cleared the ball out the sideline. Rapp quickly threw in the ball down the left side to Hansen, who turned and split two defenders. Hansen slid the ball over to a down-the-pitch rolling Morgan Stone, who finished.

The whole sequence was reminiscent of Aurora’s first goal: attack down the left, pass right, score weak-side. The Cranes were caught in a matrix of ball watching: déjà vu, déjà vu.

After more substitutions, Kaw Valley got more attacking chances off corner kicks and throw-ins. In the 77′ Brinkman made an aggressive throw to the 18-yard box to Raena Childers. The ball bounced over Childers head. Kaufusi attemped to clear the ball, but headed the ball middle. Adah Anderson stepped to intercept but then shot high.

In the 92′ CM Caroline Coleman, who played great going both directions, fed Childers on the right who somehow got a diagonal ball through, and sub Sydney Watts sends a hard shot high. To MN Aurora’s credit, both Childers and Watts did not have much time as they were bodied hard by Aurora defenders.

After MN Aurora’s starting lineup was announced, about 2-4 fans or travelling staff cheered. However, what Minnesota lacked in supporter numbers, they more than made up with other numbers tonight. Aurora dominated possession, shots, crosses, etc — everything except saves. Kaw Valley’s goalkeeper Maya Hansen had 11 saves and many other catches of crosses or deflections of dangerous passes. Her backline helped her out as well, including a Brinkman goal line clearance.

Throughout the game, MN Aurora’s high press in the Cranes’ half of the pitch would force turnovers and create attacking chances. GK Sarah Fuller did not need to make many saves, as the two center backs and two center midfielders usually clogged up the Cranes attacking flow.

The Aurora attack looked much improved from week 1, with more teammates closer to ball dribbler. Hansen likes to make American aggressive cuts toward the net and away from the ball, while Cha likes to make Korean short passes and expects cuts toward her when she has the ball. If these two can find chemistry with more time on the pitch together, watch out, Heartland Division.

Aurora have a quick turnaround, or turn eastward, as they travel to St. Louis Lions 2:00 PM this Sunday. Currently, Aurora and Glory are tied at the top of the table with 4 points, the former edging out first place on goal differential.