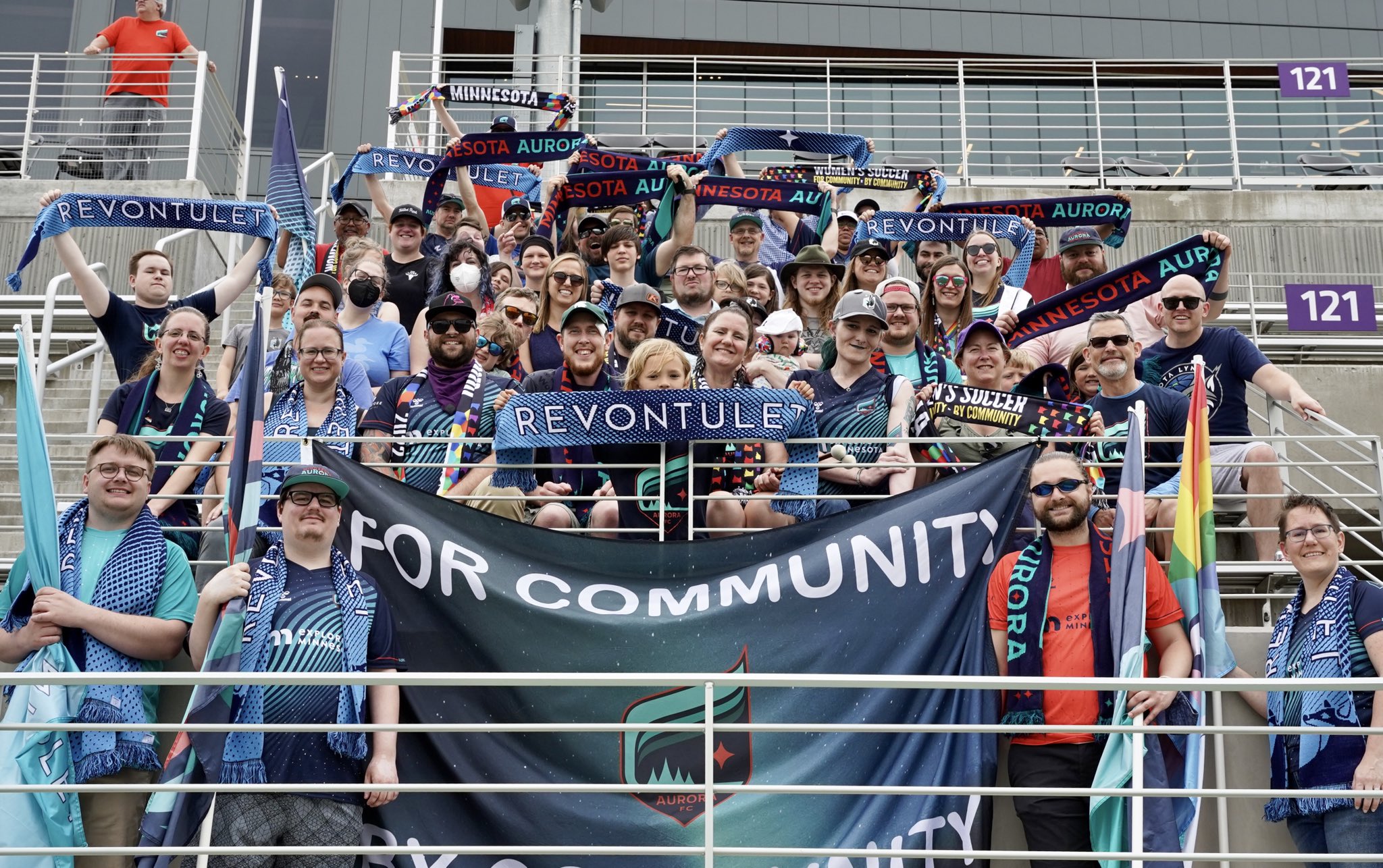 Coach Nicole Lukic kept Aurora in the 4-2-3-1, the third consecutive game with the front MN trio: LW Mariah Nguyen (Andover), F Maya Hansen (Savage), and RW Jelena Zbiljic (Excelsior). Minnesota set the pace early. Within five minutes, Aurora had taken three shots. Symonds, Langdok, and Nguyen all missed, but they had that look in their eye.

Coach Chad Sweica put Chicago City in a 3-4-1-2. This gave City a robust midfield with multiple passing lanes. However, the back three would be tested early, with Aurora fullbacks joining the press.

Around the 22′, due to Langdok’s press, CB Rachel Preston could step to an attacker and clear the ball to Zbiljic (z’BEE-litch). Zbiljic squared to Symonds, who hit Langdok sneaking behind two defenders. Langdok scored her second goal of the season.

One minute later, a Langdok throw-in propelled a plethora of prudent on-the-pitch passes. Hansen dribbled out of the corner and centered to Zbiljic, who passed to Symonds. From 28 yards Symonds struck a low hard shot while Cha performed a leapfrog dummy to confuse the goalkeeper. In total Aurora linked 8 passes together to score, and “Faster Than the Speed of Night,” Aurora are up 2-0.

64′ Aurora sub Jill Bennett dashed down the right and crossed the ball. City defender Freya Glen impressively booted it out of the air. Since Glen was facing her net, she could not see Cha, cha-charging behind her. The ball ricocheted off of Cha, possibly her left arm, and into the net. USL W does not have VAR. Chicago players protested, but “It’s a Jungle Out There.” Rule on the field stands: Aurora up 3-0.

Turn around, bright eyes / Every now and then I fall apart

Coach Chad Swieca made some substitutions, and City players passed with better vision and anticipation. At the 66′ Chicago City’s subs combined with Nugent and Cassidy for an aesthetic attack. Elisa Aguilar, Alexandra Charnas, Mya Nugent, and Peyton Williams linked passes together. Then Cassidy played a through ball to LW Megan Nemec who hit the outside upper left corner. GK Fuller’s mitt was near, but the frame made the save. Were MN Aurora falling apart?

Less than a minute later, City’s Olivia Knab took a free kick from the left sideline about 25 yards out. Knab connected with Loyola teammate Amanda Cassidy, who ran across the 6-yard box. Cassidy deflected the ball out of the air for her third goal in four games.

To Chicago’s credit, they did not give up and pressed for a second goal. They earned corner kicks and made invasive passes, but MN Aurora absorbed the pressure. The game ended 3-1 Aurora.

Friday Quotes – And we’ll only be making it right

On second half adjustments:
“I want to say in the second half, we settled in. I think we really settled down and started to look a lot better as a team and kind of started to connect.” Montgomery added, “Yeah, we made the decision to go into a 4-3-3, and I think starting in that, that could have been a different game for us.”

First home win: how do you feel?
“This is amazing! We had such a great crowd tonight, and I got chills when the fans were all chanting ‘Aurora!’ It’s everything we could have hoped for.”

On Aurora’s dominant midfield:
“Yeah, I think as games have gone on, we’ve gotten really comfortable with each other and gotten used to our movements and interchanging and just covering for each other.”

Was the “fullback attack” opponent specific?
“We like them being involved in the attack and taking more calculated risk. The style that Chicago was playing in the first half, with three in the back, allowed us to do that more. There [were] more wide spaces. So that’s why I think you saw it a lot more in the first half. In second half they kind of, to their credit, fixed that a little bit. But yeah, we want to continue to get our outside backs involved as much as we can.”

In a quick turn around, both teams arrived back at TCO Stadium Sunday for an early 12 PM game. Thankfully, coffee was in the press box because I woke up at 4:30 AM for some reason.

Chicago City started in their 4-3-3 and made a few changes to their starting line up. Costadena Liapis started in net. Coach Swieca rewarded Megan Nemec’s solid performance from Friday to start at forward alongside Foster Ignofo. This freed Friday “second striker” Amanda Cassidy to drop behind them, more of 4-3-1-2.

Chicago made another key change: to press aggressively from the start. The first 12 minutes Chicago won the ball back and got more attacking chances than Aurora. 7′ Chicago pressed Kaufusi was hard; the center back passed too lightly back. That allowed forward Ignofo to run onto the ball. Fuller was forced out to the edge of the 18-yard box to clear.

We’re living in a powder keg and giving off sparks

Adapting to this new press, Aurora started to move the ball more quickly. During one such sequence, Eli Rapp was taken down hard by Ignofo. In the 25′ Kaufusi launched a long free kick from the left. The sphere pinballed off a Chicago head and Minnesota foot to land at Cha’s feet. Liapis made the first save, but the ball bumper-bounced back to Cha’s flipper. Cha put back her own rebound for the first goal of the game and her second of the weekend. Several teammates joined Cha in a Cha-cha-cha celebration dance.

Every now and then I get a little bit angry

Contrast to yellow cards, mere moments later the players tested the referee’s other boundary: allowable physical play. Aurora substitute Hansen was shouldered off the ball. In the 60′ Amanda Cassidy got bumped off the ball. Both players protested the non-calls, but in both cases the referee permitted the defense to get Physical — not a Bonnie Tyler song.

‘Cause we’ll never be wrong

In the 75′ Kaufusi poked the ball from Nemec and long-passed down the left to Hansen. Hansen pivoted middle and left both defenders in the dust to score her second goal of the season.

83′ Aurora subbed in GK Taylor Kane for Fuller. Later, Maya Hansen won a 50-50 ball on hustle, dribbled middle and shot. Galo made a great block, but the ball fell to Aurora’s Lydia Rupert. She passed forward to Arianna Del Moral, who made the extra lateral to Shelby Hopeau (HO-pay-ow) for the finish. Minnesota Aurora beat Chicago City again, this time 4-0.

Minnesota Aurora’s defense was dominant, not conceding a late goal as in other games. However, as Equal Time Soccer’s Mark Privratsky said, “This is the most difficult team [Aurora] have played since Green Bay.” Chicago City created chances and were threatening in both games, but by Sunday Minnesota adapted to Chicago’s various attacks and dominated most of game.

Total Eclipse . . . from the start

Her journey from Minnesota to Chicago:
“Well, I grew up in Maple Grove, Minnesota and played soccer for MTA [Minnesota Thunder Academy, WPSL] all my high school years. And then I now play at Loyola University Chicago…. I’m going into my senior year, so I’ve been there for three years now. And this summer I decided to join the USL team for Chicago City.”

Journey from a second forward to more central:
“I actually usually play in a 4-3-3. I usually play like an attacking mid or an outside wing. So we were playing a 3-5-2 when we started on Friday. [But] I was upfront — so, it didn’t work too well. And then when we moved to a 4-3-3, I love that position because I love distributing the ball and finding those outside forwards and our top forward.”

City’s new pressure on Sunday:
“So it was a little bit different. They pressed a lot harder today than — they were pressing the center backs a lot more. But I think we just got a little frantic. But as soon as we started to settle, it got better, but it took a while for us to settle.”

Her connection with Addy Symonds and the rest of team:
“We already had that little connection. She actually played center back with me at Utah State. So we have that chemistry a ton, but like I’ve noticed our team: everyone is so nice. We felt that chemistry so quickly…. Because it is so loud in here, we really do have to have like that silent communication where it’s more of just like knowing each other. And so you could kind of tell that from the first game to … these two home games. We actually knew each other a lot better.”

The big win and the big picture:
“This is what you hope for. This is how we built our team: with big goals in mind, and we want to keep it moving. We put a lot of effort into the players that we recruited, getting them to play the way that we wanted to play. So it’s nice to see things coming together. We’ve got a long way to go yet, but we’re happy with our start. And we’re gonna stay focused on moving towards our goal of being the division champion.”

Three home games with 5000+ attendance:
“As the coaching staff, we always believed in what the board and the founders were building here at Aurora. So we had high hopes that the community will be behind it, and we have been just in awe of how much support the team has had and to have the same attendance game two and three as game one.”

Chicago City SC play Wednesday, June 15 in their home opener against St. Louis Lions. They turn around and then host Minnesota Aurora FC this Friday.

Aurora has the advantage of not playing midweek. Due to karma or scheduling, Aurora will have to turn around brightly and head home to host Kaw Valley Sunday, June 19.

MN Aurora FC are sole undefeated team in Heartland Division and 3 points clear in first place. They have 7 games to play but only 3 at home. Whether you watch the stream at home, go to the games in person, or miss the game completely, Sota Soccer has you covered.