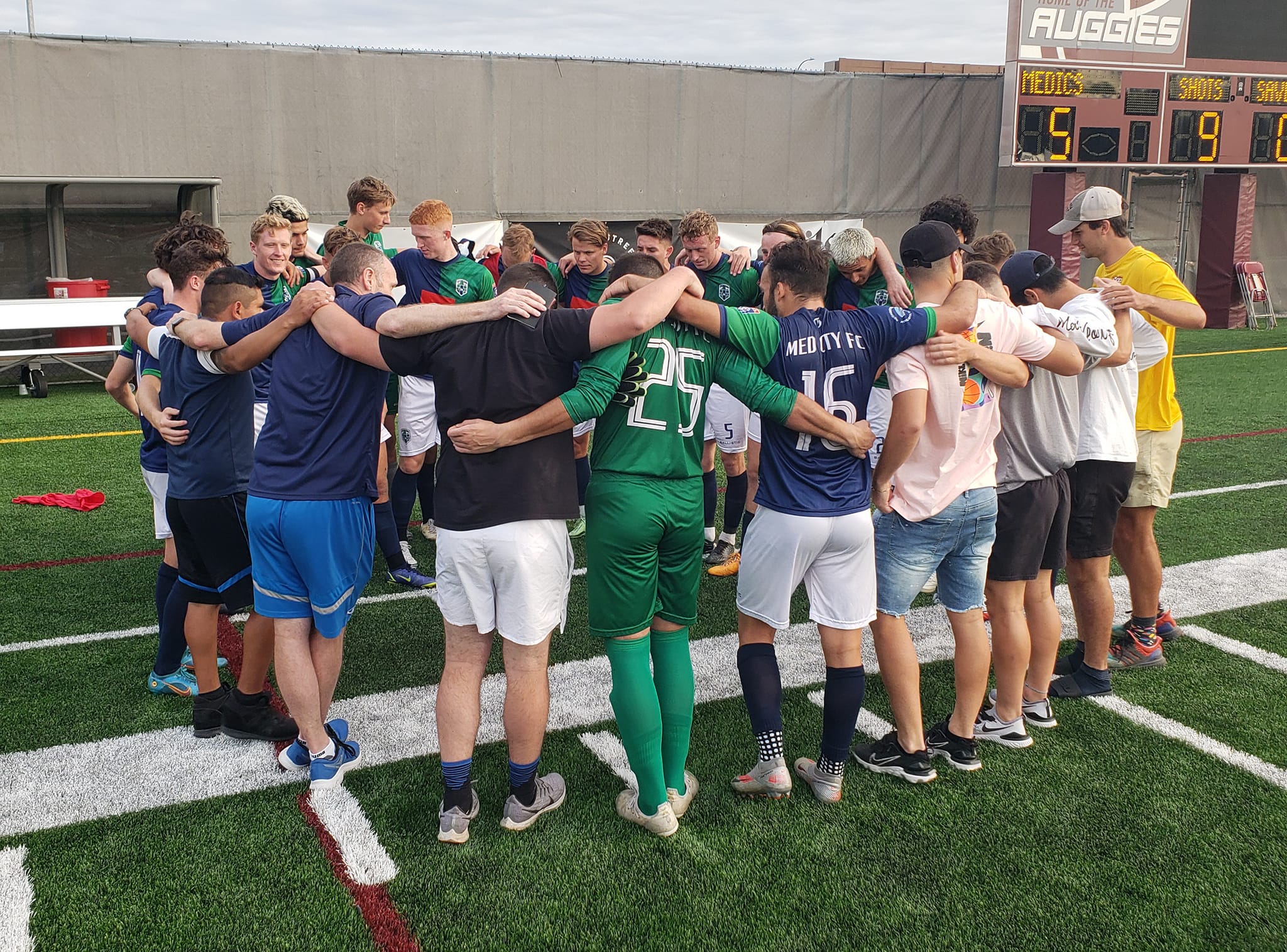 Minneapolis City’s season has come with its share of ups and downs so far, but with only half of the season gone there’s more than enough time remaining for the Crows to make 2022 a year to remember. One such opportunity arose when Med City, a side Minneapolis has battled for silverware alongside Duluth for years now, visited the Twin Cities amid a highly successful run that’s seen the Mayhem go undefeated thus far.

Med City would indeed show their quality once again on the night, after surviving a strong start by the Crows in the opening ten to fifteen minutes of the match. Not long after Charlie Adams was replaced by Tyler David due to an injury, Med City earned a penalty kick after Vang was pushed off the ball, only to track back and then foul an attacking visitor. Narcis Bou stepped up and panenka’ed the effort to make it 1-0 in the 26th minute. A well placed pass would find Scott Neil on the back post soon after to make it 2-0.

It’s worth noting just how much turnover Minneapolis City has had to do on the pitch. Not just because of their multi-league set up, but because of a vast range of injuries the roster has faced. According to numbers provided to Sota Soccer by the club, Minneapolis City had had 22 players that have been injured for at least two weeks this season prior to this game. Those injuries have included established veterans like Abdallah Bah and Nick Hutton. The club has had six different players struggle with at least 8 weeks out of play with an injury, several of those six needing at least 10 weeks. Stretched across multiple leagues and tough opposition, it’s been a difficult year for the Crows all around.

Andres Garcia, recently making headlines for potential opportunities he may have with MNUFC2, then ran on to a long range through ball before sneaking a shot past the keeper to make it 3-0 at half time. The striker wouldn’t score again on the night, but would be a danger for the entire match, very much showing why he’s an interesting prospect for other parties.

The second half would prove a scrappier affair from both sides, with the cards starting to add up. Murakami would dive on to a free kick to head in a goal for Minneapolis to give the home side hope, but the goal’s hope would be snuffed out after Lucas Hat converted a second penalty for Med City to make it 4-1. Scott Neil would score his second of the night, a curler into the far corner, to make it 5-1, the final scoreline.

The result would provide another blow to Minneapolis City’s hopes of a top two finish this season, while Med City seemed largely unbothered on their campaign for NPSL North glory. Minneapolis City found themselves falling into traps too often on the night, giving away fouls milked out of the match by a Med City side that clearly had a game plan, while failing to ever truly find a way to mark the visiting front line, relying on some big saves from the keeper to avoid a bigger loss.

The Rochester side has won many of its games this season through a gritty, pragmatic style, often focusing on the result more so than a clean sheet or players breaking records. This weekend, however, Med City showed they can be a fierce side, one that plays through, around, and over the opposition with a mixture of approaches.

If nothing else, the night reminded everyone that they should very much be taking Med City, who’ve never won a conference title or beyond, seriously as a title contender.

Med City Head Coach Neil Cassidy told Sota Soccer that this match showed the final product the team has been looking for through its successful but gritty season is finally arriving.

“I think, at the start of the season we were getting into good positions, we were creating opportunities, but we just weren’t finishing. We’re getting into the spaces, the areas, but at the last minute we were getting too selfish, or at times not selfish enough. We couldn’t find that happy medium. Obviously we found that today. The two penalties helped us but I don’t think there was any question that they were penalties. Credit to Minneapolis City, it’s always tough coming here, I think we were just on point today.”

Cassidy added that today’s match showed the importance of mental preparation, with Med City finding a balance between respecting the challenge and knowing they can surpass it.

“I think if you look at the first fifteen, twenty minutes, you’d have thought this game would have a different outcome. We moved a couple personnel around, I think that gave us a bit of a different look in some areas, but in terms of preparation, it’s just knowing and giving the guys confidence. It’s more of a psychological thing today of, you know we know we can play well. We can put the ball away.”

As to how the night’s result made Cassidy feel about the title race, he explained that’s not on his mind right now, and that he avoids even keeping track of points this early in the season.

After just barely managing to slip by the Sioux Falls Thunder with a 3-2 win on the road, Duluth returned home to host the Dakota Fusion, who’ve proven a talented group but one sides can very much score against this season. For the hosting BlueGreens, it’s all about winning, with every point counting as they look to re-lap Med City. Duluth had conceded in just two games prior to the night, but in both they conceded two goals.

It would be a busy night for the BlueGreens, who found two first half goals through a wonderful 45 minutes of soccer from Ukranian talent Kostyantyn Domaratskyy, who sliced a strike diagonally into the far side netting to open the scoring in the 7th minute before moving the ball into the center of the box before slotting in a second goal in the 40th minute.

It would hold at 2-0 into half time, with the next goal coming in the 59th minute when Wynand Wessels, who scored midweek against MNUFC2, rocketed in a wild curving shot into the far corner to give Duluth an almost certain win at the hour mark. The Fusion would find a late goal, beating goalkeeper Michael Garrihy to a loose ball, but it would only make it 3-1 as the BlueGreens continue to stay just behind Med City.

With the exception of the final goal, Duluth continue to be almost unplayable at home. They’ve picked up every available point, something even Med City hasn’t done, while proving incredibly hard to score against. As the Med City/Duluth showdowns loom over the horizon, both clubs’ ability to perform at home will be key.

It’s another big Twin Cities match up as a high performing TwinStars side travels to a Joy Athletic side that’s struggling for results but continues to give opposition a good game. For the TwinStars, Saturday night was another chance to pick up points and distance themselves from the midfield pack. For Joy, a win could be enough to spark their climb up the table.

Joy would find a huge win on the night, the sort they needed to make something of a season that’s gone somewhat adrift. Caputo would open the scoring after a 0-0 first half, with Tayeb Benjaafar equalizing for the TwinStars. Bennett Kouame would find the winner in the 81st minute. The win brings Joy, despite their admittedly poor form, just one point behind Minneapolis City, while the TwinStars remain several points ahead of both.

For the TwinStars, the result is a tough stop to their otherwise strong season. Inconsistency has proven an issue for the side, who in about a week have surprised Minneapolis City, drawn the Fusion, and lost to Joy.

The bottom two sides in the NPSL North face off in a battle to see who will likely finish 8th on the table, with Sioux Falls still looking to win their first game of the season while La Crosse look to get their second positive result of the season. While major success is seeming out of the picture for both clubs, there was plenty to play for here, Sioux Falls with a crowd of supporters, Aris with a reputation to break. It all makes for an interesting match up.

While it wasn’t pretty, Sioux Falls did find a win on the night, surviving two goals from Aris with three of their own to find their first win of the season, a long awaited one at that. The result gives Sioux Falls seven points from eight games, far from a nightmare half way point in the 2022 season and one that keeps them in reach of the middle of the table.

For Aris, it’s another competitive performance but no points to take home, something that’s become all too common for the Wisconsinites. Sioux Falls’ goals came from Tyler Limmer, Max McLaughlin, and Michael Virgen. Diego Arenal and Jorden Verdonk would score for Aris.