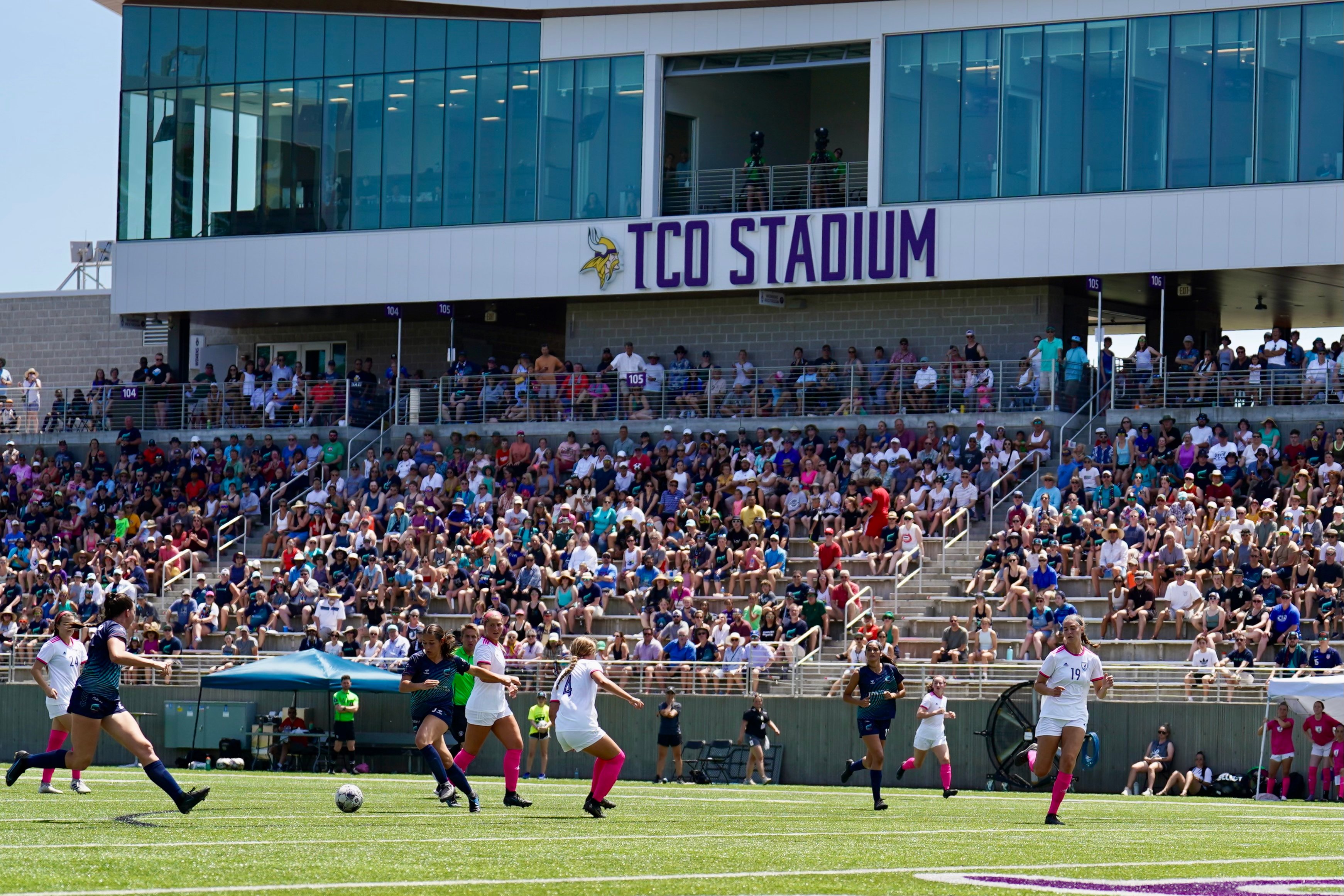 Minnesota Aurora FC and Kaw Valley FC had to battle two opponents: each other and the heat. The kickoff temperature was 96°F with 37% humidity. Although Kaw Valley and the heat created difficulty, MN Aurora dominated possession and won 2-0.

Do The Right Thing – pregame requisites
“The people of Texas are informed that … all slaves are free.” – General Order No. 3, issued by Major General  Gordon Granger, June 19, 1865

After the national anthem, the stadium announcer said some words about Juneteenth. The teams bumped fists with the referees and each other. Cue the Starting XI photos and pregame huddles.

Guess Who’s Coming To [Sunday] Dinner – Lineups
“I’m not gonna stop until I feel like I’ve done what I came here to do, and I don’t think I’m there yet.” – Sydney Leroux

Coach Jessica Smith had Kaw Valley start in a 5-3-2 or a 4-1-3-2. In the middle of that 3-person midfield was scoring leader Raena Childers. Childers has 5 goals and 2 assists in 5 games.

Coach Nicole Lukic returned Aurora to the 4-2-3-1. Arianna Del Moral and Rami Rapp got their first starts. Mariah Nguyen had this game off.

Sangmin Cha, who had Friday’s game off, returned to the midfield.

Maya Hansen said, “It’s so fun playing with Cha. She’s so versatile, and she can just get around people in one second. She makes my job way easier. You saw her put three balls right in front of me to set me up for a great shot.”

She’s Gotta Have It – highlights
“We definitely tried to focus on pressing. I think that’s one of our strong suits. And last time we played Kaw Valley, that was definitely something that worked to our advantage.” – Maya Hansen

19′: MN Aurora’s press was on. Kaufusi was able to poke the ball away and dribble up the field. She hit Hansen in the middle who drifted right and scored for an Aurora 1-0 lead.

49′: Bennett broke out of a double team and found Makenzie Langdok. Langdok bent the ball to Catherine Rapp. Cat Rapp and her turnsy technical skills created space and scored.

A triple Rapp hug was soon surrounded by more players. Harsh heat and high humidity could not halt a hoopla of hording hugs.

59′: Raena Childers collided with Kaufusi but came away with the ball. Childers curled away from both Aurora center backs and passed to Adah Anderson. An Aurora defender poked the ball from Anderson, but Watts ran on to cannon low from distance. Sarah Fuller dove to her right to get her midsection and hands on the ball. If there’s a shot, she’s gotta have it.

Head coach Jessica Smith remarked, “Katelyn Brinkman, she was our outside back on the left side, did a really nice job. Kate Dreyer was in the middle, and I thought she did a good job winning balls in the air and stepping up.”

The Cranes have scored in every match except their pair of games against Minnesota. Their prolific attack includes Raena Childers, Sydney Watts, and Kate Gibson.

Gibson said postgame, “At the very beginning of the game, our shots that we were pulling up were really good, and our mentality going through the entire game . . . I was very proud of how we didn’t quit.”

Kaw Valley head coach Jessica Smith echoed, “When we were able to get the ball forward, there were moments when those three particularly were dangerous — and I mean, they’re special players. At the end, we changed our formation to have five in the midfield and two out front where we’re just trying to be more direct at that point. And I was really proud of the team’s resilience because we didn’t stop: we kept attacking them…. I wish that we could have played more final balls into the box and gotten closer to the goal. We settled for a couple of shots from distance, and you’re not going to beat Sarah Fuller in that way.”

To Aurora’s credit, their defense did well to limit Kaw Valley’s quality opportunities.

Center backs contained Childers all game. The fullbacks limited Gibson to tough angles. Watts took some hard shots, but Fuller tracked and made the saves.

In the Heat of the . . . Day
“Playing on turf adds about 10-15 degrees to the heat. One of the tactics is to water the field before the play, to help reduce some of that heat buildup in the little black pellets.” – Elisa Vicuña

The 96°F heat affected all aspects of the match. Play-by-play commentator Kelly Schultz explained why viewers cannot see most of the fans: “There doesn’t look like there are many fans on that [north] side of the field. Most of them have found shade right underneath the press box.”

Early in the game, Schultz and analyst Kylie Kallman Moore noticed Hansen pouring water on her cleats to cool them off. Later, Rami Rapp left the pitch to change cleats. Moore explained that high temperatures can cause the shoe glue to loosen.

The heat affected players of both teams as they didn’t make as deep of runs and dribbles. The 37′ was when the first corner kick happened for either team. There were fewer corner kicks in general.

What do you do for the club?
“Well, I run a lot of our merchandise. I’m also the referee liaison and the visiting team liaison.”

On the merchandise responsibilities:
“I had ice water for my team back there. I made sure that people stuck to water breaks, making sure that people took that chance. If they were overheating, they’re gonna sit in the shade: make sure that they weren’t overworking themselves.”

In my last Aurora recap, I pointed out how Aurora’s investment in staff and organization help the gameday experience. This is extra noticeable on hot weather days.

She Got Game – Depth and Versatility
“It’s kind of interesting on a team sport because you have young players, you have older players, you have veterans. But ultimately, when you step in between those lines, you’re just a player.” – Crystal Dunn

On substitution contributions:
“It’s really nice to see Catherine Rapp get on the scoreboard today. She had a lot of great combinations with her sister Rami Rapp, and then she worked well off of Morgan Turner. They were able to create different movements, through balls, and opportunities on goal. So that was fun to watch. Jelena gave us a good spark in the second half with her press, her creative movements. She was able to nutmeg a few players and get in line to serve some great balls in.”

Get on the Bus – What’s Next
“You would never expect a flower to bloom without water, but women in sport who have been denied water, sunlight, and soil are somehow expected to blossom.” – Midge Purce

Next weekend, MN Aurora have their last 2 home games.

Until then, as Otis Blackwell sang, “Don’t Be Cruel.”