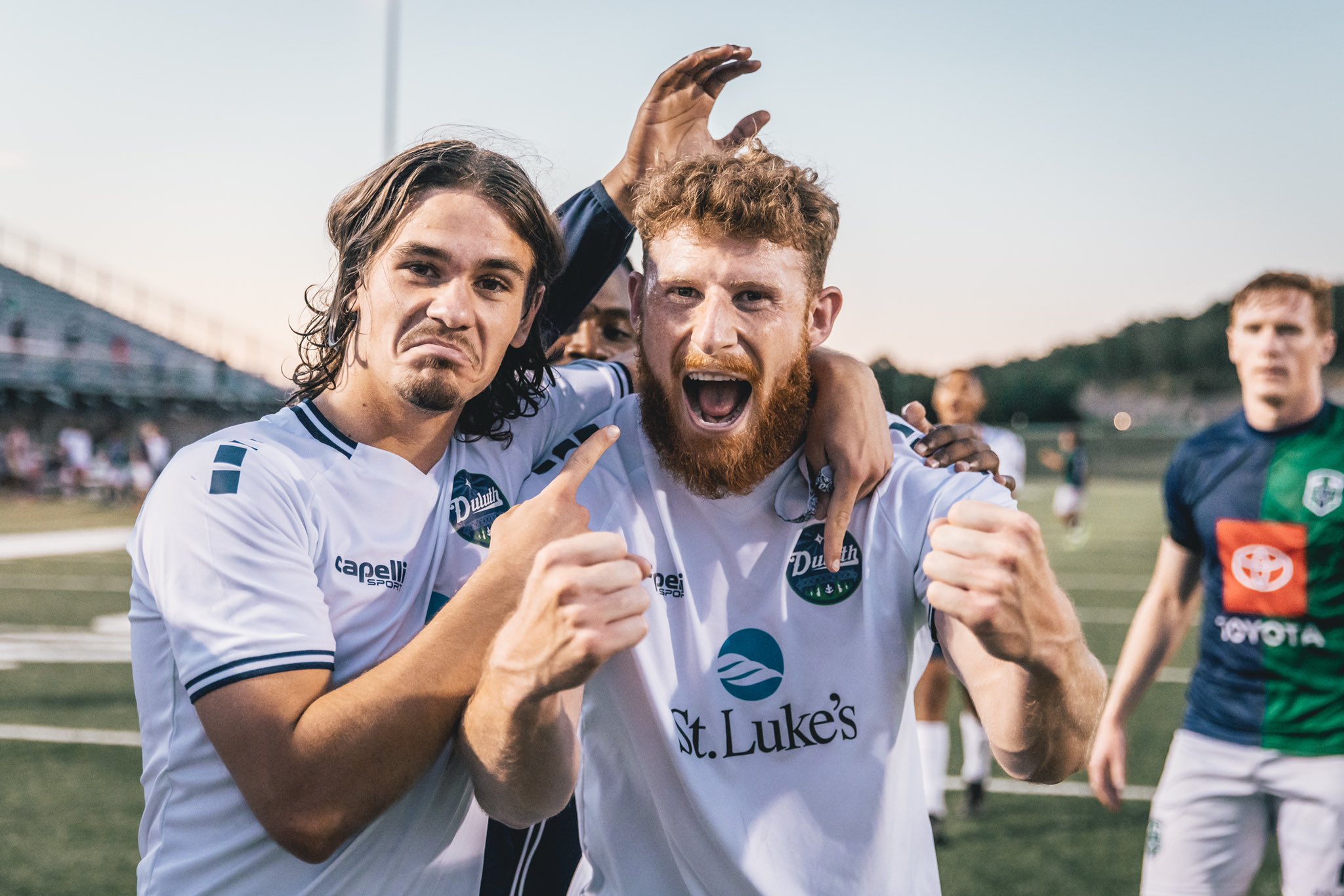 Fresh off a disappointing loss to Joy Athletic last weekend, the TwinStars were faced with yet another challenging night as they hosted Duluth FC, which have found another lane of form since their midseason, and only, loss to Minneapolis City. The BlueGreens will have arrived at the Twin Cities knowing that they needed the best possible results in the lead up to their first face off with Med City the following weekend.

Duluth would very much deliver on the night, managing to find their second 6-0 win of the season. Blake Perry and Felipe Arteaga would both leap onto loose second balls following corner kicks to give the BlueGreens a 2-0 lead at half time.

Santiago Erazo would score after having his penalty kick saved, his second goal of the season, before UWS star Blake Perry scored a deadly diagonal strike to make it 4-0. Substitute Kostyantyn Domaratskyy would score off the bench, before captain Martin Grzywa knocked in a final goal, his first of the season.

It was yet another truly dominant showing from Duluth, who set up their match with Med City on the weekend perfectly with this thunderous scoreline. Perhaps most impressive was the fact Duluth played the match, against the third place TwinStars, with a considerably changed eleven.

Cian Gantley, Wynand Wessels, and Kostya Domaratskyy all started on the bench, despite the fact the latter two scored the three goals in Duluth’s 3-1 win over the Fusion the round prior. Meanwhile, Jake Starling shifted to right back while Rory Carlson started on the left after recovering from an injury.

Duluth FC Head Coach Sean Morgan noted that the rotated roster on the day was a way for the BlueGreens to make use of the depth he and his staff recruited for the 2022 season.

“We’ve been [having] two games a week for the whole of June and we knew we had a squad that’s capable of rotating because we’ve got a lot of talent. We’ve got boys that can come in and do the job. Everyone’s pulling in the same direction, and I think I said the last time we spoke, we’ve got goals in mind for the season and everyone’s doing their part and we need everybody. So, obviously no hesitation putting different boys in different positions. People are versatile, that’s the way we recruited, so they’re more than capable of stepping in.”

Fresh off of a big win in Minneapolis and with Dulut waiting for them on the weekend, Med City returned home to face a quality but beatable Dakota Fusion side, which has struggled to find consistency. For the hosts, the consistency train is all that mattered on the night. Get a win, stay top of the table.

It would be yet another win for the Mayhem, who have seemed truly unbeatable this season. Andres Garcia would grab the opening goal after a very eventful last week, scoring against Minneapolis City after playing for MNUFC2 on trial.

After holding a slim 1-0 lead at half time, Narcis Bou would step up to find Med City’s second goal of the night. It would end at 2-0, not so much of a headline win for the hosts, but another one of those results that pave the way to playoffs and titles.

Following a tough run of matches which has seen Aris lose, and at times forfeit, on a bit of a streak, the Wisconsin club returned home to face the side they beat 3-0 earlier in the year. The reunion sparked the opportunity for another upset, and more points for Aris, or a chance at revenge for Joy Athletic.

Aris’s Diego Arenal would score a hat trick to guide Aris to a historic 6-1 win over Joy, who received two red cards through the night. Not only does this mean the club do the double on Joy, having beat them 3-0 in the Twin Cities, it also means Aris have earned their biggest ever win in the history of the NPSL North.

It’s a tough pill to swallow for Joy, but a wonderful night for Aris. It goes to show that this side, when it’s not hampered by forfeited matches, is able to perform.

The Crows stayed home midweek with a big chance to make up for a poor performance in that 5-1 loss to Med City and get some much needed points against a Sioux Falls Thunder side that has struggled, but just earned their first win of the season the weekend prior. Both sides will have been looking for a win on the night.

City’s homegrown star Zach Susee would find the opener, creating a lead that would hold through half time, only for Glissendorf to equalize shortly into the second half to make it 1-1. Matt Murakami and Aiden Cavenaugh would find two goals for City to get the lead back for the Crows, 3-1.

Samuel Baraka would launch a wild goal into the top corner to keep Sioux Falls in the match, but Minneapolis City would hold on to their thin lead and secure a big win to keep themselves well and alive in the NPSL. It was the exact sort of result the hosts needed after their tough loss last weekend.

This, needless to say, is the match up we’ve been waiting for. Within weeks, it was clear these two clubs were the ones gunning for the title. Duluth has the wild headline wins, two 6-0’s and a 5-0 to boot, while Med City have quietly ground out the competition to remain undefeated. Duluth started the day four points behind Med City with a game in hand, having yet to play Med City at all. That’s to say that while Duluth needs a result today, Med City can survive regardless. If Duluth does win, the pressure will be on Med City to perform on the road later in the season against Duluth.

The first half of the match would prove an exciting but goalless affair, with both goalkeepers coming up big while several long range efforts from the two clubs left much to be desired. It was clear that half time, which included a 0-0 scoreline, provided a chance for both managers to remind their players how much they needed a goal.

Whatever was said at half time, it worked. Med City would win a free kick near the box, with the initial effort blocked immediately by Duluth’s wall. The deflected ball would be lobbed back into the box, where it bounced into the feet of Andres Garcia. The talented forward would calmly volley the ball into the net and give the Mayham a massive 1-0 lead that, at least for the moment, had Med City looking North conference champions-elect.

Duluth would go to their bench soon after, moving pieces in and out of the match. The BlueGreens had already subbed out Diego Valle due to injury in the first half, but now brought on the likes of Sam Thornton and Keegan Chastey. Thornton had briefly played against the TwinStars midweek, having just recently recovered from an injury after bagging a couple goals at the start of the season. The English striker would make an instant impact, running on to a through ball into the box and slotting home the equalizer in the 64th minute to make it 1-1.

For the next twenty minutes, Med City and Duluth would dig in for an absolute flurry of all or nothing chances. With little time left, fullback Cian Gantley would run into the box with the ball at his feet from the left edge before being pushed down, earning a penalty. Thornton, who had scored a penalty earlier in the year, stepped up and snuck his effort past the keeper’s fingers to make it 2-1, the final score.

The result puts Duluth in an advantageous position. If the BlueGreens beat the Dakota Fusion midweek, in which matches are only being played by clubs with a game in hand, they will go top of the table, no longer behind on games played.

Following losses by both clubs, a battle for pride commenced between the TwinStars and the Thunder. The TwinStars needed a result to reassert their presence in third place, an achievement for the recently-returned club. For Sioux Falls, points are key to staying at least second-to-bottom this season, as Aris sit just one point behind them prior to this match.

With goals quite literally at the start and end of the match, Sioux Falls would pull off a massive win on the night, surviving a TwinStars comeback, inspired by Sidike Jabateh.

The opening goal for the visitors would come from James Bolger in the 1st minute, the final goal would come from Tyler Limmer in the 95th minute. Sioux Falls now have ten points and look secure from dropping into last place.

It’s another big match up between Joy Athletic and Minneapolis City, with the hosts coming off of a wild 6-1 loss to Aris while Minneapolis City continue to rollercoaster between losses and wins in NPSL play. A win for Joy would bring them just one point behind Minneapolis City, who would retake third place with a win and a bad result for the TwinStars.

It would prove an eventful meeting between the two clubs, whose budding rivalry has entertained supporters and neutrals alike since 2021. The real headline would come about 20 minutes in, when Joy’s keeper, would be sent off for a foul at 0-0. Lionel Vang would score for City minutes later, but Philip Caputo would equalize for Joy just before half time to keep things interesting.

The Crows would make the most of half time, however finding the winner via another Lionel Vang strike in the 60th minute to win 2-1, securing a rare pair of consecutive wins as they climb into third.

With La Crosse Aris entering this match on an unexpected high note, the Dakota Fusion were under pressure to find a win, their first in some time, and avoid losing to Aris for the first time since 2019. Pride aside, the Fusion could also take advantage of the points dropped by Minneapolis City and the Minnesota Thunder with a win.

The Fusion would step up big on the night with a multi goal win to keep themselves well within the battle for third and fourth place. It’s a tough break for La Crosse Aris, following a historic win.

The Fusion’s goals would start with Tre Bonaparte, then a brace from Shoki Yoshida and a strike from Kenshiro Yamaguchi. An own goal from Aris would help the Fusion along, though Nathaniel Lancaster-Robinson and Jacob Battista would score for Aris. Noah Boyce would get the Dakota Fusion’s final goal of the night.