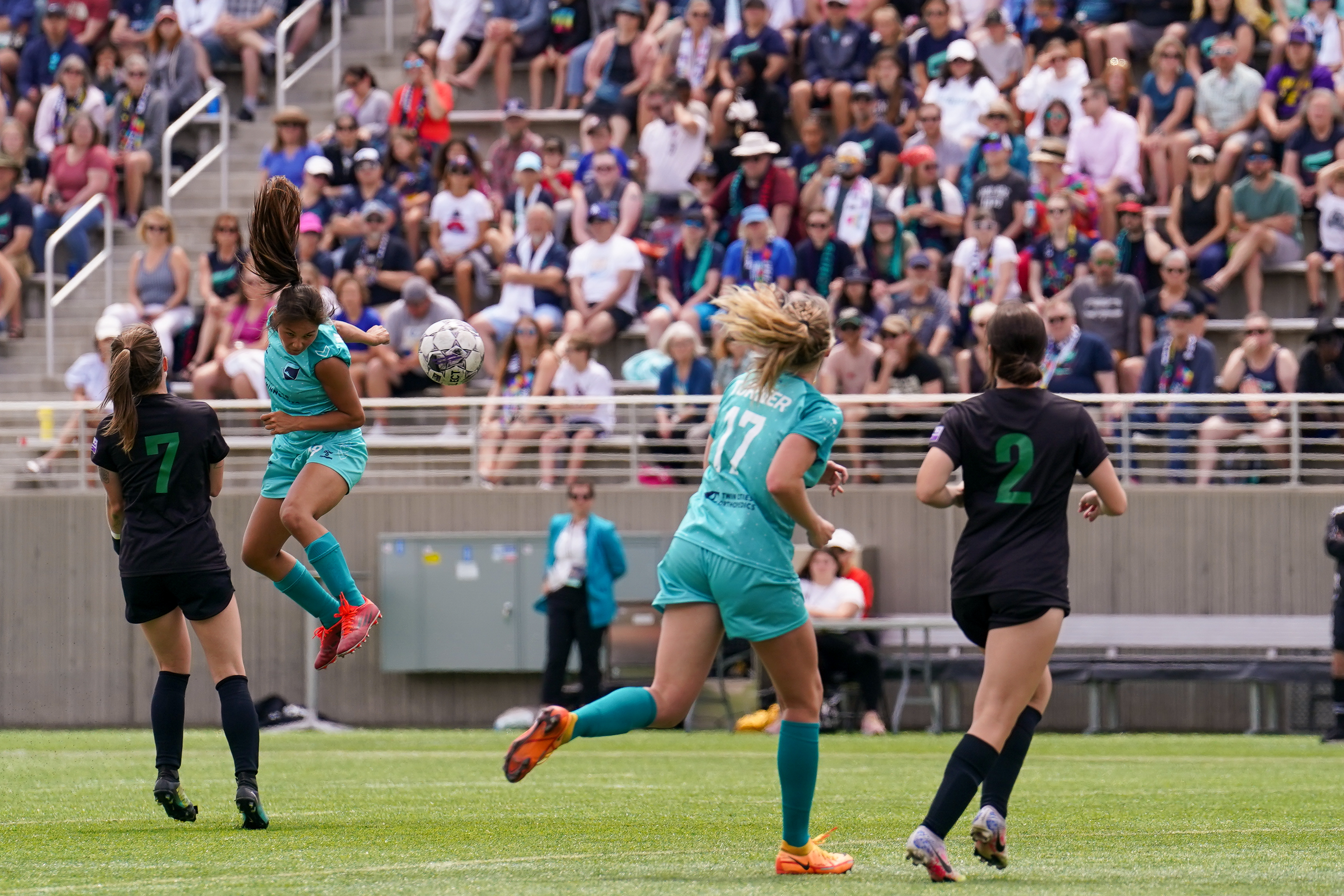 The Heartland Division table shows Minnesota Aurora in first and St. Louis Lions in last. Aurora came into this game on a seven-game winning streak. St. Louis have lost all nine games this season. These stark contrasts plus the quick turnaround from Friday meant this last regular season home game featured a different Aurora starting line up.

The visitors started in a 4-2-3-1, but one of their leading scorers Chloe Netzel did not make the trip. Their other leading scorer Krystal Kohenskey started at striker.

While it was not scorching hot, the wind was a factor. Aurora coach Nicole Lukic explained, “Today was a little bit windy. So we encouraged them to play more on the ground — or lower if they’re gonna go long. It definitely helped us out in the second half going with the wind, even though we did see a lot of balls run out of bounds too. But I thought we weathered the storm and we improved our possession.”

In the 7′ Jelena Zbiljic sent in a cross that hit Lions center back Kelsey Kehoe in the upper arm. Referee called “handball in the box.”

In the 20′ St. Louis backpassed to GK Madalyn Davis. As the ball took a big bounce, Turner ran onto the loose ball. A charging Davis tripped Turner who tumbled to the turf. Davis escaped with a yellow card, but once again the referee pointed to the spot.

This time the other Morgan, captain Morgan Stone fired a similar penalty kick. MN Aurora were up 2-0.

Shortly after Taylor Kane made two solid saves including a leap to her left, St. Louis was back on the attack. Kaufusi cleared the ball out the side.

On the Lions throw-in Aurora dangerously headed the ball to the middle. Captain Krystal Kohanskey had a clever collection and deposit to capitalize. The shot split Preston and Stone and beat Kane to pull the Lions back within one.

In the 41′ Ostrem threaded a needle with a pass to a hard cutting Mariah Nguyen. Nguyen outran her pursuers for a left-footed finish. Aurora went back ahead by two, and at half time the score was 3-1.

In the 59′ Rami Rapp dribbled out of a crowd and passed to fellow center mid Morgan Stone. Stone dribbles 20 yards and nails a stone-cold stunner inside the far post. For a celebration, someone from Aurora’s bench handed Stone a cellphone to take a team selfie.

In the 79′ Lions captain Krystal Kohenskey attempted to run onto a ball but was boxed out by Catherine Rapp. Kohenskey two-hand bumped Cat Rapp and then followed with a harder two-hand shove in the small of the back. She earned a yellow card to match her headband.

For a while, all three Rapps were on the field for the third time. No tombstone piledrives but Aurora won again. Overall, both starting goalkeepers played well. In her first Aurora start, Taylor Kane tallied 6 saves and only allowed 1 goal. As a red-shirt freshman for Western Kentucky, Lions GK Madalyn Davis did not see any game time. She had plenty of saves today despite allowing four goals but 2 were penalties.

St. Louis had nice give-and-go and other one-touch passes to progress the ball. Their defensive structure was led by center back Kelsey Kehoe, and center midfielder Kierstyn Weaver helped them play through the middle.

However, the swarming Aurora press turned the ball over plenty. Despite MN Aurora being hasty to shoot or cross at times, they dominated possession and attacking chances. Aurora finished when they needed and then some to show why they are on top of the Heartland division table.

Tagging In and Out: Squad Rotation

Morgan Stone’s two goals and solid play earned her the star of the game. The announcers talked both Stone as well as Kristelle Yewah stepping into more those leadership roles. Before the game Yewah lead Aurora huddle in a chant to hype up the team.

I asked Morgan if she plays differently depending on her center midfield partner. She explained, “When I was playing with Shelby [Hopeau], we both alternated who was joining into the attack, but when Rami [Rapp] came into the game, she’s traditionally more of an attacking player. So, Nicole told me before the second half that I might have to sit in a little bit more and find my moments to join [the attack] . . . but be more defensively sound.”

Regarding that rotated squad, Head coach Lukic stated, “Lots of quality minutes for different people today . . . Lydia [Ruppert] in the attacking mid was able to find some nice combinations and through balls. And then to be able to go to Olivia [Graupmann] in the game and give her that experience was important to us as well.”

Another Sold Out Crowd

One of the recurring remarks from opposing coaches and players is the game-day atmosphere. Lions fullback Riley Casey said, “Obviously, we’re having a rough season,” but added, “Playing out in this kind of environment is awesome. A lot of us have never played in front of this many people. We’re coming out here. We’re trying to play with some heart, some passion for each other. We’re just coming out here to have some fun.”

Nicole Lukic has also been consistent at thanking the crowd, including the Revontulet supporters: “We just love to hear the creativeness of the Supporters Group and all the chants. It’s been so great. We just have the community to support the game here.”

The announced attendance was 5,944 — not as high as Friday’s 6016, but well worth Aurora’s decision to  release the additional 1000 tickets for both games.

Up Next on the Card

In the green corner, St. Louis Lions have now through July 4 off. They next play at Joe Bean Stadium at Wheaton College on Tues. July 5.

In the teal corner, MN Aurora FC make the same trip but much sooner. They will play the Chicago Dutch Lions this Thursday at 7:00 PM.

During the broadcast, play-by-play announcer Kelly Schultz mentioned the dates for the USL W national playoffs: July 13, July 17 semifinals, and July 23 finals. MN Aurora has put in a bid to host, but league has yet to announce playoff locations.