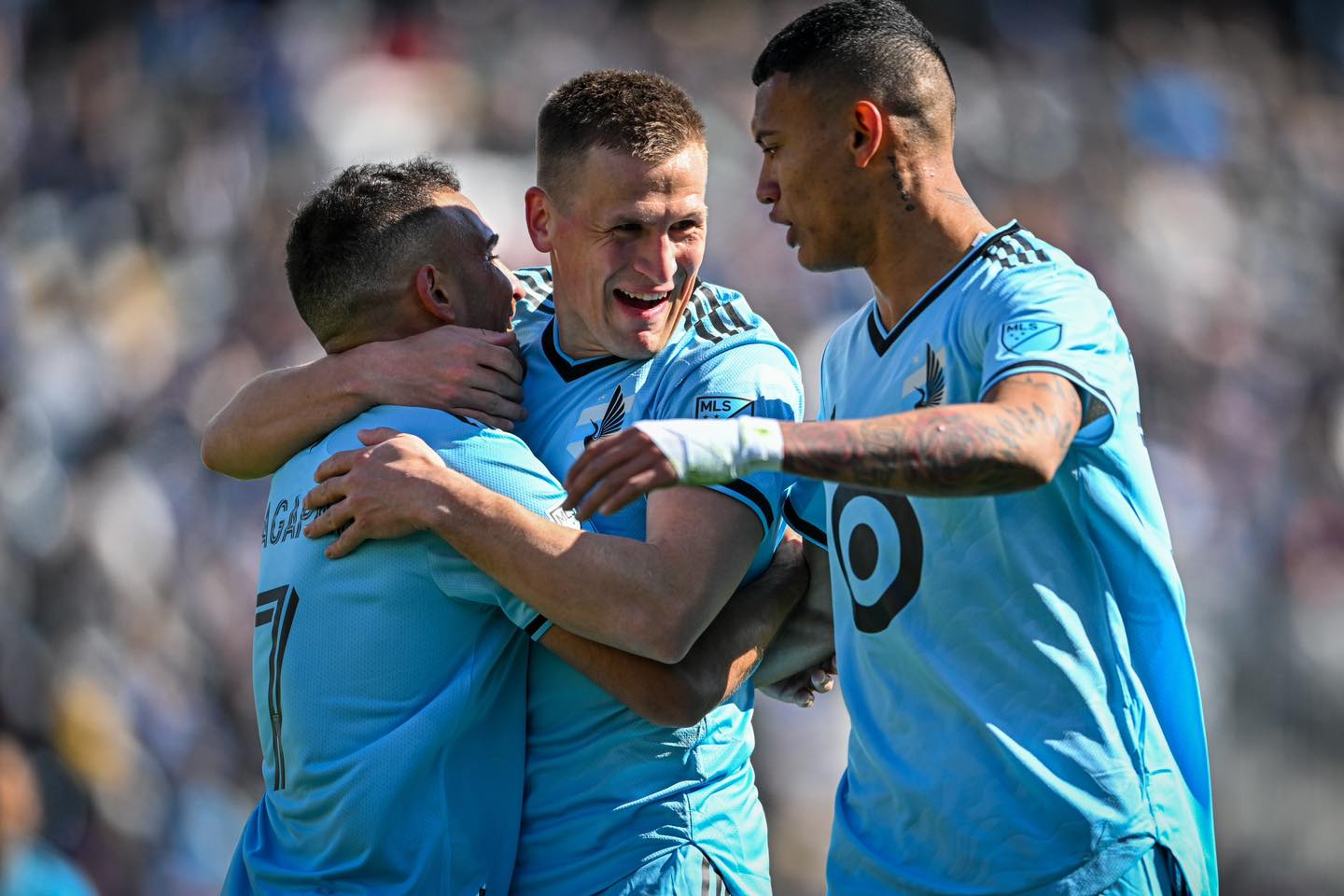 This is quite the road trip for Minnesota United FC – Boston, then Miami, then Los Angeles. The Loons have zero points so far on this swing, but their frequent-flyer accounts must be looking pretty healthy.

Wednesday night’s game is at 9pm Central, and once again, it’s on Channel 23 in the Cities, as well as BSN Extra, which I hope is conveniently located for you because if you can’t find it, I probably can’t help you. It’s going to feel very odd when we stop referring to TV channel numbers entirely, but I can’t say it won’t be easier.

My kingdom for a fullback

So much attention has been focused on the punchless Loons attack this season, and rightly so. Just to give you one statistic: Franco Fragapane and Bongokuhle Hlongwane have been given almost all the minutes at left wing this season. Since April 1, a span of 12 games, the two have combined for six shots on target. Six!

Fragapane has two shots on target in his last nine games. Hlongwane has two in his last ten games. They’ve also combined for two assists in that span, both by Hlongwane against Chicago; the duo has zero goals this entire season.

Forget the tire fire at striker this season; those numbers are impossibly low. If they had combined for six GOALS in that span, I’d be wondering if they could maybe pick up the pace a little.

Trying to connect the lack of attacking output and the misfortununes that have actually befallen the Loons this year, though, is a little harder. Emanuel Reynoso had a slow start, and Robin Lod and Luis Amarilla both got sick midseason, but the three have been present, at least. Reynoso has started every game. Lod and Amarilla both missed one league match each.

Where things have gone wrong, though, is further back toward the Loons goal. Allow me to recap the Loons’ fullback issues, just for the people who may have come late into this particular movie:

First, Romain Métanire pulled his hamstring in last year’s playoff game in Portland. Preseason began only about two months after that game, and Métanire’s leg was still bothering him, and the team brought him back slowly. Then he reinjured it in a preseason game. Then he reinjured it in a regular-season game. Then he played in a team friendly and injured the OTHER hamstring. The Loons got 23 league minutes this season from their former All-Star right back, one who has been a big part of their success on both sides of the ball.

Second, at the beginning of the year Hassani Dotson was, finally, going to get a run of games in the center of midfield, where he was going to get a chance to establish himself as something other than a versatile player with huge potential. This lasted two games, until Métanire’s backup, Oniel Fisher, got hurt. Dotson played four games at fullback, one more in central midfield, then ripped up his knee and was lost for the year.

Third, left back Chase Gasper – one of the building blocks of the team – left the team to take care of his own health, then was traded to the Galaxy to help him out with a fresh start.

Fisher has been ineffective, and has been replaced by DJ Taylor. The Loons brought in Kemar Lawrence to play left back, which at least kept them from dipping further into the reserves to find a left back, but by any stretch of the imagination, none of the top four fullbacks that Minnesota brought into the season are currently getting minutes.

I’ve been digging through the stats (all stats in this section are from FBRef.com, by the way), and here’s what I’ve found.

First, last season, the fullbacks were near the top of the charts for touches per game. Reynoso led the way, of course. But Métanire was third among the regulars, with 70.2 touches per 90 minutes, and Gasper was fourth with 66.0. This year, those numbers have dropped; Lawrence is averaging 55.9 touches per 90, and Taylor is at 55.5.

Looking at the passing numbers tells a similar story. Métanire completed 6.06 progressive passes per 90 minutes last season (that’s passes that move the ball 10 yards forward, or are into the penalty area), second on the team. Gasper completed 4.18 per 90. This season, Taylor is averaging 3.42, and Lawrence 2.36.

Put them together, and the two starting fullbacks are averaging 25 fewer touches per game, and more than four progressive passes fewer. The fullbacks get the ball less and pass it less this season. It’s not surprising, exactly – find me the MLS team that can replace all their top players at any position without taking a hit in production – but it’s a hint at what is going wrong this year.

The Galaxy have been almost as weird as the Loons this season, honestly. Some of their big signings (Douglas Costa, Kevin Cabral) haven’t worked out that well. They’ve had trouble scoring goals (18 in 15 games). And they are in the weird situation where suddenly they’re not the team in town that’s getting all the big-name European veterans; five years ago, MLS would have been furiously rewriting rules to get Giorgio Chiellini and Gareth Bale onto the Galaxy, rather than having them slot in on the LAFC roster.

In their past two games, though, the Galaxy suddenly seem to have found a key (noted by the ever-excellent Matt Doyle): playing Chicharito and Dejan Joveljić up front together. This resulted in four goals against Austin and one against Portland, and even if it doesn’t naturally match the shape that Greg Vanney wants to play, it’d be kind of surprising if both weren’t in the starting lineup from the beginning against the Loons, just to see how things play out.

Stop me if you’ve heard this before, but the Loons spent most of the match on May 18 rolling up decent scoring chances but failing to finish. A Sacha Kljestan penalty put the Galaxy in front in the 83rd minute, but Robin Lod scored four minutes later, and the game ended level, with the Loons piling up nearly 3 expected goals but scoring just once.

4 – Goal contributions from Joveljić after entering as a substitute against Austin. It was the first time in MLS history a substitute had four goals / assists in a single match, and he did it in just 34 minutes.

174 – Minutes for Gasper this year for the Galaxy. The former Loon has played in five games, starting once.

When it rains, it pours, and it’s pouring on the Loons right now. Nothing’s going right. Galaxy 2, Loons 0.