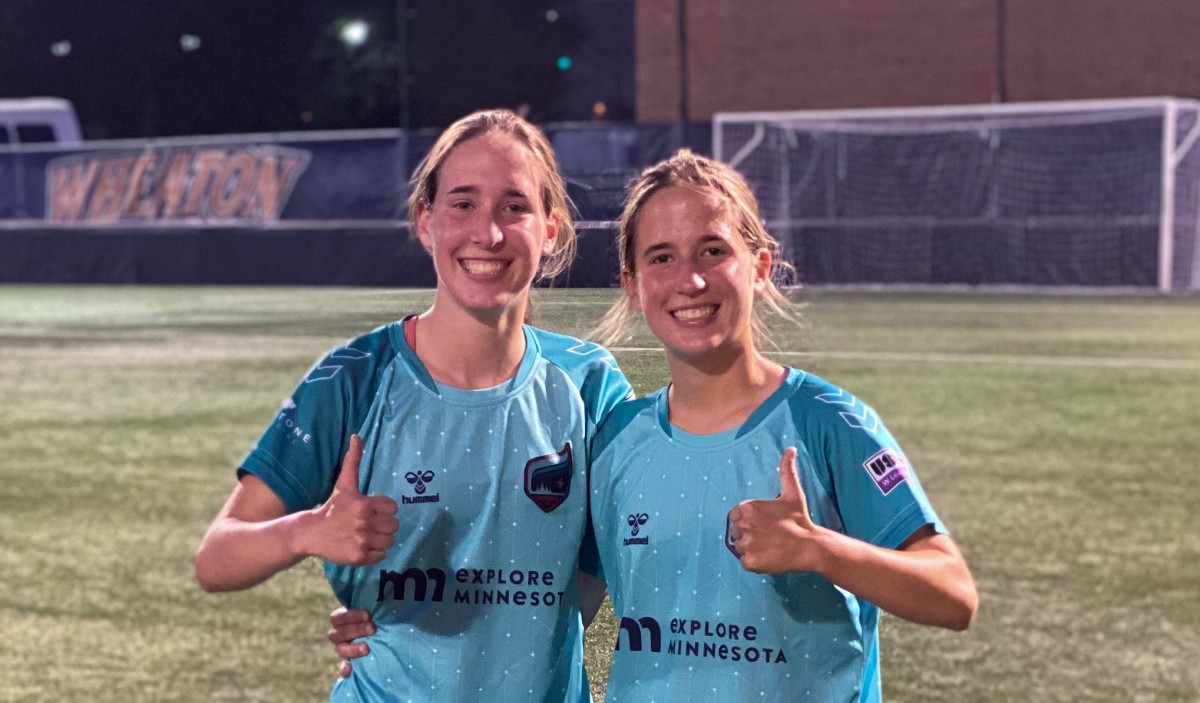 Last night, Minnesota Aurora took on the Chicago Dutch Lions for the second and final time this season. Six days ago, Aurora hosted the Dutch Lions, and after a 1-1 score at half, Aurora won 3-1.

This time, Aurora headed to Wheaton, IL to play at Wheaton College’s Joe Bean Stadium. The stadium is a full-sized 120 x 75 yards with no American football lines. The last time Aurora played on such a pitch was June 2 at Swope Soccer Village versus Kaw Valley.

For this old-school Minnesota soccer fan, there was an ironic disquietude of seeing “Thunder” banners, albeit in Wheaton’s orange and navy, not in MN Thunder gray and navy. Possibly for the Chicago soccer fan, it was weird to see a team named “Aurora” from Minnesota, not from Aurora, IL a suburb of Chicago just 18 miles south and west.

Similar to the last match, the Chicago Dutch Lions played tough defense and kept it close in the first half. Eventually, Minnesota’s speed and depth took over in the second half and put the game out of reach.

With What Ingredients Are We Cooking These Eggs?

Chicago Dutch Lions started in the same 4-1-4-1 as last week, but with a few different players. Notably, Katharine Stephens, who scored the lone goal in the Dutch Lions’ 3-1 loss to Aurora, was absent. More notably, last week’s captain center back Sarah Hagg was given goalkeeping duties for this match.

Minnesota started in the usual 4-2-3-1 with all the usual starters. Forward Maya Hansen, Sangmin Cha, Addison Symonds, Captain Makenzie Langdok, and Sarah Fuller all return to the starting line up.

The overall speed difference created multiple imbalances throughout the game. The Chicago Dutch Lions were pressing with just one player until they wisely dropped to contain or selectively pressed with more numbers. After the first water break, the Dutch Lions played out the back much less frequently due to the Aurora press.

Aurora’s speed advantage often gave them superior numbers in defense and attack. But before the numbers talk, let’s talk about cooking eggs.

How Did Aurora Cook, Eggsactly?

Over Easy: Long Passes Over the Top

As in the previous matchup, the Lions’ 4-1-4-1 often dropped into a crowded 4-5-1 in defense. Also, like the previous game, Minnesota found success by bypassing the midfield completely. Aurora frequently tried to hit attackers on the run by going over the top of the Dutch Lions midfield.

In the 14′ Morgan Stone sent in a long ball that split the two center backs and hit Maya Hansen on a well-timed run. Hagg closed the distance, and Hansen dribbled around her to put Aurora ahead 1-0.

In the 61′ Aurora midfielder Morgan Stone dribbled right, water-swirled a step-over or two before Dutch Lions fullback Alexa Joshi tripped Stone in the box. The referee pointed to the spot for a penalty. Hardened by the experience and determined to make the Chinese Triad — i mean, Chicago Dutch Lions pay for their crime, Inspector Stone shot, and the ball went in the net with a powerful clang.

Sometimes delicious eggs take time. MN Aurora kept the ball moving around like a whisk. Eight passes later, the ball was in the net courtesy of the first Rapp-to-Rapp goal in Aurora history. In the 74′ Rami split three Lions to hit an on-side Catherine Rapp, who scored with a creamy smooth finish on the pitch. Who needs a den of Lions when you have the top Cat on the field?

The head coach wRapps it up this way:

“There was good combination play between Rami Rapp and Cat Rapp. They really helped us control our tempo in the second half. Cat Rapp really opened up the game for us and created a lot of opportunities toward goal.”

In past Aurora games, the referees have allowed both teams an amount of physicality. On Thursday, the center referee seemed to err on treating every player as “Fragile, Handle With Care.”

Early on Cha tracked back to help on defense and doubled teamed a Lion with the ball. The referee blew the whistle despite little contact.

Later in the first half, Maya Hansen and Alexa Joshi got into a shoving match which seemed like small hash browns. After the center ref and assistant ref discussed the matter, Hansen was shown a card the color of an egg yolk.

The exception? In the 41′ Zbiljic was taken down by Sarah Hagg in the box. Hagg slid in hard and appeared not to get any of the ball. In a rare moment of restraint, the referee allowed play to continue.

Minnesota Aurora would adapt to the way the game was being called. The referee would whistle the Lions for light contact giving Aurora free kicks in the second half. Even Joshi’s trip on Stone in the box may have been deemed incidental contact and “play on” for some referees.

The Almost Goals: Lions and Offsides and Crossbars, Oh My!

There were several Aurora goals called for offside. One could fault the Aurora attackers but credit the Lions for holding the back line at times.

Cha’s free kick landed to Hansen in the 4′. Hansen put the ball past Hagg but cracked the back line’s defensive shell too soon. In the second half, Cha had a nice give-go-give back to Cat Rapp for a goal, but Cat’s last cut to open space was too soon.

This writer wants to drink in a fullback-to-fullback goal before the season ends. In the 18′ Eli Rapp drip-dropped a cross to Makenzie Langdok. Landok shot and nutmegged GK Sarah Hagg. The ball sat on the line until Hagg collected it. This felt like seeing a delicious glass of eggnog with nutmeg but not being able to drink it.

You throw enough eggs around a kitchen, some are gonna break the wrong way. In first-half stoppage time, Maya hit Mariah who shot off Hagg’s mitts and then off crossbar. In the second half, Langdok ran onto a loose ball and clanged the crossbar.

Everything Omelette: Bring All the Ingredients

There is strength in numbers. On Jim Kane’s facebook stream, he remarked “about 25 Minnesota fans out here, maybe 20 or so Dutch Lions fans.” While I cannot confirm these stats, Minnesota outnumbered Chicago in other ways.

With rare exception, Aurora outnumbered the Dutch Lions around the ball. The Lions best attacking chances were on a 2-on-5 counter and a 1-on-2 strike from 25 yards out that went high. In the attack Aurora players were quick to cut to support the ball.

Often in lower-league soccer, the home team has the deeper bench. On Thursday Chicago had three outfield substitutes. By comparison, MN Aurora brought a full bench of seven players. All six outfield substitutes and backup goalkeeper Taylor Kane made it into the game.

“The thing about this team is that there is a lot of creativity and players with different skills. It’s been cool to see how we can put different players on the field and how natural it looks, the combinations we continue to create. It’s so fun to be out here!”

MN Aurora also hired a full coaching staff. Aurora have a head coach, two assistants, and a goalkeeping coach. Coach Christina Murillo helped the Dutch Lions put two defensive first halves for the Chicago Dutch Lions. However, she can only do so much as one person: in practice, off the field, and on game day.

As an everything omelette, MN Aurora brings the sauteed vegetables, the bacon, the sausage, and some melted cheddar and Swiss all together.

While most of the Heartland Division has but 2 or 3 games remaining, the Chicago Dutch Lions still have 5 games to play. This includes a bad-weather makeup game versus crosstown Chicago City. Their condensed schedule continues as they host Kaw Valley this Saturday.

Minnesota Aurora FC heads to Green Bay for a Thursday-Saturday double header on July 7 and 9.

Will the two terminal tests between the top two teams wear the weight worthy of what’s to win? We wait and wonder.