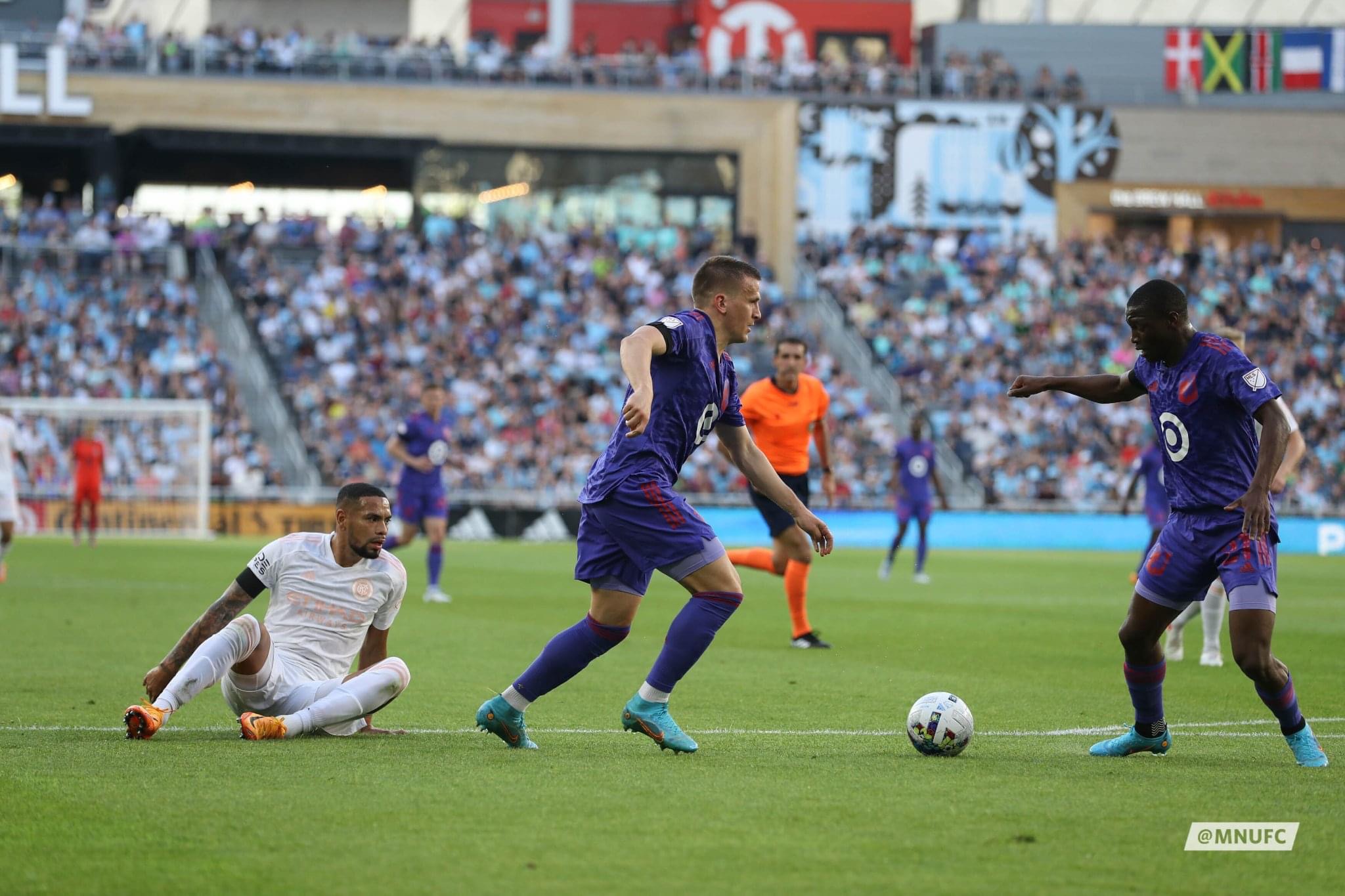 Minnesota United returns home for its first competitive game at Allianz Field since May 28, taking on Real Salt Lake on Sunday evening at 7pm. The game is on Bally Sports North EXTRA –- why it’s always capitalized like that, I don’t know -– and the CW Twin Cities (ch. 23 over the air), as well as on the radio on SKOR North 1500 AM.

No longer a fortress?

It remains unfortunate that the quirks of the MLS schedule dictated that the Loons would play five home games in March and April this season, but none in June. That said, though, home has not exactly been a happy place for the Loons this year.

Minnesota is one of six MLS teams that doesn’t have a winning record at home this year. The Loons are 3-3-2 at Allianz field, matching four other teams with as many home wins as losses this year (D.C. is the only team with a losing record). Even in the U.S. Open Cup, the Loons are only 1-1 at home.

This wasn’t true in either of the “normal” years the Loons have played at Allianz Field. Minnesota only lost once at home in 2019, with ten wins and six draws, and was 10-4-3 at Allianz Field last year. Players repeatedly spoke about how they were content with draws on the road, but expected to get three points every time at home, and how frustrated they were when they got a draw – or worse – on their home field.

The Loons closed out their pre-international break schedule with one of their most disappointing home weeks of all time, with a loss to third-division Union Omaha and a truly dispiriting defeat against NYCFC within the space of four days. A successful friendly against SC Paderborn – four goals and a beautiful evening – may have taken some of the bad Allianz Field taste out of their mouths, but now that the games matter again, it’s time for Minnesota to start establishing their home-field advantage.

After a home-game-free June, the Loons are spending most of the month at home. Sunday’s game is the first of five July home games. If Minnesota’s going to move up the Western Conference standings, getting three points at home in most or all of those five games will be key.

I’m just going to say it: Real Salt Lake is the most anonymous team in MLS.

I’m sensitive to saying this, because in some ways, every MLS team from the nation’s interior is pretty anonymous. In a league that’s so coastally focused, I feel like all the teams in flyover country need to stick together, but RSL just feels like a blank space.

They don’t have an established star. They don’t even have an unsung hero. They don’t score a lot of goals (20, the same as the perennially misfiring Loons), nor give up many (19 this year). Their underlying numbers aren’t any better, practically the same as their actual numbers. The guy that Loons fans know best on their team, keeper David Ochoa, hasn’t played a league game this season.

The most news they’ve made lately is from their horrible owner, Dell Loy Hansen, who hasn’t been the owner since the middle of last year. Beyond their ownership saga, last year their biggest headlines came from one of the oddest moves I can remember in sports history, when head coach Freddy Juarez left in the middle of the season to become an assistant on Seattle’s staff. They also lost the best player from last year’s team, Albert Rusnák, to Seattle.

Unless you are a true MLS sicko, I will bet you cannot name four players on the RSL roster.

Oh, and by the way, here is where I tell you that RSL is third in the West this season and made the Western Conference Finals last year, and nobody really knows why.

Their roster is made up of minor That-Guys, in the sense of “Oh, I remember That Guy.”

Anyway, my preview is that RSL is good and nobody is quite sure why. It definitely has something to do with head coach Pablo Mastroeni, but that’s all that anyone knows for sure.

Oddly, these two teams haven’t played for more than a year, with the last game coming at the end of May last season. It was so long ago that Ramón Ábila played for the Loons (naturally, as a sub). It was also Adrien Hunou’s first game for MNUFC. Niko Hansen scored his only MLS goal for Minnesota that day, a 78th-minute strike that canceled out an early goal from Damir Kreilach, at the game ended in a 1-1 draw.

0.96 – Goals Added above average for Justen Glad, according to American Soccer Analysis (ASA), tops on the team for Real Salt Lake.

1.12 – Goals Added above average for Kervin Arriaga, tops for MNUFC, as a comparison.

4.56 – Expected goals minus goals allowed for Dayne St. Clair this season (again, from ASA). Earlier this year, St. Clair was leading MLS by more than two goals in this category, but his lead has dropped to 0.13 over of Steve Clark of Houston.

These two teams don’t score much, and neither one has a real game-breaker, except for maybe Emanuel Reynoso, so it’s set to be an extremely boring game. That’s why I’m predicting a seven-goal thriller, with Minnesota winning 4-3.