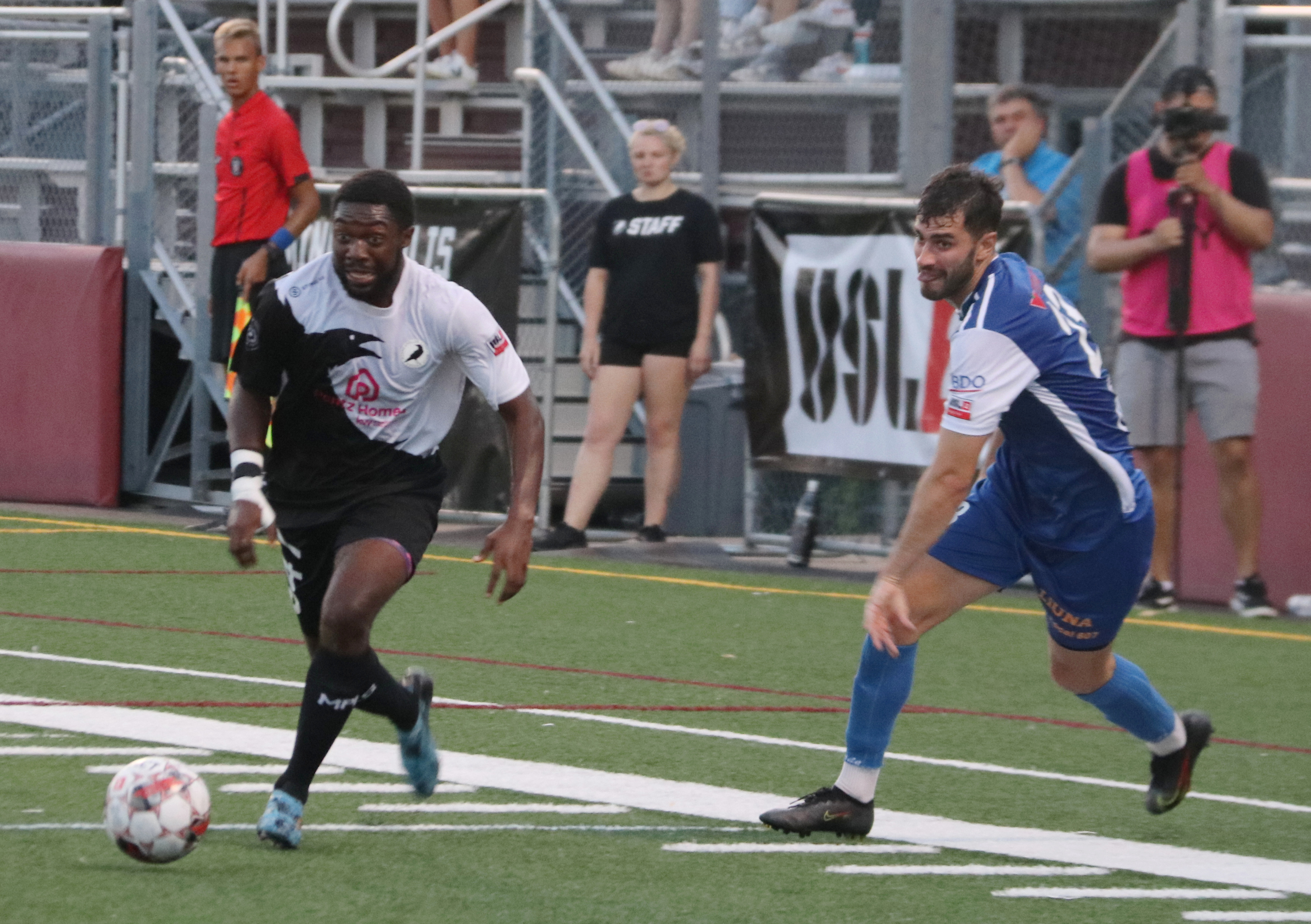 Minneapolis City SC had every reason to give up in their 2-1 home loss to Thunder Bay on Wednesday night in USL League Two action.

Yet, the winless Crows managed to keep believing and gave themselves a bright spot late with a stoppage time goal by Sydney Tume. However, early first-half and late second-half goals by the Chill proved to be too much to overcome.

The Crows lone goal of the match came in the 93rd minute as Tume found the net after connecting on a give and go pass with Loic Mesanvi.

“It was kind of a blur,” said Tume. “I started on the left, found some space. Zach (Susee) got me some good space out wide so I got space inside. Loic was great moving up top, hit me 1-2 perfect ball back and I hit it in.”

“He was phenomenal,” said VanBenschoten of Tume’s play on Wednesday. “That’s the Sydney we hoped to see and one of the best goals we’ve ever scored.”

The Crows certainly took advantage of a tired Thunder Bay team that was playing their fourth game in six days as part of a United States road trip. City had multiple corners in the second half putting specialist Aidan O’Driscoll to work.

O’Driscoll’s corner that was headed out and played back into Jack Barry for a header that went wide in the 50th minute was the first chance for the Crows in the second half.

“It was better execution in the second half,” said VanBenschoten, saying his team didn’t change their tactics. “We know this team is tired so keep attacking them down the side and they’re going to wear out.”

Bernard Assibey-Rhule’s long wide shot over the crossbar and out in the 57th minute followed. The best pure chance prior to Tume’s goal came in the 68th minute, when O’Driscoll’s second corner in as many minutes was played out to Mesanvi, who then set up Jack Barry in close but Thunder Bay goalkeeper Alejandro Chavarria was able to collect it.

Thunder Bay sub Daniel Bricker then scored in the 84th minute off a cross for the two-goal advantage, setting up Tume’s stoppage time goal.

“Tough loss but we kept fighting to the end,” said Tume. “That’s one thing about us we always fight to the end no matter what it is.”

The first half was dominated by the Chill as Sebastian Bocaz Canales had a long run off a counter, then set up Andrea De Vincenzi on a through pass who made a long run down the right side before converting a 1-on-1 chance with the Crows keeper Kaelen Matascastillo.

“We just have to find a way to stop the ball,” said VanBenschoten. “Clearly (De Vincenzi) was going to be their target and we knew he’d be dangerous. We got to recognize that right away.”

After the goal, Thunder Bay played a possession-heavy style, preventing any major chances for City outside of Mesanvi’s shot over the crossbar in the 34th minute.

“At this point we have nothing to lose,” said VanBenschoten. “We have to find the belief even when it is not there and that was the second half.”

Tume said giving up the first half goal impacted his team.

“After that first one going down, we’ve been doing that a lot all season, so heads go down and we try to pick ourselves back up,” said Tume. “Second half, get the motivation back up, get a breath of fresh air and came out and hit it on the head.”

Minneapolis City will next play host to St. Croix on Friday, July 15.

“We can’t give up a first half goal,” said VanBenschoten. “We can’t do that and can’t chase the game. It’s so hard and we don’t have the legs and depth to do it… We will fight to the end and I’m really proud of that.”

In NPSL play, the Crows lost to Dakota Fusion at Moorhead on Wednesday 4-1, and will host Joy Athletic on July 9 and are at La Crosse on July 15.

“We just hope to do everything we can and end the season on a win,” said Tume. “Try to do what we can to keep building the momentum that we have and keep the belief in the crowd. Our fans come out and support us all the time so we do it for them.”