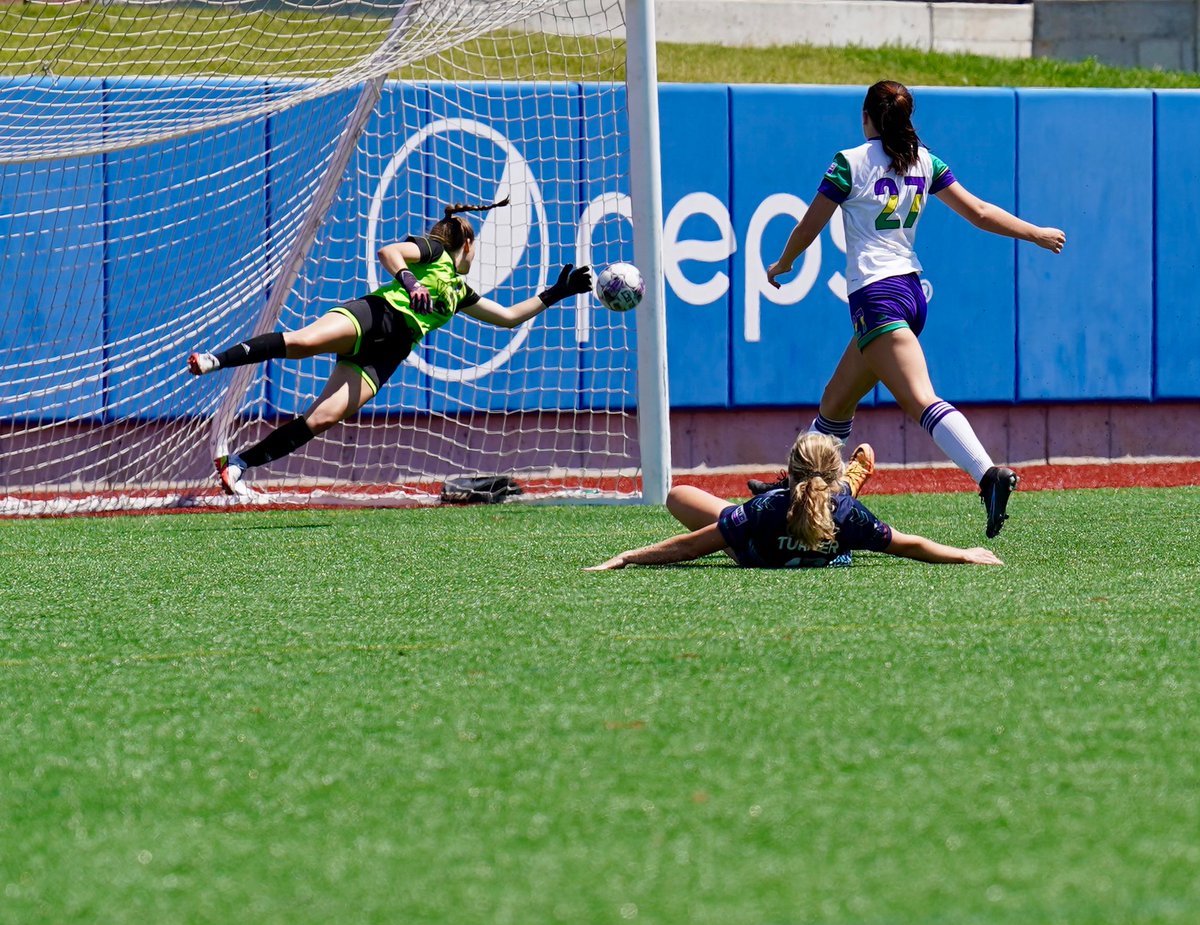 “It’s clear that Green Bay Glory is the most competitive team Aurora have faced this season.”

Both teams also have women founders and women throughout their technical staff and front office. For a USL W League, whose hashtag this first year has been #ForTheW, it is fitting these two women-led clubs start and end their Heartland Division schedules facing each other.

The Thursday, May 26 opener at TCO Stadium that resulted in a 1-1 draw seems long ago. Both MN Aurora and Green Bay Glory have improved since that tentative first game.

On Thursday, the first half ended scoreless despite an octogon: 8 corners, 5 for Aurora and 3 by Glory. Both defenses played well, with Green Bay having to defend more chances.

Head Coach Nicole Lukic drew up a new corner kick play at half time, which resulted in a second-half Langdok put-back for a 0-1 lead.

Morgan Turner took a penalty kick to add to the lead, and Aurora win 2-0. Between Aurora’s Thursday and Saturday games, they went back to Capital Credit Union Park to take in a Green Bay Rockers baseball game.

After playing in soccer-specific venues at Kaw Valley and Chicago Dutch Lions and mostly American football fields, Aurora had the chance to do something New York City FC and Green Bay Glory do regulary: play soccer on a baseball field. The bright white foul lines and base coach boxes show up more visibly than the yellow soccer lines.

I had the chance to talk with two Revontulet supporters that were in Green Bay about the stadium.

MN Aurora community owner Alicia Pedersen had this to say about the stadium: “The stadium was pretty good: didn’t seem like there was a bad seat at all. It was fun being close enough to the field to hear the players shouting at each other the whole time.”

Revontulet’s frequent away supporter Nate Howells had this comparison: “The atmosphere at the stadium was better than any of the other away matches. Instruments and noise makers are encouraged and the pa announcer called on fans to clang cowbells, bang drums, blow whistles, play horns and the fans eagerly complied.”

Howells added this ironic observation with the video board: “At one point a Glory player was laying on the field getting medical attention, and the electronic board changed to announce an upcoming band playing at the stadium: As I Lay Dying.”

Coach Lukic returned to the 3-5-2 for the first time since June 17 at Chicago City SC. GK Taylor Kane gets her second start and sixth appearance. The two forwards Morgan Turner and Kristelle Yewah both went the full 90 minutes and were involved heavily.

The front five overwhelmed Green Bay’s defense early. 42 seconds in, Turner assisted Addison Symonds for the quickest MN Aurora goal in history. Later in the first half, Cat Rapp fed a hungry Morgan Turner who slid-poked the ball past a Green Bay defender and GK Alyssa Stumbaugh. The half ended 0-2 in favor of the visitors.

Early in the second half, Kristelle Yewah plays Turner onside for a nearside finish. Ten minutes later, Morgan Turner pounces on an unfortunate GK Stumbaugh touch to complete her hat trick and putting Aurora in the lead 0-4.

As usual, MN Aurora used all 7 of their subs including Mayu Inokawa at CB and Bayliss Flynn at GK. Green Bay would get a goal back off a set piece, but the mix of starters and backups would yield no more goals.

Minutes after Kristelle Yewah rang the crossbar for no goal, the former Michigan State star would get her first MN Aurora goal. Maya Hansen, subbed in at center mid not striker, passed up to Turner, over to Ruppert, who crossed to Yewah. The passes and the outsole one-touch were an athletic, aesthetic, and emphatic exclamation point on the game and the regular season.

She earned that one. Amazing passing by @MNAuroraFC to set up this one touch volley goal by Kristelle Yewah

Aurora will stay undefeated in the @USLWLeague with a 5-1 lead in the 79th pic.twitter.com/lyMBWZ9hsh

The other two MN Aurora forwards Turner and Hansen both hug Yewah in celebration.

In the end, MN Aurora gets its fastest goal, first hat trick, and first 5-goal game. They win 1-5 away and remain undefeated going into the playoffs.

“Rolling in the Deep” – Roster and Season Review

“It’s just cool to play with people from all over the place. We all come from different backgrounds, different places, but on the field, you wouldn’t be able to tell that. We play so unified, and it’s just super fun.”

Rachel Preston after the game on Thursday, July 7

Minnesota Aurora have depth — not Mariana Trench depth (36,037 ft) but at least the maximum depth of Lake Superior (1,333 ft). All 25 players of their roster in this Heartland Division season saw game time.

“I’m super proud of every player on this team. We’ve asked them to buy into the system, and every single one of them really has, and they’ve been able to contribute. We’ve seen a lot of growth over the last 61 days.”

Coach Nicole Lukic after the game on Saturday, July 9

My roster review from June 29 covers in-DEPTH how each player fits in Aurora’s attack and defense. Some updates to the statistics:

Aurora are stingy in defense with speed, size, and smarts at GK and the back line. The midfield and attacking players understand their defensive roles whether pressing or trapping.

The dynamic and technical play of Cha, Hansen, Nguyen, the three Rapps, and frankly everyone else allow Aurora to pass and possess even in tight spaces.

There were some miscommunications or “not on the same page” moments throughout the year, whether playing out the back or attacking around the box. Overall, the chemistry and communication has steadily improved.

The depth isn’t just at players. They have four coaches that understand each players strengths as well as when and how to use them. They have a full staff of game-day, media, merchandise, etc. With each game, everyone is improving.

After that first draw hosting Green Bay, MN Aurora FC rattled off 11 straight wins. The finish atop the Heartland Division Table regardless of what happens between the 1 postponement between Kaw Valley and Chicago Dutch Lions after the Dutch Lions’ 2 forfeits (count 3-0) to Kaw Valley this weekend.

This Wednesday, July 13, MN Aurora will host their first playoff game at TCO Stadium in Eagan.

Who will they play?
The short answer is “most likely definitely Indy Eleven.”

Similar to Aurora, Indy Eleven are undefeated but with 10 wins and 2 draws. Both teams have dominant goal differentials: 27 for Aurora, 24 for Indy Eleven. Both teams finished well-clear of the 2nd place team.

“We all knew this team was going to be something special even before the season started, but to be one game away from an undefeated regular season is beyond even the loftiest expectations. . . . I can’t wait to welcome the team home for the playoffs and make 6,000 fans seem like 60,000.”

Remember the 7 divisions in the USL W from my Aurora & USL W preview? Me neither. You can review that article here.

The winner of those 7 divisions all qualify for the quarterfinals, plus one wild card. 6 of those division winners are known. All 7 are known now.

Swiss Army Knife Shelby “plays anywhere” Hopeau was subbed out at the start of the second half, after a late first half collision. According to one source, Hopeau’s availability for this Wednesday is uncertain.

Regular roster members Morgan Stone and Eli Rapp were not included in the gameday roster for either game this weekend. A source within the team said that Stone is unlikely to be available, but Eli Rapp should be ready.

“Send My Love (To Your New Supporters Group)” – MN Revontulet

The MN Revontulet has contributed to the fun atmosphere at TCO Stadium. Some traditions come from traditional chants from around the world. Some carried over from MN United / Stars /Thunder such as the scarf twirling on corner kicks or the “Aurora” call/response.

Here are a few of my favorite Revontulet songs and chants [credit to Revontulet’s Stefan Wenc for the lyrics assist]:

I asked Revonutlet drummer and Aurora community owner Mel what she thought of this first year.

She replied, “No one could have predicted how many passionate fans we would have. Everyone is so onboard and supportive of this team.”

When I asked, “Is it the undefeated season?”

“It doesn’t hurt, but it’s also how accessible the team makes themselves to the fans. It’s the fun goal celebrations. The [short] season also adds urgency for people to make sure they are there, and don’t want to miss a minute of it.”

I asked Mel what she likes about away games at the Black Hart?

“We are all there for the same thing: watch our favorite team, through good and not so good live streams. Revontulet is turning into a family, where we spend time talking about how to improve the home matches experience for all the fans, grow the Revontulet membership, give back to the community through Revontulet, and of course singing “Tequila” 6 times today, 5 goals & the win! [Note: everyone cheers “Aurora” not “Tequila” of course.]

Tickets are on sale for USL W playoffs Wednesday July 13. The coaches and players will be on pitch. MN Revontulet will be there in the stands. I will be in the press box. Will you join us at TCO Stadium?