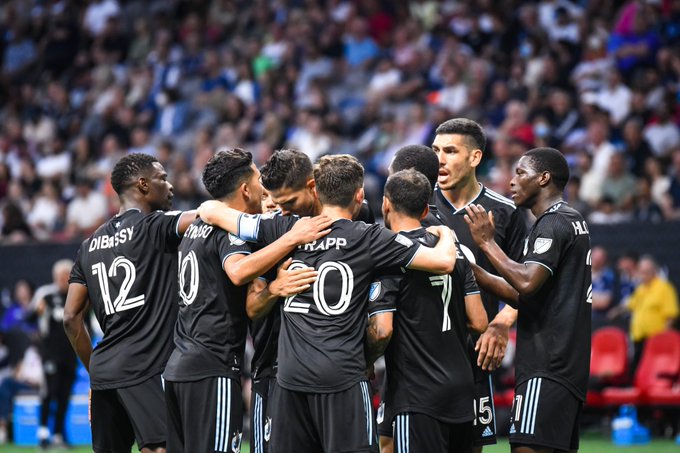 There were many strange things about Minnesota United’s win at Vancouver – the late hour and a three-goal comeback chief among them – but seeing the highlights branded with “HEINEKEN RIVALRY WEEK” was up there. Nobody thinks Minnesota and Vancouver have a rivalry; Vancouver’s fans, who stayed away in droves, sure don’t. But it’s rivalry week, and branding is branding regardless of whether it makes sense.

Wednesday, though, is more like it, as Sporting Kansas City drops into Allianz Field. National TV is coming to town (the game’s on ESPN and ESPN Deportes) and it’s a “featured match,” right up there with El Tráfico and the Hudson River Derby and the Cali Clásico and the Cities That Invented Soccer Derby (Seattle and Portland; that game needs a name).

Some have tried to dub SKC-Minnesota games the “Nicest Rivalry in Sports,” though to be honest, the first time I remember reading that term was in an article detailing a match-ending preseason brawl between the teams from 2014. Adrian Heath always talks about how much respect he has for Peter Vermes; Vermes has pooh-poohed the idea this is even a rivalry.

So, you know, maybe this is neither nice nor a rivalry. But “Nicest Rivalry in Sports,” as untrue as it is, does have a better ring than something contrived like the Midwest Derby or the I-35 Derby or something like that. And I’ll take any MLS rivalries, invented or not, that involve cities that aren’t on the East or West coasts.

The Secret of Soccer

The Loons have scored three goals in each of three consecutive games. They have, in the words of anyone watching from a distance, Figured It Out. Something’s different about Minnesota! They’re back up in the playoff spots, not that far out of third place! Here they come!

Out of curiosity, I grabbed the per-game expected goals numbers from the invaluable American Soccer Analysis. Here is where their xG output for this latest run of games ranks, among their 19 games so far this year:

Of the nine goals scored, xG hardly thought any of them were sure things. A couple of them, according to the MLS website, were down below 1-in-20 chances to go in (Luis Amarilla’s blast against Vancouver, and Emanuel Reynoso’s long-ranger curler against the Galaxy).

Analytically speaking, the secret of soccer is to roll up lots and lots of high-quality chances. On average, over the long run, that’s the way to win soccer games, and that’s why nerds are so focused on expected goals and expected outcomes.

Over the short run, though, this is the secret of soccer: you’re good when your shots go in, and not when they don’t.

They Are Who They Are

The easy thing to say about Sporting Kansas City this year is “they lost striker Alan Pulido, they lost attacking midfielder Gadi Kinda, that’s two of their three designated players, of course they stink.”

There is some truth to that. SKC hasn’t really changed how they play. They still are patient, they still build carefully on offense; the five players that lead their team in both passes and touches are the four defenders and defensive midfielder Remí Walter, as opposed to a team like Minnesota, where Bebelo is leading the squad in both categories.

If you took Reynoso and Amarilla out of the Loons’ attack, their numbers might look a lot like Kansas City’s.

At the same time, though, there’s something else lurking beneath those numbers. For one, their goalkeeping has been abysmally bad. Tim Melia is 36, and some of his gears might be starting to grind; he’s given up six more goals than the xG numbers expect this year, according to FBRef.com, putting SKC into the bottom three in the league in that category.

In a sense, they’re the opposite of Minnesota, in this way; the xG numbers don’t like either team, but Dayne St. Clair is pulling the Loons up, whereas Melia is dragging SKC down.

For another, Sporting has been getting murdered on the counter-attack. American Soccer Analysis tracks “fastbreak” xG, what we’d think of as counter-attacking or otherwise wide-open offensive play, and SKC has the worst shot differential (13-3) and the worst goal differential (-5) of any team in the league in this category. No team has taken fewer shots from fastbreak opportunities; only the LA Galaxy have allowed more.

(Interestingly, the Loons are near the top in this stat; they just don’t get countered that often. They’re ahead of the game 11-4 in shots, and are fifth in the league in expected goal difference – and, strangely, have neither scored nor conceded a “fastbreak” goal this year, according to the numbers.)

14 – The number of paragraphs in this blog that I have already devoted to numbers. You have to be sick of the numbers by now.

The Loons desperately needed a win, with three games to go in 2021, and got it courtesy of Franco Fragapane and an Emanuel Reynoso penalty in a 2-1 win. Also there was this weird thing where SKC subbed in Amadou Dia, who played only four games last year, with eight minutes to go, and two minutes later Dia got a yellow that should have been a red for a horrible foul on Reynoso. SKC fouled Reynoso eight times in the two games he played against them last year. Nicest rivalry in sports? Maybe not.

Remember, the best way to do these predictions is to give 100% weight to the “this is MLS” factor. Think about the most likely outcome, the one that every trend and sign is predicting, then go with the exact opposite. In this case: Sporting KC 3, Minnesota 0.