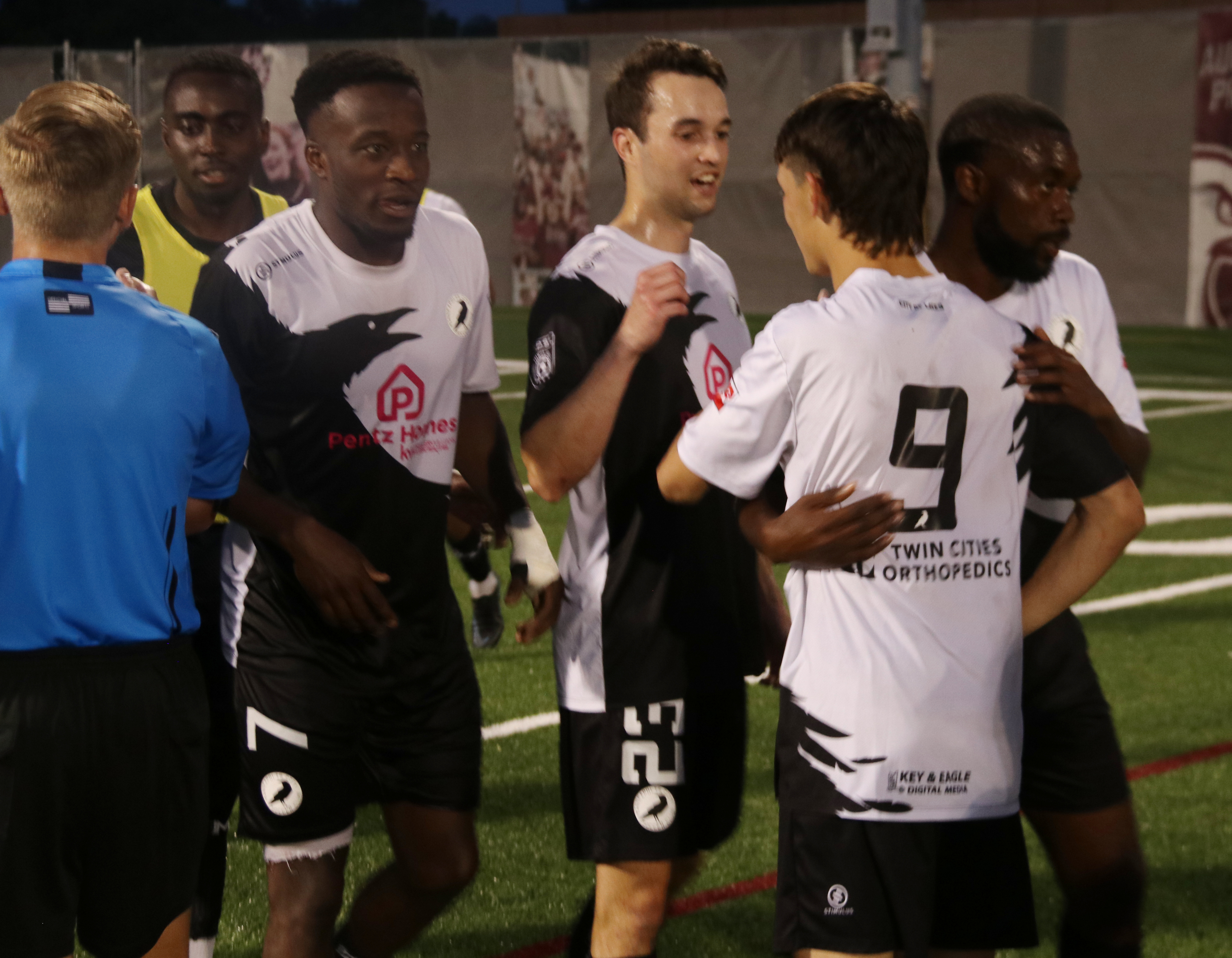 For the entire first half and a few minutes more, it seemed like Minneapolis City SC would end their first USL League Two campaign without a win.

In the 49th minute though, Aidan O’Driscoll’s 35-yard free kick found the net, the lone goal of the Crows’ home victory over St. Croix SC at Edor Nelson Field on Friday night.

Occurring after a foul, O’Driscoll took his shot right in front of the heart of the Citizens supporters’ section, aiming for the far corner of the goal for the score.

“Whip it into the back post and make the goalie work and someone can run onto it or it ends up in the back in the net,” said O’Driscoll. “As soon as I hit it I knew it was going in. Just the way the ball was moving and where it was going.”

O’Driscoll said he has had plenty of experience in youth soccer and at Luther College taking set pieces.

“He scores weird goals like that and I was not anticipating it, but it went in and I lost my mind for a couple seconds which is pretty fun,” he said, adding O’Driscoll contributes a unique element in setpieces. “You never know what he is going to do where he could whip a ball in or keep it on frame… Anybody who takes set pieces you want them to have confidence, and it’s never a matter of confidence for him.”

The well-placed goal was all the Crows needed in a matchup of two of bottom teams in the Deep North Division. The match seemed destined for a scoreless tie in the first half.

The backline anchored by defenders Jonah Garcia, Matt Murakami and others prevented the Legends from getting a lot of shots on goal.

“It was the best performance our back line has had all season,” said VanBenschoten. “Tonight there was no indecisiveness, there was no hesitancy and guys were playing with confidence. They were on the same page and you could tell they took the guesswork out of it.”

Martin Sanchez then was the stopper of anything that did make it past the defense.

“They did a really good job of keeping it at 0 and we grabbed one and were able to hold to onto it,” said O’Driscoll. “All props to the defense they were big time… Martin is a pleasure to play with. I think he is going to go on and play at the highest level.”

The Legends did have their chances late in the second half as a shot by Kolton Prater was deflected and the follow by Victor Gaulmin went high in the 78th minute.

Shortly after defender Jonah Garcia came up with a foot injury. The Crows were without a substitution having used them earlier in the half so they switched to a 4-4-1.

“We were willing to able to absorb pressure,” said Garcia. “I was able to do it for another 10.”

The Crows had a chance to put the game away in the 85th minute as O’Driscoll’s straight on free kick from 30-yards out drifted towards the net and Loic Mesanvi had the entire crowd eager in anticipation on a bicycle kick that did not quite connect.

Shortly after in the 88th minute, Gaulmin took a free kick for St. Croix from nearly the identical spot of O’Driscoll’s goal on the opposite side. The shot was tipped out by Sanchez.

“It’s like having another field player,” said Garcia of Sanchez. “He’s excellent with both feet and can play. It’s huge to have him behind us.

Rather than go into a complete shell, the Crows were able push their attack somewhat in 7 minutes of stoppage time to secure the win.

The first half action took place mostly in the middle of the field. The best chance for the Legends came in the 13th minute as Darley Florvill’s shot went wide. For the Crows, their first chance happened in the 22nd minute as O’Driscoll’s corner kick was headed by Erick Bloom directly to Legends goalkeeper Jack Morris. The Crows then had a few other chances in the second half as they controlled much of the action, including O’Driscoll setting up Jacek Nickowski in the 37th minute for a shot that was deflected or Nickowski shot in the 43rd minute that went long off the free kick.

The scoreless first half was exactly what the Crows needed having fallen behind by first half goals multiple times earlier in the season.

“That was huge for us because most of the season we’ve been chasing a goal,” said Garcia. “Being able to just have a clean sheet first half which is one of our objectives heading into the game.”

The win was certainly a relief for Minneapolis City SC as they finished at 1-9-2, while St. Croix ends their season at 2-8-2.

“It’s never been a matter of if we’re good enough but there were a lot of things we couldn’t control this year,” said VanBenschoten, adding his team continued to compete. “It would be nice if it would have paid off sooner but there is something nice of ending the season this way in front of 100s of people who are about the club even though we haven’t won in USL and that means a lot to us. It’s a great steppingstone for us.”