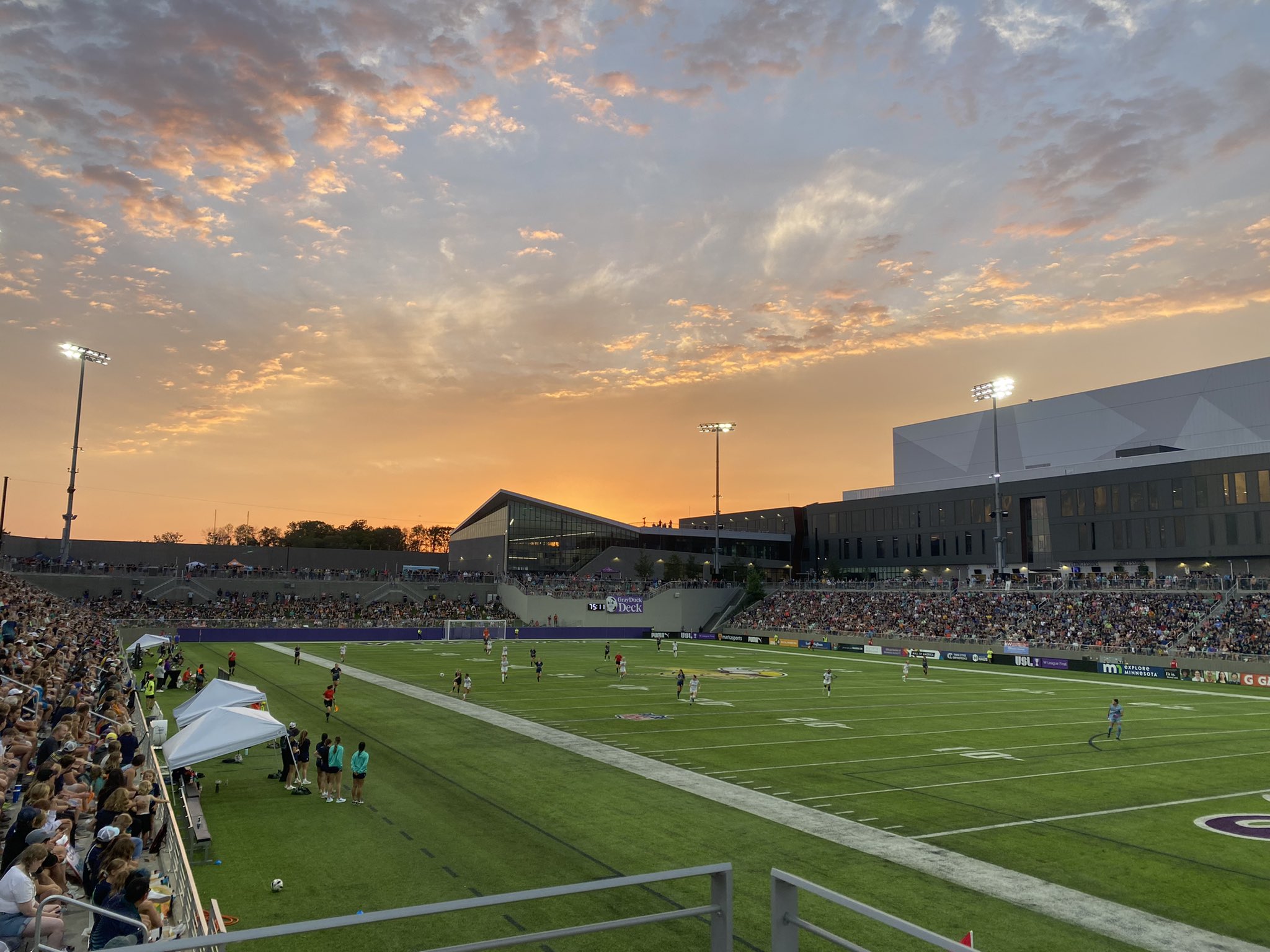 On a weekend where the Northern Lights were visible to some northern Minnesotans, more than 6,400 packed TCO Stadium in Eagan, a little further south, to watch a different kind of show, where the stars weren’t in the sky but on a soccer pitch. Where the only lights were coming from the poles that surrounded the field. Where the spectators didn’t have to lift their eyes, but instead watched on in a similar amazement as a trophy was lifted by the USL W League Champions.

Unfortunately, it wasn’t the team many in attendance hoped to see do the lifting.

Prior to the match, the significance was obvious enough that even the most unaware would understand that this event was a special one, with hundreds of fans tailgating in the parking lot and flooding the gates more than 90 minutes ahead of kickoff.

On Twitter, Osseo native and former middleweight boxing champ Caleb Truax posted a video of he and his daughter on their way to the match. The team received good luck messages on social media from every other professional sports organization in the Twin Cities. Even the often soccer-avert KFAN talked about them on multiple radio shows over the course of the day.

This was a big freakin’ deal, and the match itself delivered, even if the home side didn’t come out on top.

The match up was exactly what you’d want to see in a Championship game: The undefeated team vs. the league’s top individual scorer and goalkeeper. This one had fireworks written all over it.

In the 8th minute, the visitors earned a free kick at the halfway line, which was sent directly to the center of the box. Jaida Nyby got a foot to it and beat Fuller for the opener. The goal was Nyby’s 4th of the season.

“We came out flat, to be honest, for the first 10 minutes,” said Minnesota head coach Nicole Lukic. “For us to get scored on, that kind of woke us up a little bit.”

After keeping the ball mostly in their attacking third but not being able to do much with it, the chances started to come for the hosts.

Aurora nearly equalized in the 17th, as a short corner sent into the box found the head of Abby Ostrem, but the Texan’s header wound up just over the crossbar into the top netting.

Continuing to apply pressure to Tormenta’s backline, the hosts finally broke through, as Addy Symonds found herself in space on the right just beyond the 18-yard box off a throw-in from Mackenzie Langdok. Not gun shy at all, the midfielder let one rip from distance, and there was absolutely nothing USL W-League Golden Glove winner Sydney Martinez could do about it. The strike found the top corner, Symonds’ 3rd goal of the year, and the capacity crowd at TCO erupted.

“Honestly, not much thought went into it,” said Symonds on the goal. “Kenzie was able to get the throw-in off early and I saw the [defender] coming, and I was just like ‘Ok, I have to get this off my foot fast,’ and it ended up going where I wanted it. Great timing and great ball by Kenzie.”

“We have a few players, like Rachel Preston, Cat Rapp, and Addy, who started changing the game for us, changing the momentum,” added Lukic. “To see Addy hit an absolute banger just brought a real smile to everyone’s face. She’s been very close in a lot of other games. So to see her finally put one in like that, it was a special moment for the team, and we’re super proud of her.”

The latter portion of the half saw that end-to-end action continue. Aurora’s backline proved very much up-to-the-task of snuffing out league Golden Boot winner Amy Andrews and this potent Tormenta attack. While the visitors were able to get in or near the box on numerous occasions, specifically on the right-hand side, Ostrem, Kelsey Kaufusi, and the rest of the defense made crucial interventions and headed out several crosses to keep South Georgia at bay.

At halftime, Lukic turned to her not-so-secret weapon in these playoffs, Morgan Turner, bringing her on alongside midfielder Jill Bennett, who sat out the semifinal win over McLean due to a red card suspension.

Despite the changes, the stalemate continued early in the 2nd. Both teams showed quality midfield play to get into dangerous attacking situations, but were unable to fully break through the opposing backline and get that shot on goal.

A corner punch-out and two saves from Sarah Fuller between the 71st and 74th minutes kept the match level. The feeling became more and more apparent that Aurora just needed to muster one more goal to bring it home.

In the 77th minute, Lukic made another switch designed to help get that goal, bringing on a fresh forward in Kristelle Yewah for Maya Hansen.

Following a foul called on a Tormenta player, the visiting bench erupted in disagreement, led by goalkeepers coach Maxi Rocco. Back to back yellow cards were issued, leading to Rocco being sent off in dramatic fashion.

Not wanting to get caught with tired legs on her own backline, Lukic called upon defender Eli Rapp to replace Mariah Nguyen in the 85th minute.

The four minutes of stoppage time saw Tormenta nearly break through on multiple occasions, but great last-ditch defending and the most important save of Fuller’s career brought on extra time.

A rested and revigorated Minnesota side returned to the pitch after the post-regulation/pre-OT break (whatever you want to call it) and retook a hold of the possession and quality chances.

“You try to keep it together the whole game. But a lot’s on the line, and everybody knows that,” said Lukic on the emotions of overtime. “I think maybe that got the best of us a little bit today, is just that extra added pressure. We wanted it really bad and that’s why we love soccer so much.”

Numerous crosses were sent in on the right-hand side but, as had been the case all match long, they were just missing the final touch to bury those chances.

The golden opportunity came just over 20 minutes into the bonus period. Aurora earned a penalty, and Turner stepped up. She ran up to the spot and curled a quality right-footed effort on frame, but Martinez somehow outstretched to make the save and deny multiple rebound opportunities.

“Hats off to [Martinez]. She had an incredible game,” said Lukic. “We definitely had more chances throughout the game, and she kept them in it. That, in my opinion, was the difference.”

Then, the visitors took full advantage of that momentum shift with another breakthrough, once again from Nyby. This time, it was a well-placed effort from 25 yards, and Tormenta were ahead with five minutes to play.

Aurora didn’t go down without a fight, though. They tested the opposing backline and Martinez until the end. But, the final whistle blew and South Georgia Tormenta were crowned 2022 USL W League Champions.

Even through the sting and disappointment of such a close defeat in a Cup Final, this organization’s impact extends far beyond one match and one result, and playing that Final in front of a sold out crowd just more than a year after the concept of the club was first discussed signifies what it means to the Twin Cities, Minnesota, and the whole world of women’s soccer.

That perspective isn’t lost on Lukic.

“That what this is about, right? It sucks to lose, but in the greater scope of things, Minnesota Aurora has changed women’s soccer as a whole. So we have a lot to be proud of.”