Michael Vang on His Ever-Evolving Place in Soccer 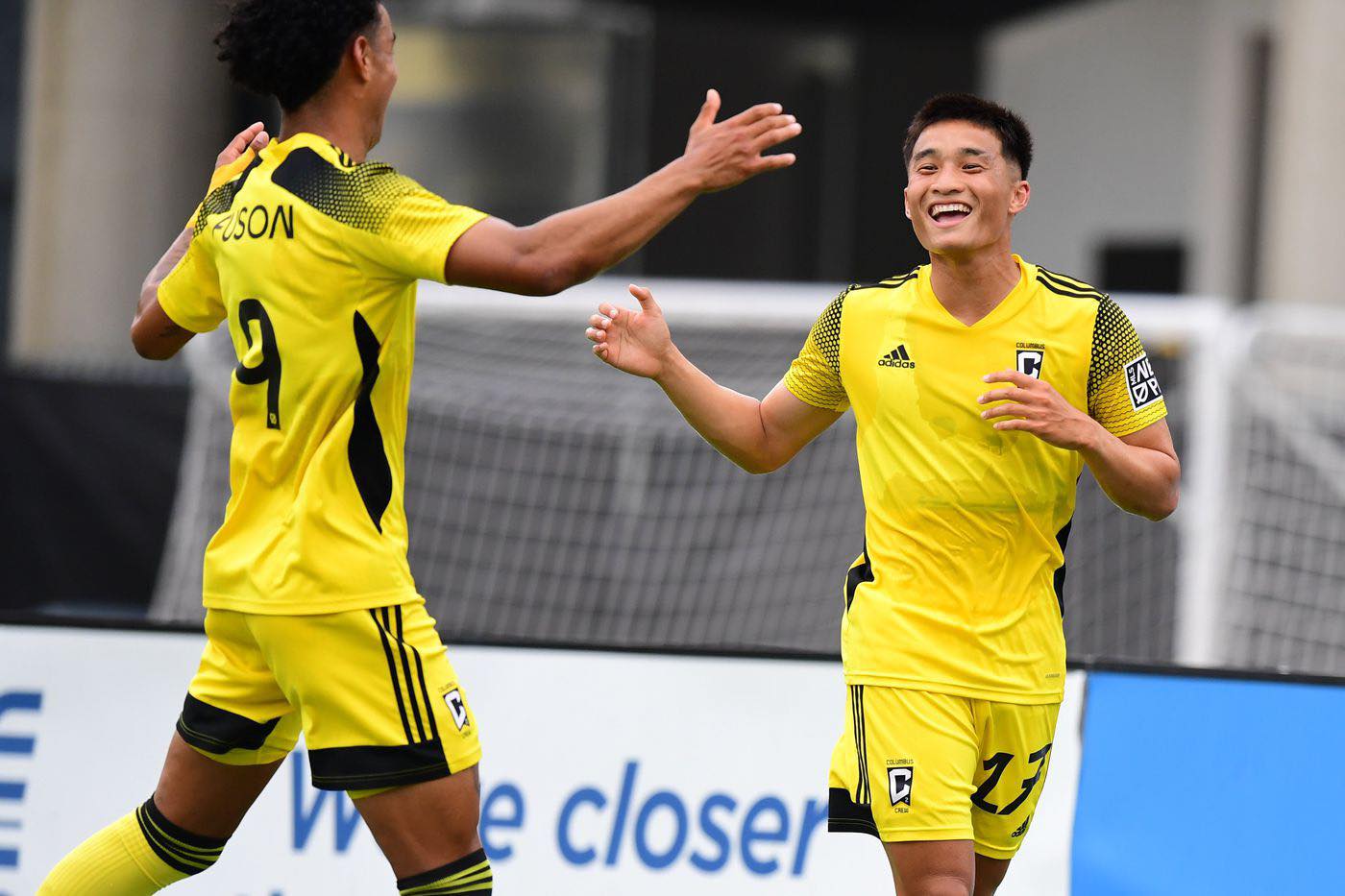 I’ve spent more time than I ever really expected writing about Michael Vang, this being the third article I’ve done on the young prospect making his name across the lower leagues of American soccer. The weight on this man’s shoulder’s, a potential symbol for the hopes of an entire generation of Hmong Americans while navigating his way up the tiers of the beautiful game, is immense. So, what is Michael Vang up to?

When Michael Vang left Forward Madison, his first fully professional club, the talented young player’s trajectory was unclear to many on the outside of his career. The Minnesota-native had made history in 2020 alongside his brother Brian Vang, formerly of the Michigan Stars, becoming what may well be the first professional Hmong soccer players in American history. Michael’s first year with Forward Madison saw him make a big impact, with four goals and two assists in thirteen matches, adding up to about one goal involvement per game.

2021 would prove a quieter year, with Vang missing the sort of minutes he got in 2020 through a year of injuries, a change in coaching staff, and club-wide struggles with form. Departing at the end of that season, Vang needed to find a place where he could write his sequel, one with that could perhaps even out do the “Vang train” hype of 2020. That place would prove to be the Columbus Crew 2, the MLS Next Pro side for the two-time MLS Cup winning Columbus Crew.

Technically on the same level of the footballing pyramid as his last post with Forward Madison in USL League One, Crew 2 provided a different environment on the pitch for Vang. Despite this, Vang would develop a spot on the roster, earning more and more minutes with a Crew 2 side that has consistently been one of MLS Next Pro’s best, with 41 points from 18 matches from a twenty four match regular season.

That’s eleven points ahead of NYCFC II. If the Crew 2 were to remain in their current form, they would take the top seed for the eastern conference playoffs, which would currently see them play Toronto FC II.

As of August 5th, Vang has contributed two goals and one assist for the Columbus Crew 2, appearing in sixteen matches with seven starts. MLS Next Pro statistics also show Vang with 613 minutes played, that’s an average of about 38 minutes per match, and with 85% passing accuracy.

Vang tells Sota Soccer that the move to MLS Next Pro has brought plenty of positives, but has also placed him further from family and of course with a new camp of players to get to know.

“I would say it wasn’t a really [difficult] transition… The facilities that we get over here, the amount of help we get from the staff, the coaches, that we get every single day. We don’t really get something like that at Madison since they’re their own [USL] club, you know the budget is not as big as an MLS side… It’s a lot more helpful than what I was getting at Madison… [As far as challenges go] Just being farther away from home… there were some weekends where I could just drive home from Madison to see my family. I don’t get to do that here because the drive’s like ten to eleven hours now.”

Vang also noted that moving to MLS Next Pro has provided new motivations, with the thin distance between Crew 2 and the Columbus Crew motivating him to perform at his best.

“Playing wise, I mean it’s MLS Next Pro. You want to make the jump to the first team… It’s more demanding for yourself because you know you’re playing for a second team of a first division MLS team. You want to get their attention… If you’re playing in a league where there are a ton of MLS teams, you never know who’s watching. You know, if things don’t go as planned here than the Columbus Crew aren’t the only MLS team around, there’s other options. You never know who’s watching.”

The midfielder also acknowledged the helpful presence of Forward Madison and now Columbus Crew 2 teammate Noah Fuson, who made the move to Ohio at the same time as Vang.

“That’s a big help, knowing someone here. Noah and I, we’ve been together the past two years and our relationship has grown a lot and I think that’s really helpful especially going into a new environment. The both of us just help each other… [and if] soccer isn’t going well, you have each other to get your mind off of it.”

Since arriving on the professional footballing scene, Vang has received a lot of attention as a Hmong footballer, one of several Hmong Americans making strides in the beautiful game that have earned a special spot in recent soccer history.

Vang says that, as his legacy has continued to develop overtime, he’s struggled with some aspects of his position in the community, having to find out more about himself along the way to be better prepared.

“I would say it hasn’t been easy, especially last year with what happened at Madison and just the ups and downs I went through the past year and a half. You know, obviously the first year at Madison was great and that’s where things kind of started to take off but you know, every athlete’s career isn’t always going to be a straight line going up. Knowing that I’m a role model to these young Hmong kids, it’s still a lot of pressure, but also I want to try to show them that it is possible to achieve this goal that they may want and just show them that they have someone that they can look up to. But I would say it hasn’t been an easy year and a half. It’s taken a toll on me for sure, mentally and physically… There are times where I’ve taken time away from social media and just focus on myself.”

Despite the obstacles, Vang remains committed to helping bring about progress and change, particularly by providing an important role model and source of information for young Hmong athletes.

“I still hope to keep carrying this generation, this new generation especially, of talent and I know that in the next three, four years there’s going to be more Hmong kids coming up making that step, that next step [like to] MLS Next Pro. There’s a couple guys playing in the Minnesota United academy that have the ability to make that jump.”

Vang adds that part of the message he wants to impart is that this career isn’t easy, and in fact requires a lot of mental and physical strength.

“I want to also show them that it’s not an easy road to get to this level. I want to show them that there are a lot of ups and downs and times where you think about stopping or quitting but you have to want to keep going… Somehow you find that strength to get out of bed and do it… This lifestyle, it’s not what everyone thinks.”

The realm of Hmong Americans making strides in professional soccer continues to expand, with Michael Vang continuing to pave the legacy he and his brother Brian Vang started in 2020, while California-native and former Sonoma State Seawolf Matthew Lee recently signed a pro-contract at the Faroe Islands’ oldest operating football club, Tvøroyrar Bóltfelag.

Chance Vang, of Colorado but a UW Parkside alum, has also made history for Hmong professional soccer coaches, holding the head coaching job at NJCAA member Northeastern and holding leadership roles at USL League Two club Colorado Rush. Chance Vang has also played with and near the Vang brothers at Saint Paul’s J4 tournament. Combine this with the positive showings of the likes of Lionel Vang in the USL League Two and NPSL, and it’s fair to say this group of talents is at the head of a movement and moment with truly immense promise.

As for the Columbus Crew 2’s Michael Vang, he plans to continue to put the work in with the Crew 2 in MLS Next Pro, with the aim of climbing to the top tier in the near future, whether that keeps him in Ohio, bring him back to the Midwest, or send him to another part of the country.

“I would say, hopefully on a first team roster somewhere in MLS. I wouldn’t know where, I would just hope somewhere. Yeah, whether it’s here or a different team… Just keep working, working on myself. Trying to improve my game every single day and just see what happens.”

Michael Vang continues to defy expectation year after year, the young talent who didn’t play college ball, comes from a community historically absent from professional sports, but still managed to navigate in a world that many of the most anticipated college prospects fail to find their way in.