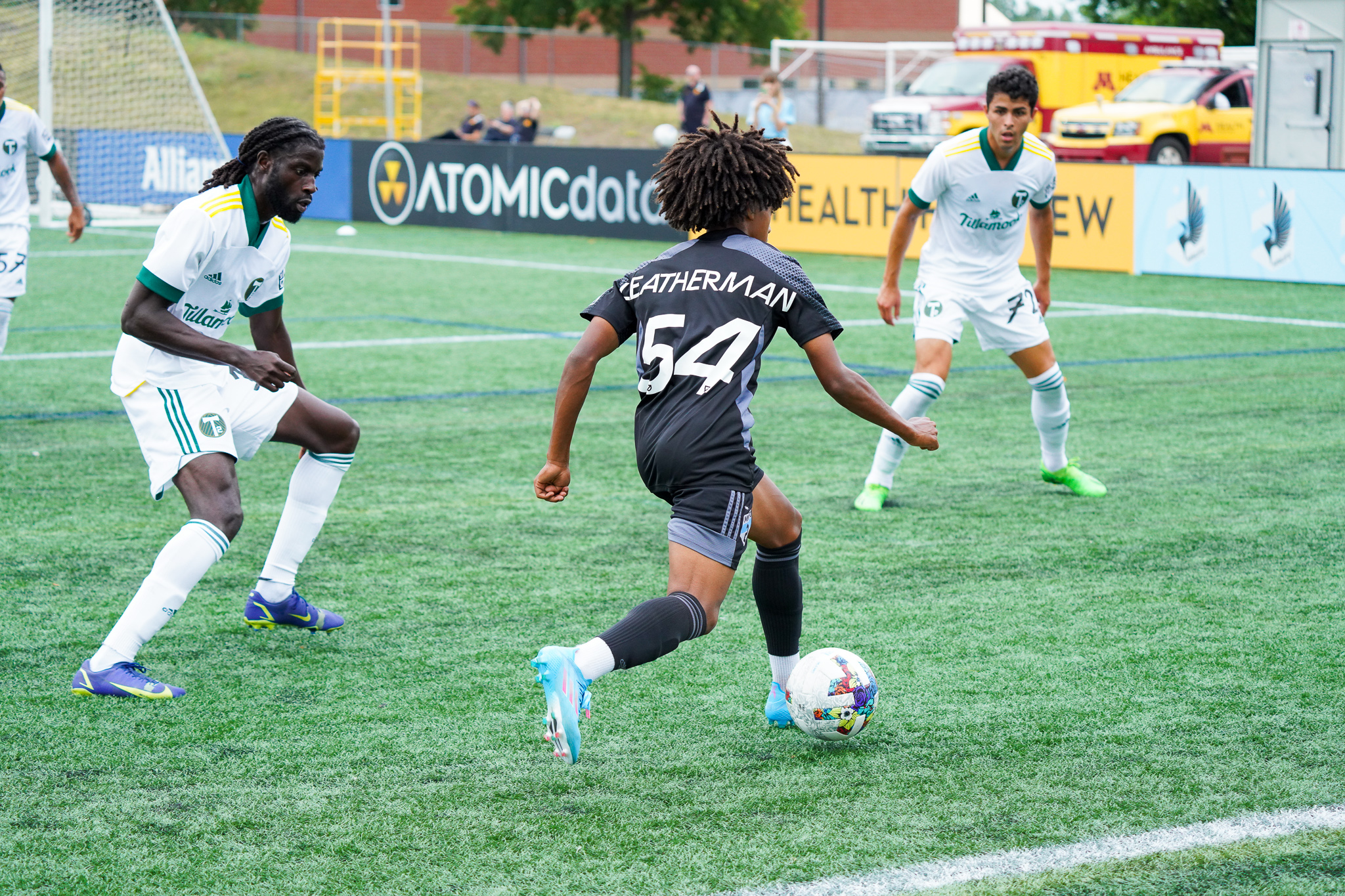 Minnesota United 2 defender Carlos Leatherman — a 17-year-old prospect out of the Loons academy — was selected to participate in the 2022 MLS NEXT ALL STAR game. Leatherman, along with MNUFC2 assistant Coach Jeremy Hall, will take the pitch at the National Sports Center on Wednesday, August 10.

Leatherman has been a standout defender for the Twosies in the right back position this campaign, making 11 starts across 12 appearances. For head coach Cameron Knowles, seeing a young player like Leatherman – a St. Paul native – selected to participate in the match is a credit to the Loons developmental program, his staff, players and Leatherman himself.

Leatherman, who recently verbally committed to Saint Louis University to play Division I soccer come his Freshman year, is a bright prospect who Knowles says “stands out” due to his exemplary workrates and drive as a footballer. Leatherman will look to bring those attributes to the pitch in Saint Louis, where Knowles will be cheering him on.

“For Carlos to have the opportunity to go to a really good school and program that put a lot of guys into the professional ranks over the last year or two is great, you know, and for him to have the experience of playing games and high level training environment, week in week out will only benefit him,” Knowles said.

Despite his lack of size on the pitch, Knowles believes that Leatherman realizes how to use some of his advantages in those situations.

“He wins a lot more balls in the air than you’d expect to. He reads things and times his runs well… he’s finding different ways to solve different problems and I think that’s the value of him.”

The 17-year-old himself is buzzing with excitement ahead of the game, knowing that it’s an opportunity to represent his hometown in front of friends and family.

“It’s a great opportunity to be able to represent this club, my family, who I am and the people I’ve grown up with. It’s great that I’m here. I mean, to be able to play here where they can watch me play live, and I just hope to be able to make them proud.”

It’s been a wild rollercoaster of a season for Leatherman, who made his debut off the bench in the Spring for MNUFC2 to now representing the Loons organization in the MLS NEXT ALL STAR game

“It was really unexpected to be honest and I can only thank the coaches and my teammates who helped me prepare for this stuff but I feel like I’m ready and I’ve made good some good steps to be where I am right now and obviously at the end to be at the MLS All Star MLS next All Star game is this is great,” Leatherman said.

Looking up to the likes of Liverpool’s Trent Alexander Arnold and Manchester City’s Joao Cancelo – Leatherman tries to base his attacking-minded game off some of the world’s greats. However, close to home lies a better mentor and comparison to his game: Loons first-team fullback DJ Taylor.

Leatherman said that Taylor has “taken him under his wing” and has looked to the 24-year-old for advice – on and off the pitch. In addition to Taylor, the likes of Romain Metanire and Kemar Lawrence have been supportive of his rise in the Loons organization.

A bright start to an early career has both fans and Leatherman himself excited, but patience is key when it comes to developing a player, according to Knowles. The MNUFC2 coach believes that Leatherman has what it takes to make it to the “next level,” believing that he is on the right track.

Fans will have the opportunity to see the bright academy product shine in the MLS NEXT ALL STAR game on Wednesday, August 10 at the National Sports Center in Blaine, MN. Kickoff is slated for 11 am CT in a competition of the East vs West.