Marthaler: The Joy of Emanuel Reynoso Can’t Be Overstated 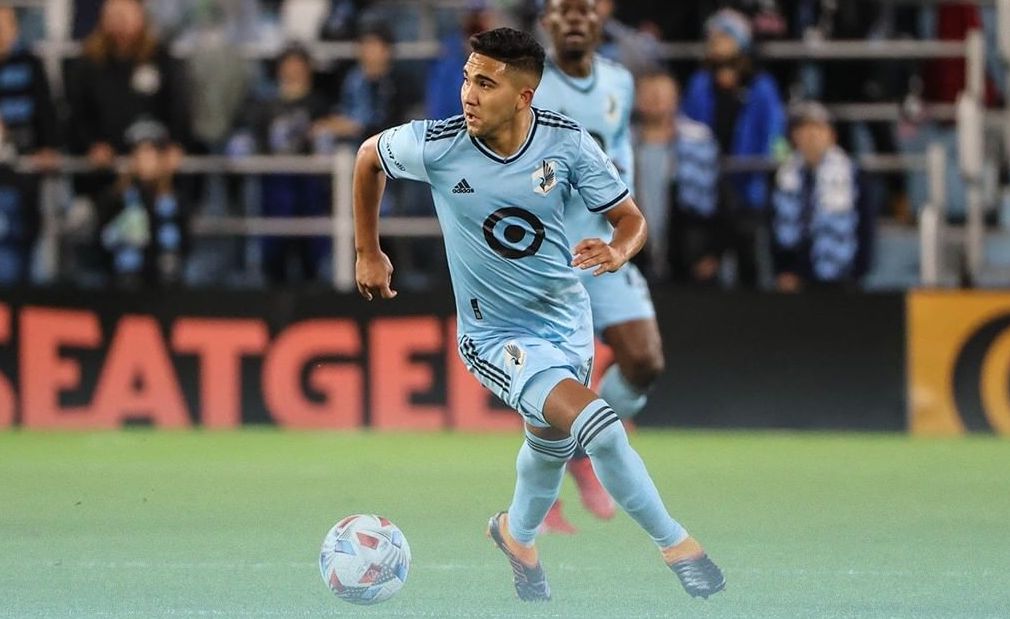 The joy of Emanuel Reynoso is when he’s on the ball.

There was a moment, in the second half of Minnesota’s 2-1 win against Nashville, when Reynoso forgot to pretend that his play was only about creating an offensive chance. In the corner, he stood up, facing Nashville’s Shaq Moore, put his right foot on the ball, and dragged it ten yards backwards while hopping on his left foot. He was waiting for Moore to commit, waiting for the defender to make a lunge at the ball, so that he could put the ball past him – preferably, through his legs – and sweep into the penalty area.

It was enough to drive FS1 color commentator Stu Holden to distraction, to make him – the neutral commentator! – mad enough to call, in not those exact words, for Moore to kick Reynoso up into the air. It wasn’t an offensive move, not really; it was more like a basketball point guard dribbling furiously at the top of the key, waiting for his defender to lean too far one way so that he could cross over and send the defender flying. Strategic, yes, but also designed for punishment.

The joy of Emanuel Reynoso is that he sends defenders the wrong way for the entire game.

He seems to live for those moments, those chances to put the ball past a defender. He is conserving himself for it. By the second half, you’ll sometimes see him walking at right angles to the play, wandering with his head down back to his position near the halfway line, entirely unconcerned with a nearby opponent that’s in possession. If he’s lost the ball and missed the chance to win it back, his work is done, and it’s time to reset.

And yet, on a minute-by-minute basis, there may be no player in MLS who is more involved than Reynoso. He’s sixth in MLS in touches. He’s third in fouls suffered, and sixth in fouls committed. He’s tied for third in nutmegs, and he’s head and shoulders above any other player in both dribbles attempted and dribbles completed; he’s dribbled past 93 players this year, 25 more than anybody else.

Trying to describe his position is even difficult. The traditional portrait of a number 10, a playmaker, conjures an image of calm amidst chaos, the eye of a swirling storm. That is absolutely not Reynoso. Not for him to pull the strings or spread the ball wide from the center circle, Reynoso’s play is much more direct; get the ball, beat the defender. Smash, not dance.

The Loons play a counter-attacking game, but it’s different than the counter-attack games you’re used to seeing. It’s not about the high press or the counter-press. It’s not just kick and run. It’s not a virtuoso waltz down the field; it’s almost violent. Make a defensive stop, get the ball to Reynoso, let him beat a player, and now the avalanche is on. Franco Fragapane, Luis Amarilla, and Bongokuhle Hlongwane are all running downhill, Reynoso has a defender in his wake, and now it looks like the four Loons are about to form a flying wedge and try to simply stuff the ball into the net.

But it all begins with Reynoso. Wherever he gets the ball, at the edge of his own penalty area or in the opponent’s half, he’s going to try to beat a defender. He’s not so much a number 10 as he is a one-man midfield, tasked with turning defense into offense and then turning offense into scoring chances.

The joy of Emanuel Reynoso is that this shouldn’t really be a legitimate strategy. The league should have him figured out by now. “Give it to Rey and let him dribble through the defense” should not work.

And yet it works. Against good defenses and bad, against solid defensive midfields and porous ones, even against the Liga MX All-Stars, Reynoso keeps doing the same things. He drags defenders the wrong way. He runs at them and makes them turn the opposite way that they should turn. He is a master of la pausa, of holding the ball for a second longer while an attacking teammate gets into the right position, of dragging a defender a yard in one direction so that the space on the other side opens up.

Let’s watch Minnesota’s first goal against Nashville. Watch where Reynoso is and where Franco Fragapane is when the ball first lands at Reynoso’s feet. He has the opportunity to send the ball wide right away, into Fragapane’s path – but he doesn’t take it, because it’s not the right time, because Walker Zimmerman will be in position to cut off Fragapane. Instead, he jumps around one defender, not so much to beat the defender but to wait. He waits for Luis Amarilla to run between the center backs and open more space on the left, and only then sends the ball to Fragapane, who now has an open lane outside Zimmerman, and who scores.

Let’s watch Minnesota’s second goal against Nashville. When Reynoso gets the ball, things are hopeless. Amarilla and Hlongwane are in front of Reynoso, but neither of them is anywhere near a dangerous area against Nashville’s back four. None of Minnesota’s midfielders are on the wrong side of Nashville’s second bank of four. Even after Reynoso beats Shaq Moore and Moore falls down, things are only marginally less hopeless; Amarilla and Hlongwane are nowhere, and Alan Benítez is forty yards from the goal and sixty yards away.

But what Reynoso sees is that he only needs to wait, that Joseph Rosales – who started his run inside his own half – is going to have a step on Moore, that Reynoso can draw a midfielder Dax McCarty in while he lets Rosales run inside the right back. He has to let the ball run another beat, long enough for McCarty to fly by and turn his body away from Rosales’s dash. The crack in the defense is there, but it can only be exploited at the proper moment. Too soon, and both McCarty and Zimmerman are in position to cover Rosales. Too late, and Moore will be back in the play.

So he waits. The ball runs ten, fifteen, twenty yards without a touch. McCarty flies by and turns back towards Reynoso. Zimmerman stops his retreat and faces Reynoso. And in that same split second, Reynoso flips the ball with the outside of his left boot, outside McCarty but inside Moore, right to where only Rosales – still sprinting – can get it, and cross it, and eventually find Benítez to score.

There are things in soccer that are as beautiful as la pausa, but I submit to you that there are none that are more beautiful.

And that is the joy of Emanuel Reynoso.