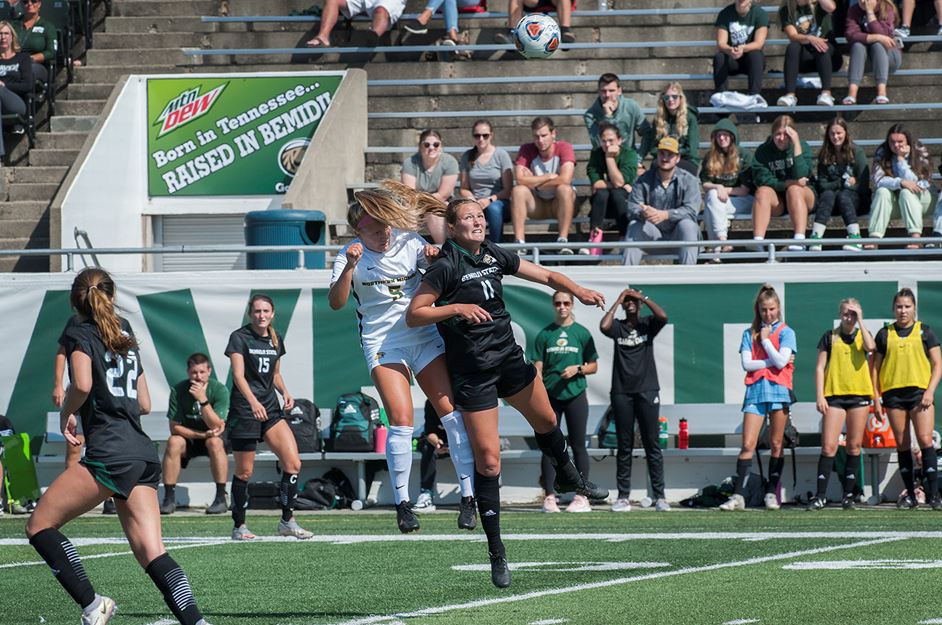 With the initial blitz of non-conference play concluding for much of college soccer, including the NSIC, it’s a good time to check in with and see how Minnesota’s vast range of participants look when we combine preseason expectations with some initial evidence on the pitch.

While these matches are important, it’s always good to take how they impact the conference season with the knowledge that every team’s season starts with a wide range of factors that tend to shift by the time conference play kicks off. From roster turnover to the nature of what sort of teams a school ends up playing to kick off the year, there’s plenty to read into about these games and plenty of conclusions we should avoid diving too deep into.

It’s beyond well known that Bemidji, the 2021 regular season champs, are a team to watch this season, and most seasons. Their non-conference run started with a 3-0 loss to NCAA D1 school South Dakota State. The loss, while a bit steep, was the result of a sense of inter-division bravery Bemidji has well earned through matchups with D1 schools. That loss was followed by matches against two Michigan sides that eventually played most of the NSIC in non-conference play. Bemidji drew Northern Michigan in a wild 3-3 draw before beating Michigan Tech 1-0 to accumulate a 1-1-1 record.

This initial sample size leaves us with a reassurance that Bemidji State are hungry as ever to test their limits, but also can then collect themselves and put up some good performances against their DII compatriots. While they’ll likely want to avoid more 3-3 draws, this run leaves little doubt in my mind that we see Bemidji challenge the NSIC as per usual.

While their northern neighbors may hold plenty of the hype, Minnesota State has plenty to be hyped about in Mankato. They started non-conference play with a 3-1 win over Missouri Southern before losing 1-0 to Central Oklahoma and then beating #1 ranked Grand Valley State 1-0, facing DII opposition from across the nation.

Collecting two wins while scoring four goals, conceding just three goals and adding a one clean sheet to the mix is a great way to kick things off for Mavericks, reinforcing the momentum that continues to surround the 2021 NSIC tournament winners. It’s all about maintaining momentum then for Mankato, who will host Wayne State and Augustana to open NSIC play before traveling to Bemijidi for a big matchup.

Positive Moments for Some

While Winona’s extensive womens soccer trophy cabinet of eleven regular season titles and six tournament titles may have ceased additions since 2011, the Warriors have started the 2022 Fall season well, with a series of good results before the conference action begins.

It started with a 3-0 win over Nebraska-Kearney, followed by a 4-2 win over East Central and a 0-1 loss to UW Parkside. Two wins, a share of goals, and a clean sheet is something to celebrate from the first three matches of the season. Now it becomes a matter of translating that form into conference play and finding ways to upset the current order of the NSIC. At the very least, it’s a reminder that Winona State should be taken plenty serious this season.

Southwest did not have a phenomenal start to their season, ending with three consecutive draws. However, it’s a three match burst that leaves some interesting questions to be pondered. The matches started with a 2-2 draw with East Central, then 0-0 draws against Nebraska-Kearney and Missouri Western State.

While going through this non-conference run without a win won’t feel like cause for celebration, avoiding defeat across three matches while earning two clean sheets certainly doesn’t seem like a disappointing place to be. Whether this run of form translates well into NSIC play is the obvious question, but the fact Southwestern Minnesota State have a bit of data on their side while being far from favorites for a big season is interesting at the very least.

St. Cloud State started their non-conference season with a pair of losses to Michigan opposition, losing 2-0 to both Northern Michigan and Michigan Tech. It’s a run that leaves much to be desired, though the results are also respectable losses. The big injection of positivity for this group is that they followed those losses with a big 4-1 non-conference win over UMD.

With the reminder that they can lay down goals against teams within the NSIC, St. Cloud State will need to focus on the form they found last week and find goals against the rest of the NSIC’s usual struggling sides.

Who Needs Some Work

The Bulldogs started the season on a high note with a well-attended 2-1 win over Michigan Tech, but their form soon slowed with a 3-0 loss to Northern Michigan and a 4-1 loss to St. Cloud State, leaving it hard to determine what sort of UMD side will be taking the pitch in conference play.

UMD have, of course, had some difficult seasons as of late and aren’t especially expected to challenge the usual powers this season. That said, if the Bulldogs can figure out how to parce the 2-1 wins from the 4-1 losses, Duluth could still find an exciting place in the NSIC.

Concordia-St. Paul has had a share of success in their recent history, but this non-conference start to the season has reflected that a tough season may lay ahead for the 2019 conference regular season champions.

The season started with a 1-1 draw against Rockhurst, then a 1-0 loss to McKendree and a 2-0 loss to UW Parkside. While it’s not a clean sweep of losses, the 0-2-1 run leaves much to be desired and plenty of work to be done. Concordia-St. Paul was not blown out in any of these games, so total negativity is far from necessary, but close losses can cause plenty of issues.

Crookston started the season with a good 2-1 win over Waldorf to kick things off, but a 1-0 loss to Michigan Tech would forshadow a steep 6-0 loss to Northern Michigan to end the initial non-conference run on a tough note. Crookston start the season hosting Moorhead, which may provide the chance to get a good result and find some direction in NSIC despite the Northern Michigan result.

With one significant loss and a cancelled match in hand, it’s hard to think Moorhead will be at an advantageous position this season to shake things up.