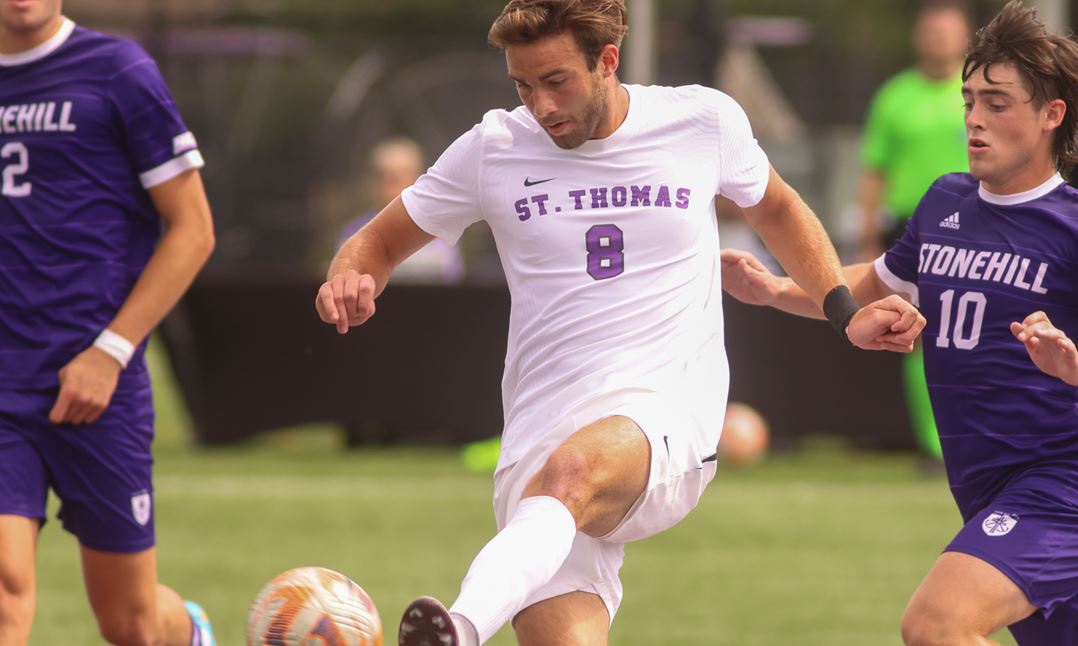 The University of St. Thomas headed into their home opener having lost three of their first four games, 1-3, 1-4, and 0-5 respectively. So while today’s 0-1 loss against the Stonehill Skyhawks isn’t what the Tommies were looking for, there’s always a bright side.

St. Thomas seemed to be the better side for most of the game. They maintained a majority of the possession, found numerous chances, and kept Stonehill from gaining any sort of cohesive attack. Every time that the Skyhawks managed to get forward into a dangerous position, the Tommies were there to win the ball from there and launch one of their signature counter-attacks.

The problem, however, was that St. Thomas wasn’t able to finish any of their chances. Counter-attacks were ended by offsides calls, crosses soared over heads, and their eleven corner-kicks never even seemed to faze Stonehill keeper Ryan Coutu. Eleven. And the most dangerous was one that bounced around in the box before the Tommies received one of their six offsides calls.

But it wasn’t all bad. St. Thomas had many passages of play that saw freshmen Jorge Pacheco and Carver Tierney combine with both each other and other players on the field to wriggle out various chances. Pacheco often found himself out on the wing in one-on-one situations, and the Mexico City native was more than happy to feint one way, and then dart the other, as he made space for himself to shoot or cross the ball. Tierney was a menace off of the ball, making runs that pulled defenders into space, freeing his teammates to run wild in the midfield. That coupled with his team leading four shots makes him one to watch in the coming games.

Other notable performances include those of Charlie Holton and Wes Lorrens. Holton, an offensive and defensive catch-all, was all over the field, stopping Skyhawk counter-attacks dead in their tracks and instigating numerous offensive chances for the Tommies. Lorrens was another that helped St. Thomas control the tempo of the game, flying throughout the midfield and rising higher than any other player on the field on numerous occasions to win aerial duels.

Unfortunately for the Tommies, the scoreline will only be affected by Jacob Woznicki’s howler of goal against the run of play. Stonehill’s lone shot of the second half proved to be the difference maker as Woznicki worked himself free just outside of the box and launched it into the bottom corner of the goal, past the outstretched arms of Tucker Mann.

Speaking of unfortunate for the Tommies, Tucker Mann picked up a red card in the 90th minute of the game. St. Thomas had loaded all eleven of their players into the box for a free kick, and a clearance from the Skyhawks meant the teams were off to the races. Mann was second to the ball, and his foul on the Stonehill player was enough for the referee to give a straight red card, making Mann unavailable for St. Thomas’ next game on the 16th of October against Chicago State.

This could provide freshman Tony Favorite a chance to start for the Tommies, having come on for Mann for the final twenty seconds of the game. Favorite, Pacheco, and Tierney will look to turn St. Thomas’ season around, and after today’s game, I certainly wouldn’t put it by them to do so.