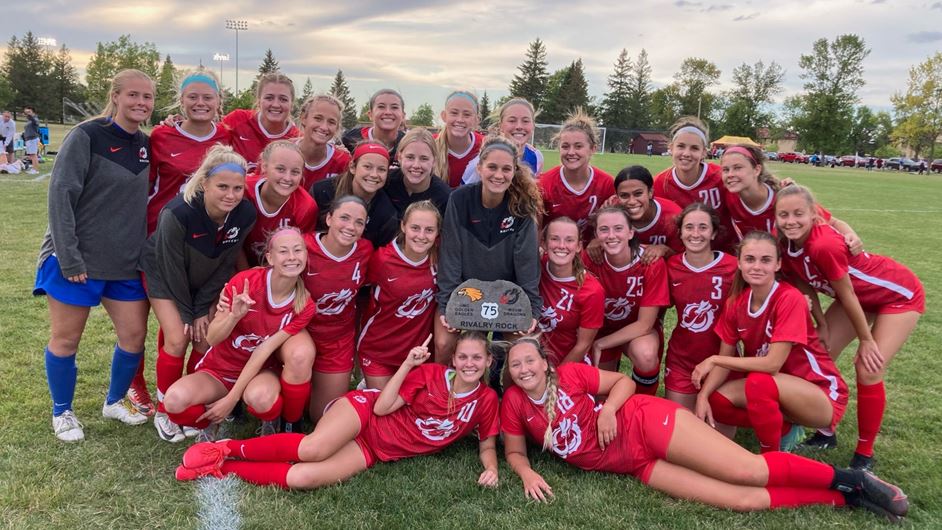 We are 3 weeks into the ’22 season and some of the Northern Sun players decided to make a few headlines for you. In the past two weeks we saw Mankato State travel to Michigan to beat the #1 team in the country, Grand Valley State. We saw the UMD Bulldogs travel 16 hours round trip to snag a huge upset at Minot, and Moorhead and Crookston battle for the Highway 75 Rivalry Rock (the Kopietz Cup?). Get caught up on the past few weeks because looking forward we’ve got a doozy of a matchup  as Bemidji and Mankato face off in an early season heat check.

In the last NSIC in MN edition, I spotlighted this match as a huge non conference challenge for Mankato. Challenge accepted! Mankato travelled to Allendale Michigan on September 4th and knocked off National #1 Grand Valley State 1-0. Credit must go to the Maverick defense for shutting out Grand Valley at home, starting in the back with Mackenzie Rath. The winning goal came from Jenny Vetter on a pass from Olivia Thoen. The Mavs clearly left the game with confidence as they proceeded to start the NSIC season off with a 6-0 win over Wayne State and an impressive 4-2 win over Augustana at the Pitch in Mankato. For their efforts Mankato moved up to #11 in the National Coaches Poll.

Allow us to introduce you to the Highway 75 Rivalry Rock. We don’t have enough rivalry trophies in College Soccer, but we cannot blame Moorhead and Crookston for that. Last week they played for the Highway 75 Rivalry Rock, which is a legitimately cool trophy seen with this years champs above^. Last year the Golden Eagles won a 1-0 nailbiter and this year the Dragons took it back in similar fashion. Senior Callyn Johnson scored the games only goal on a penalty in the 32nd minute. Freshmen Keeper Quinn Carter had 7 saves and her first collegiate shutout in goal for the Dragons. Hats off to Moorhead Head Coach Christie Kopietz, who was a hall of fame player at Crookston before having a long run as Head Coach at Moorhead. She takes the “Kopietz” Cup this year. Moorhead took some momentum into their next game and fought a tough 1-0 loss at Bemidji State, so let’s see if they can take some momentum into NSIC games this week at home vs. Augustana and Wayne State.

How much do you remember about 2013? Some UMD Bulldogs who were in middle school then just wiped out a losing streak that had existed for nearly 10 years. in ’21 Minot was living at the top of the NSIC table, while UMD won just 3 conference games. We have to credit a great defensive effort by Duluth, who held Minot back until they found their one chance. Sarah Strange took the only goal that UMD would need in the 64th minute after a corner kick and the Bulldogs took a huge bounceback win after a tough 1-4 loss at St Cloud. UMD followed that up with a solid draw at Mary in Bismark to cap a 4 point North Dakota road trip. They’ve got two winnable games against Upper Iowa and Winona at home this weekend.

Last week we sat down with BSU scoring chart climber Sara Wendt! We talked about their NCAA run last year, how BSU was her only (!?) scholarship offer, and where she likes playing in the NSIC.

Bemidji State vs Mankato State
​Friday, September 16, 3pm
A huge early NSIC season matchup between the two NCAA Tourney teams from last year. Mankato is coming off of 3 big wins, while BSU has been winning but in closer fashion than you might expect. They’ll be up for this one. Tune in to Equal Time for coverage of this game on Friday, and use the link below for a free stream of the game
STREAM: https://nsicnetwork.com/

UMD vs Winona State
Sunday, September 18, 1pm
UMD is at home following an impressive 4 point swing through North Dakota. Winona is off to a hot start and still unbeaten in NSIC play. Winona could start a real run with an away win, UMD could signal a new type of season with a strong weekend at home.
STREAM: https://nsicnetwork.com/

SW MN State vs St Cloud State
Friday, September 23, 3pm
Both squads went winless in their opening weekend of Conference games, but each team’s goal is likely still a postseason birth, meaning a top 8 finish. Mid table matchups like this could go a long way to determining if either of these teams can make the Conference tourney.
STREAM: https://nsicnetwork.com/&nbsp;