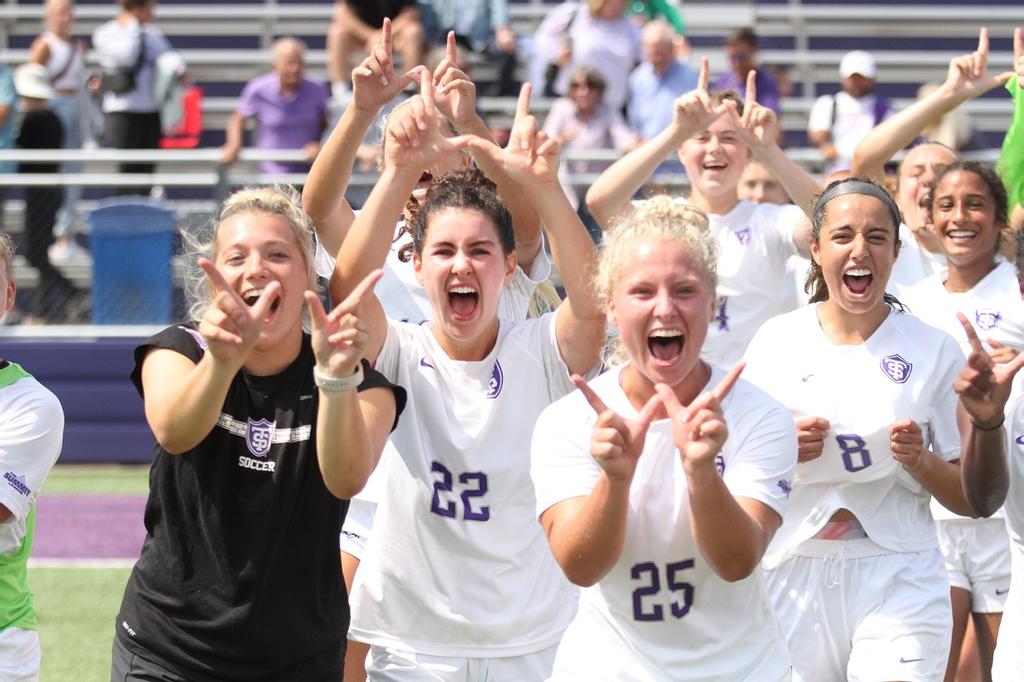 In their first season as a DI program last fall, St Thomas didn’t sit back and park the bus. They played an attacking brand of soccer that was sure to cost them games but which may also pay dividends long-term. Now, as they wrap up their non-conference schedule in the second ever DI campaign, St Thomas looks battle tested and ready to give Summit League rivals legitimate headaches as a no-regrets spoiler (they are unable to qualify for conference tournament play while still in their probationary period). Here are some key takeaways from the Tommies 2022 season so far.

Of course, as a spectator there’s the inevitable natural selection of your favorite players. I could be here all day to talk about every player I’ve watched contribute to this team, but I don’t think you (or I) have the attention span for that. (Maybe someday though… I’ll have to see).

Camryn Rintoul has been nothing but an absolute joy to watch, and I’m grateful that I was able to tell her in the show (mainly) Matt and I hosted earlier this week. Her absolute dominance inside the midfield is phenomenal, and watching her build confidence in both herself, and her play is just an amazing process to watch. Looking back to all the notes I’ve taken from previous games, Camryn was the first player I took notes on, and even caught my eye, which I think is pretty hilarious since my focus on her was basically foretold from the very beginning.

During our talk, Camryn talked a little about coming into this season with more pressure and expectations on her shoulders because she both had a year already under her belt, and because she was now considered an upperclassman to her new freshman teammates. Knowing this, she’s stepped up, and (in my opinion) ultimately has shaped the way this team plays. Anywhere the ball is, Rintoul isn’t too far behind. It’s one of the reasons she continues to be one of my favorite players on this team.

Furthermore, I think we genuinely just have to talk about Lissa Mizutani. She was one of the first players that caught my eye at the first game I went to go spectate, particularly because of the way she handles defending. She’s got amazing skill, but also has the potential to defend anything that comes her way. Not to mention the absolute leg she has got on her.

In the Tommies most recent game against Wyoming, I posted a story with a video of the free kick she had taken from inside their final third. And let me tell you, it was absolutely astonishing. She launched that ball all the way past half into the box, almost as if the team was meant to treat it like a corner kick. I mean, c’mon who the hell else can do that?! But not only that, Mizutani (as a defender) can also contribute to the attack, which is something you don’t see as often as you think. One of my favorite things that I’ve seen from her, is her ability to see the field in its widest form. She’s the one who receives the ball in the back, listens to her midfield, and constantly switches the ball. I personally think it’s one of the best things about her style of play.

Next on my list is Arianna Sanchez, or more infamously known as Chez to the rest of the team. One of the things Chez is most known for, is her speed on the wing. Arianna is probably one of the fastest players on this team, and when she can use it, you best believe she will.

One thing that really stands out about her, is that she’s not afraid to take that risk. She never seems to be worried about wether or not she’ll win that 1v1 against that wing defender on the opposing team, but more so focused on if she can do it, and what she does if she wins or loses. If she wins, heck that’s great! She’ll keep going and shoot for goal. If she doesn’t, not a problem, she’ll track back and pick up after herself.

Chez is also an amazing outlet and support for her center mids. There have been countless of situations where is seems to get sticky in the center mid, but Sanchez comes off her line and helps wherever she can, however she can. Arianna never fails to leave it all out on the field, and try her hardest whenever she sets foot on the grass (or turf), its what makes her unique and a great team player.

Now of course last (but certainly not least), I had to talk about our lovely Mariah Nyugen. I was so excited when I had heard about her transfer to St. Thomas. While I was working the Minnesota Aurora games, I got to watch her play every once in a while, but I never got to fully invest myself in analyzing her style of play until now.

Mariah is one of the fiercest players I’ve ever seen. She could care less if you can see over the top of her head, what she wants, she’ll do her best to get. Being physical with players that are bigger than her has never stopped her, and that’s one of the things that makes her so entertaining to watch.

Besides being physical, Mariah has one of the most creative minds I’ve ever seen. She can create, but she’s also ambitious enough to want to score her own goals. In their exhibition game vs. St. Cloud State, I remember seeing the corner kick of a lifetime. Watching Mariah put her head on that ball was perhaps one of the biggest things that made me so excited to continue covering St. Thomas (more than I was already).

(Side Note: She also recognized me after a game and said hi to me. biggest. fangirl. moment. ever. I had never felt so famous. Plus, her dad is an amazing human being. He always says hi to me when I come to watch. GAH!)

When you look at the St Thomas rotation on paper via a random box score, it might appear they go a bit deeper than other teams into their bench – nothing too crazy. When you watch the team in person, you notice it’s much more unique than that.

While most teams try to substitute players on and off with enough time for the squad to settle into a new rhythm, St Thomas is virtually always taking players on and off – giving the feel of the game a layer of chaos at almost every moment. Head Coach Sheila McGill has said (watch her discuss in the show below) that subbing strategy is to both allow maximum effort defensively and to give more players the chance to see the field. But those two reasons only speak to the amount of subs used. The timing and cadence of it is what’s truly unique.

Next time you tune into the Tommies you won’t help but notice it. Trust us. Especially if you watch the game in person.

Playing on the front foot (Matt)

In a college soccer landscape where it feels like maybe a third of all DI programs strategically sit back and hope for a low scoring result they can grit out, it continues to be refreshing to watch teams that throw forward and play on the front foot. Even when it means risking a counter attack or exposing the backline, teams that play to win (vs not to lose) are just more fun to watch.

Coach Sheila McGill has said that she knew from the beginning that the team would never park the bus and sit back. Apart from it being a really boring style (for fans AND her) to watch and for the players to play, she also knew that if the vision for the Tommies in the long run was to be a highly competitive program then the growth to that point might as well start right away.

Defender Audrey Vidmar has described the style of play as requiring lots of focus and discipline from the whole team. With forwards pressing a bit higher, midfielders are required to follow suit or else they’ll create a gap between the forwards and mids that the opponent can exploit. And even if the midfielders shift up as unit with the attackers, the defense then has to follow suit in a coordinated and connected way. It’s the kind of style that can keep opponents on their feet and force them to never feel entirely comfortable – even if it risks being exposed yourself.

The true test will be how the style holds up against the top dogs of the Summit League like South Dakota State and Denver. Our money is on St Thomas being able to succeed at it just enough to find a spot in the middle of the table – a huge accomplishment if they’re able to pull it off.

It’s easy to get a result when things are going well for you – when the team is clicking and you over power the opponent from the first whistle. It’s harder to right the ship when things, for whatever or however many reasons, just aren’t going your way.

Two times, in particular, during non-conference play St Thomas lived through an opening stretch where they were getting dramatically outplayed – only to come away with key points. Against Idaho, the Tomcats were being out possessed to almost an absurd degree. Idaho looked as crisp to start the game as any team I’ve seen this fall. It looked like St Thomas was going to get blown out. Then, as they kept battling, the game just turned. After 15 minutes of composed, disciplined possession, Idaho fell back to earth and the teams played to a fairly even handed draw.

On the road against Northern Iowa, St Thomas gave up 3-5 truly dangerous chances all within the first ten minutes or so. The Panthers of UNI were showing out for senior day and only through some brilliance from UST keeper Annie Bantner where the Tommies were able to keep things level at 0-0 through that stretch. And then, they brought the heat – winning 3-0 in a convincing and dominating performance.

FINAL | ST THOMAS 3-0 UNI@UST_WomenSoccer continues to show that they are making that next step from start-up DI. @Balfour_Alex, @brantner_abby, Huber with the goals. Second game in a row weathering a super hot start, settling in, getting a result. Impressive for a young team! pic.twitter.com/RsLibMV7m5

No, Idaho and UNI aren’t big time, big name programs necessarily. No they aren’t making deep runs in the NCAA Tournament. But if you watch college soccer consistently you know when games are going the wrong way. And it is not common – even when teams are fairly evenly matched – for a squad to turn the tide of a game that is going so strongly against them. It just isn’t. And when it happens, you should take note. Because that squad has some grit and resilience in their bag.

It’s hard to take too much away from early season stats, especially when teams have played such varying levels of schedules in terms of opponents. But here are three stats to keep an eye on heading into Summit League play.