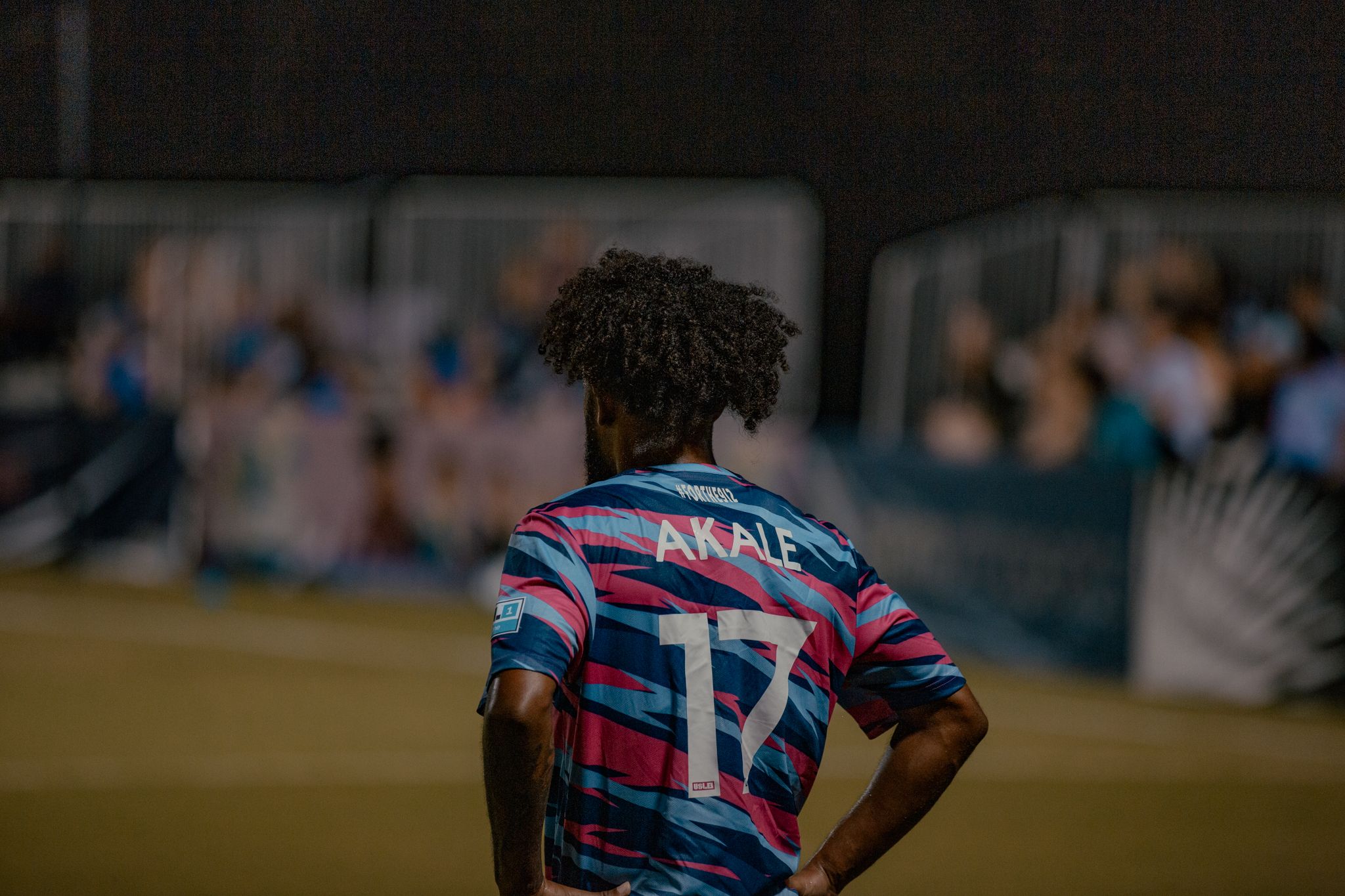 It’s been a long, strange trip overseas for Minneapolis’ own Mukwelle Akale. But his return to professional soccer, in the U.S. no less, signifies a second chance that many players don’t receive.

Akale left the United States at age 16 to sign with Villareal in the La Liga Santander – the top division of Soccer in Spain. The Minnesota native was a youth standout with the Minnesota Thunder Academy (MTA), where he played under head coach Mark Yueill. That last name might ring a bell, as Mark is the father of current San Jose Earthquakes and U.S. Men’s National team player Jackson Yueill. Jackson and Akale, both age 25, played together for years as children, however, Akale was the player who took the European route.

Akale was scouted by Villareal while playing for the U.S. U-18 Men’s National team during the Copa Del Atlantico in 2014 where, despite failing to win any of their matches, Akale was voted as the player of the tournament. He was eventually nominated for U.S. Soccer’s Young Men’s Player of the Year award in the same year, the award however, went to then Tottenham Hotspur defender and current USMNT player Deandre Yedlin.

U.S. Soccer posted a youtube video in 2014 on Akale, highlighting his path to pro and path to the youth national team.

Akale spoke in-depth with SotaSoccer.com about his footballing experience following his departure from Villareal, with the 25-year-old now under contract in the USL League One with South Georgia Tormenta FC.

Setting sail across the Mediterranean Sea, Akale went from Spain to Cyprus, a small island country just south of Turkey and the Anatolian Peninsula. Akale joined Pafos FC and the project that then manager Cameron Toshack had pitched to him. However, things quickly didn’t go as planned – for Toshack or Akale.

“I chose that team (Pafos FC) because the coach at the time (2020) presented to me a project where he was trying to get a lot of young players to finish in the top three in the league and then make Europa League football or Champions League football,” Akale said. “And you can see it this year (2022) that there’s three or four teams from Cyprus in the Europa League and Champions League, playing teams like Arsenal and Manchester United, so that was the original plan… But two or three weeks after I got there… he got fired and then things changed around a bit.”

“I signed a two year deal with options, and I was there for about four or five months… things were going well, you know, and then I got a call from my dad, that my mom was in the hospital feeling sick, and that the doctor just said – and we had no idea about this – the doctor told me she had two weeks to live,” Akale said.

Akale informed Pafos that he needed to return home to be with family, and immediately made his way back home to Minnesota. However, his mother unfortunately passed shortly after his arrival.

His mother, Janet Madzey-Akale fought a courageous battle with Liver Disease, but passed on January 21, 2021 at the age of 61.

“My brother and I, we spent the last two weeks with her and then she passed and then we spent a little bit of time still in Minneapolis, still, just grieving… being with family for some time,” Akale said. “Eventually I went back to Pafos and when I got there, they told me that they had taken me off…they unregistered me. So I couldn’t play in any matches for the remainder of the season, and that didn’t make any sense to me, my family or my agent ,so we just decided to cancel the contract and I’d go back home.”

His return home, once again, turned into the longest break he has ever taken from the professional game

“I finished grieving, just spent time with family because I wasn’t really ready to go back (to football), and all of a sudden it was one month home and three months and six months and the calendar was going by fast, and eventually after a while I decided okay, I want to get back into football.”

The following summer, Akale would pop up at an open training session with Minnesota United FC, where media members noticed him immediately. However, Akale’s time with the Loons was purely for training purposes and nothing more. Akale had made the decision that he wanted to find himself as a footballer again and Minnesota’s Major League Soccer franchise agreed to lend a helping hand.

“I had just started training again after just like six months of not doing anything,” said Akale. “So they offered to help me get back into shape and they let them train with the team. So that was really helpful.”

The Summer of 2021 was an influential time for the then 24-year-old, who began to once again pursue his footballing passions. Akale described the period where he wasn’t playing as a time where he was a little “lost,” but he found himself shortly thereafter and once again set out on his journey.

Following a summer of training with the Loons, on his own and with friends, Akale returned to Europe with the idea of once again of playing professionally abroad. Akale went on trial with a number of clubs in Europe, including opportunities with RFS in Latvia and SJK and HJK Helsinki in Finland, but did not manage to land a contract.

“It was just really difficult because I just came in – straight into the middle of their season – when I hadn’t played… the last time I played a professional match was nearly a year ago.. So I just hadn’t been playing or playing a lot.”

Akale highlighted what he believes was his lack of match fitness along with the fact that he had not played in nearly a year’s time as to why he wasn’t awarded a contract, but he still believed that despite not earning a contract abroad, opportunity was still waiting.

“So those didn’t work out but you… just in football, you never give up. Keep trying, keep trying to eventually say I found something.”

From there on out, Akale continued to train and work towards that level of match fitness that he felt would be required to compete at a professional level. No longer having a place to train saw Akale take matters into his own hands and with the help of both family and friends, he eventually found that level.

“I’d play with friends at the park, stuff like that, just trying to get touches on the ball every day,” said Akale. “[I’d] go to the gym every day. try to get my fitness up by running football drills everyday, but it’s not the same as training at a high level everyday with a bunch of other professionals. So I did the best I could. When you come and you train every day and then play matches, that’s still the easiest way to get back into fitness. So I just prepared myself as best as I could.”

Come 2022, Akale was feeling reinvented as a footballer. Following unsuccessful trials in the Fall of 2021, he spent time figuring out where his next landing spot would be. For the first time in his career, Akale was set to play professional soccer in the United States. However, the soccer pyramid was a lot different nearly 10 years on from his last time playing on U.S. soil.

“For me, I didn’t know what to expect. Like I said I hadn’t played in the U.S. since I was 16. So coming back and seeing the USL league One, the USL Championship and MLS all this I noticed that there’s a lot of good players in MLS, the (USL) Championship and USL league one.”

Akale’s first contract came from a USL League One side, but things didn’t go as planned as another setback hit Akale.

“In January (2022), I went on trial with Fuego (Central Valley Fuego) who is also in (USL) League One, and I was set to sign there… then two days later, I tore my MCL in grade three.”

Akale’s planned return to the game was immediately cut short, as he was sidelined for months due to injury.

“For the first two or three months I didn’t even want to run on it because I just wanted to heal fully,” said Akale. “So I was basically just sitting at home doing gym upper body stuff that I could and that took a long time to heal because you know, knees are tricky… [I} luckily healed myself because when it’s a grade three, it might need surgery, but over those three to four months, I then said that it’s okay, it’s healing I can, I can run… I can change direction… I can really start training again”

And training again is exactly what Akale did. He returned to the pitch in May of 2022 and started his journey to match fitness once again. His hard work was rewarded, when the now 25-year-old was awarded his first contract since leaving Pafos FC in the early months of 2021.

“Just getting those game minutes and being part of the team and playing and each game I feel like I’m getting a little bit better, getting my fitness up, getting touches on the ball and doing what I used to. It’s an amazing feeling just to be back into it. I’m really happy with where I’m at right now.”

Akale has started four of five matches for Tormenta since arriving, where he has flourished in a Right Wing role. Through his five appearances, he earned a penalty and scored his first goal for the club in a 1-1 draw against FC Tucson. His strike earned the USL League One Goal of the Week honors.

Akale now looks to leave his mark on the American game and work his way back to the top, with USL League One being the first destination where he can make an impact.

“The number one goal for me is first is to make the playoffs and then from there, It’s a win the whole thing,” Akale said. “Individual numbers are nice, but the teams with all the eyes on them are the ones that are winning. So we’re a team that’s winning. There’s gonna be a lot of eyes and a lot of top quality players we’ll be coming up against.”

As to what the future holds, nobody – including Akale – knows. He was added to the Tormenta roster for the remainder of the 2022 season and from there on out, “Kwelle” has an opportunity to carve a new path.

Tormenta have four matches left in the Regular Season and are in pole-position to earn a playoff spot. For Akale and his new club, opportunity awaits.