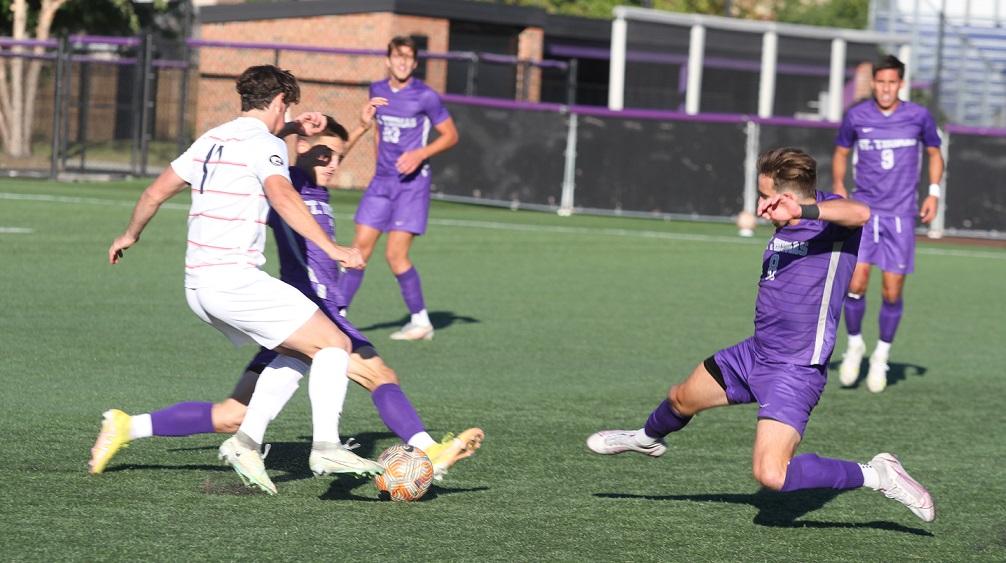 Tuesday afternoon’s showdown against the Gonzaga Bulldogs was primed to be an exciting one, St. Thomas was coming off of a week where they were unbeaten in two games and junior goalkeeper Tucker Mann had been chosen as the Summit League defensive player of the week for his contributions. The Tommies even started the game on the front foot, with two early chances.

The first, a darting counter attack in the 2nd minute where Carver Tierney found Charlie Holton on the right side of the field, who then pulled the ball back across Gonzaga’s 18-yard-box to no avail. The other off of a long throw in the 21st minute from Devin DiGrado, starting in place of the injured Connor Aksoz. The ball sailed through the brisk St. Paul sky, bounced off of defenders and attackers alike, before Tierney again got on the ball, controlled with his chest, and fired towards goal with his left foot.

The ball unfortunately sailed wide and it was all Gonzaga from there. with goals in both the 29th and 33rd minute coming off of corner kicks for the Bulldog’s, showing Coach Lowery what he believes to be a learning moment for his kids, “No, I don’t think it’s unlucky [the corner kick goals], I think it’s immature. I think it’s 100% on us… it’s that moment in a game where maybe previously where you can take a break, and we’re learning hard lessons that you just can’t you know… but I know we’re gonna continue to learn and I would be a real jerk if I went in there and lit the guys up for those two moments because there was so many bright moments that these young guys put out there today.”

And bright moments there was aplenty, because when the going gets tough, the Tommies get going.

The first goal on the road to the Tommies attempted come back came off the foot of Faris Colic who has now tied his goal total from last year with two goals from only five games played. He was found by Jacek Nickowski who is playing like a man on fire, with 2 goals and 2 assists already on the season, he is a huge offensive focal point for the Tommies.

The Tommies went down by a second goal again in the 84th minute, albeit against the run of play, as the Tommies had controlled most of the second half and were beginning to find their rhythm against a much older Gonzaga team.

The Tommies even threatened twice in the final five minutes, when Oliver Bieleveldt stepped up to take a penalty in the 87th (which was saved) and Carver Tierney finding his team-leading third goal of the season, as the freshman helped the Tommies find their own set piece goal in the 88th minute.

To provide even more optimism, the Tommies weren’t even at full strength with defenders Aksoz (mentioned above) and Jack Gleckler out injured for this game. St. Thomas returns to action this Saturday against conference foe Oral Roberts, and the hope is that the Tommmies will be at full strength. “The plan is… it’ll be close for both of them [Gleckler and Aksoz]… I’m hopinh we can get there and just kinda solidify things there and really put our full focus back into staying in the Summit race,” said Lowery. The Tommies currently sit tied for first in the conference after their 2-0 win over Eastern Illinois last week.