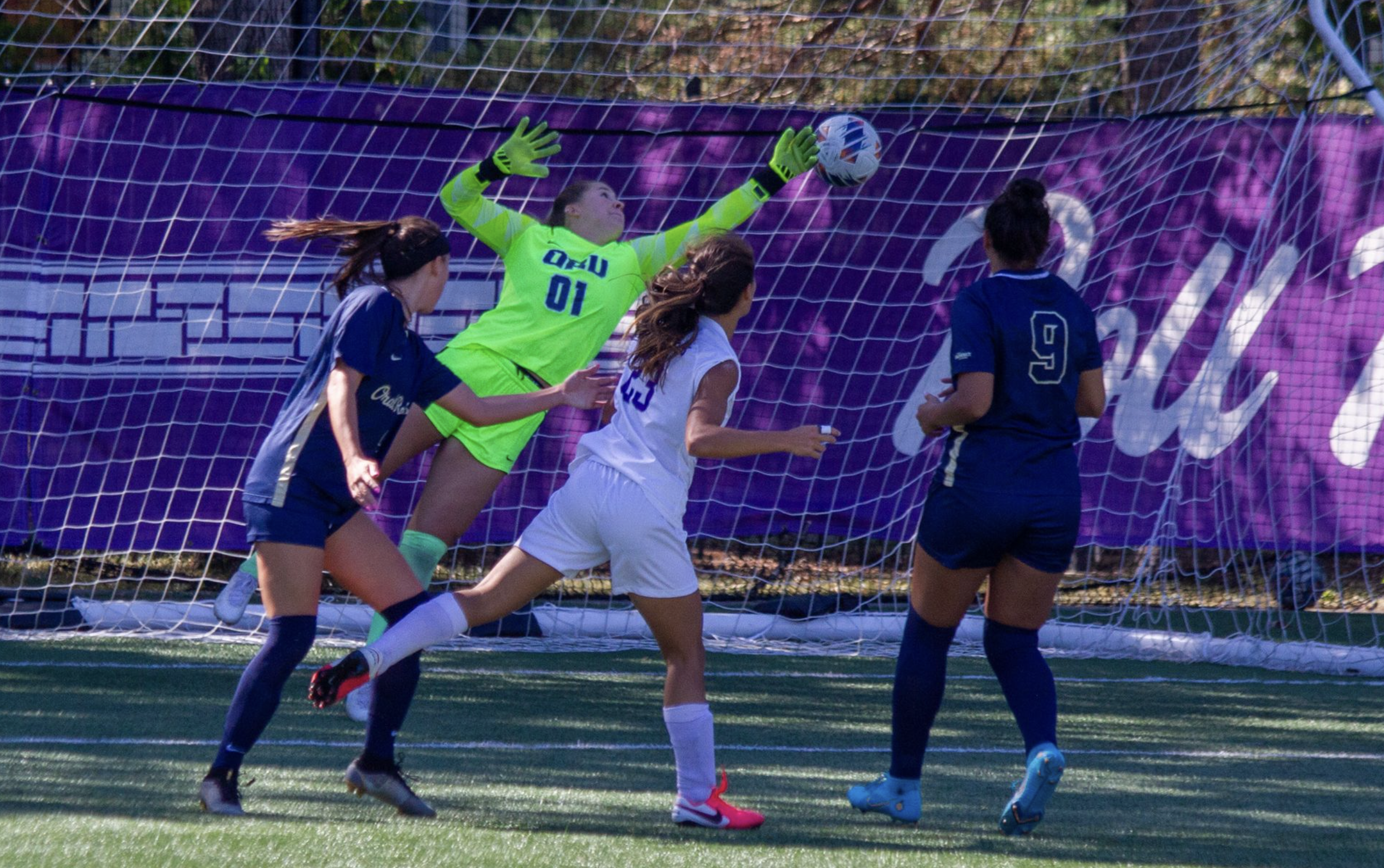 The St. Thomas Tomcats headed west on 94 last weekend and split their games against their North Dakota foes. Now, they sit in second place in the Summit League standings with just five games to go in conference play. Let’s take a look at how the Tomcats have continued their frisky play this fall even as they take on tough conference opponents.

Recent Results
AT North Dakota State – Win 3-2
This one was about as much of a shootout as St Thomas has had this fall. NDSU opened the scoring super early, UST battled back to tie before halftime. NDSU again gets on the board early in the second half but UST quickly responds to pull even. Then, 20 minutes later the Tomcats pull ahead and don’t look back. Big games from Abby Brantner (two assists) and Anna Eckroth (one goal, one assist) help get them there.

AT North Dakota – Lose 0-1
In a tale of two halves, North Dakota peppered the St Thomas defensive unit in the first 45 minutes, going ahead 1-0 thanks to an 11-3 shot advantage. Then, after halftime the Tomcats turned up the heat and pressed hard to their own 12-1 shot advantage but just couldn’t find the net, eventually leaving with a tough 1-0 loss – letting North Dakota pull even with them in a tie for second place in the Summit League halfway through conference play.

Who’s stepping up?
Our coverage of St Thomas is always especially fun because Head Coach Sheila McGill is almost militantly a team-first zone. You can *sometimes* get her to say an individual name if you sneak up on her, but it’s rare. Meanwhile, Equal Time is an all hype zone. Yes, we like to spread the hype around – but we are always ready to hype up individual players nonetheless. So for this section, we are going to stress out Sheila and give some individual love to some top offensive performers on the Tomcats.

First, some love for a veteran (which on this team means sophomore) Abby Brantner. The attacking unit for St Thomas is super broad, with a ton of folks seeing minutes in any given game. Each individual stint on the field can also be super short, with limited time to settle in and make an impact. That’s what makes Branter’s four-assist-campaign (tied for 4th most in the Summit League) so far this fall so impressive. One minute, Nguyen-Huber-Sanchez are out there doing their thing. The next minute, Brantner is bounding onto the field with her bouncy gait (running style) ready to add some energy in the attacking third.

Next, shout out for the impact transfer Mariah Nguyen who has the fourth most total points (from 4g, 4a) and goals in the Summit League. The output is great. But the efficiency is what’s truly absurd. Nguyen has four goals on just 15 shots. Let’s put that in perspective. The leading scorer in the Summit League (Amy Andrews) has scored 7 goals on 52 shots. She scores on every 7.5 shots she takes essentially – she just takes roughly a shit load of them. Nguyen scores at TWICE that efficiency. Does that mean she could score twice as many goals if she also had the chance to take five shots a game? I mean…do we dare doubt her…? Either way, the offensive production is incredible for the impact transfer from Bemidji State.

Path to the Top 6
As we mentioned in our previous St Thomas coverage, the Tomcats aren’t eligible for post season play while they continue their transition period from DIII to DI. But that doesn’t stop them from having a *very* strong desire to make the newly expanded Summit League Tournament field on paper. Their path to a Top 6 (previously the field was Top 4) finish will be tough.  They have remaining games against top dogs South Dakota State and Denver, against pack the box Omaha, and against always up for a fight South Dakota and Western Illinois. They have a bit of a buffer to drop points by currently sitting in second place (and having some wiggle room down to sixth) but they’ll still need to pull off some results in their final five matches.

So far, in conference play, it’s fairly easy to predict what St Thomas will do overall. They will pass with around 65 percent accuracy. They will concede *a bit* of possession (typically possess about 45-50 percent). And their consistent use of long shots outside the box means their average chances are typically a bit farther out than their opponents.

That’s led to a second stingiest defense amongst Summit League teams (though their five goals allowed in four conference games is raising that goals against average a bit) and the third best win margin – again, with their toughest tests yet to come. Their willingness to both take chances from distance and to get quickly into offensive chances on the run (vs slower passing and possession in their final third where you might “engineer” corners as things bog down) means they don’t produce a ton of corners (3rd fewest in the conference) but they also don’t give away set pieces to the other team readily either (3rd fewest fouls, least yellow cards).

It’s not likely they’ll be able to be *more* stingy defensively as they start to face even more dangerous offensive attacks. But if they can largely maintain or not balloon those metrics (say, sticking vaguely around 1-2 goals allowed in conference) then their run and gun, press and go energy could give them a chance to stay in a shootout here and there. If they can get at least one win against either South Dakota or Western Illinois, and a draw or win against Omaha they likely cement their spot in the top six. And don’t count them out for a surprise result against the Summit’s top dogs (SDSU, Denver), either. They like how they showed against them last year and relish the chance to pull off a result in their second time around the Summit League loop.