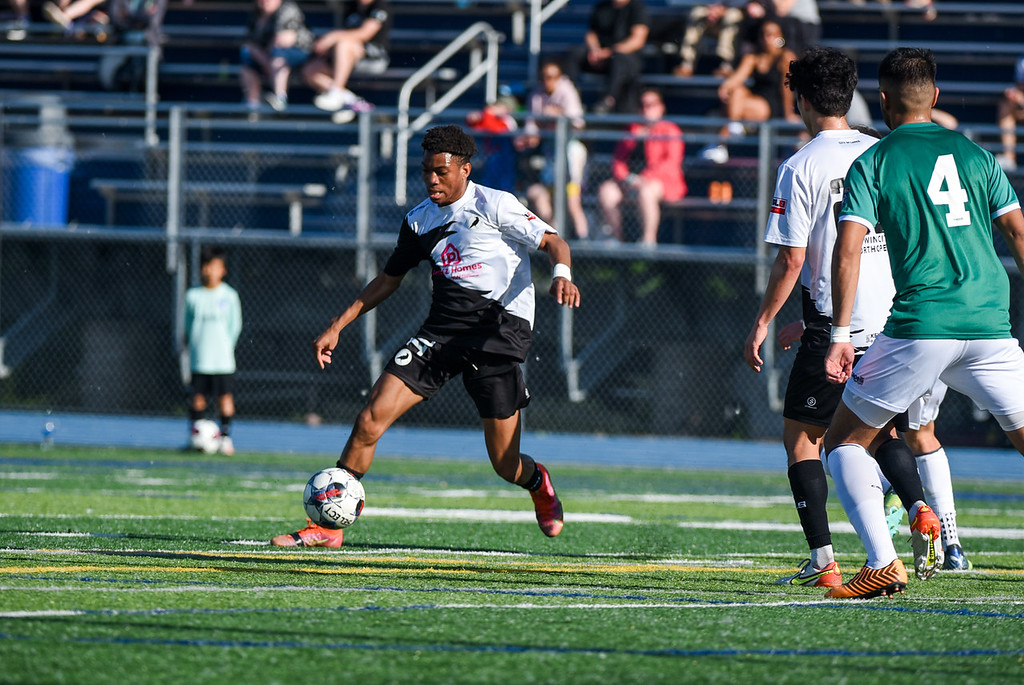 In an exciting piece of news, Loïc Mesanvi has signed to a one-year MLS NEXT Pro contract with MNUFC2, with an additional club option. It’s a move that brings applause to local soccer players, the MSHSL, the lower league scene, and the Minnesota United academy system. Here’s why.

Mesanvi is not new to the Minnesota United ecosystem, having thrived in the youth system last season. The Lomé, Togo-born forward made 15 appearances for the Minnesota United Academy in 2022, scoring 13 goals from over 1,000 minutes of play across academy competitions.

Mesanvi also made two appearances for MNUFC2 in MLS Next Pro last season, scoring a goal against Timbers 2 from one of the two shots he made across a collective 25 minutes of play for MNUFC2.

In the announcement article posted by MNUFC2 on their official website, MNUFC2 Head Coach Cameron Knowles had this to say about Mesanvi’s inclusion in the team.

“The exciting thing for Loïc is that we get to add another local player to our team. That was one of the things that we committed to when we started this team was to provide a pathway for local players,” said Knowles. “What he’s done with the Academy team so far this season has been outstanding. The time that he spent over the summer with the second team in training and the few games that he got to play, he really took both of those opportunities. I’m very excited for Loïc and the future ahead of him.”

Mesanvi will of course be familiar to many of our readers through this eventful 2022 season with Minneapolis City, who he played for in four different competitions. Playing for Lakeville SC at the club level, he was also part of the Minneapolis City Futures program, where he was the Golden Boot winner for the 2021 season. Futures program head Jeremiah Johnson noted in a tweet the day of the MNUFC2 announcement that Mesanvi was rejected twice by the Minnesota United Academy during his youth development.

The forward first broke onto the scene for the Crows’ first team with his goal against the Des Moines Menace in Minneapolis City’s U.S. Open Cup debut. While the Crows went on to lose the match, Mesanvi’s goal, along with a golazo from Lionel Vang, made it a night to remember.

The fun didn’t end there, however, and Mesanvi quickly became a go-to player for all three of the Crows competitive teams in 2022. He made several appearances in the 2022 UPSL season, helping that squad challenge for and eventually win their conference title, but quickly outgrew those boots.

In a statement to Sota Soccer, Minneapolis City Future’s Jeremian Johnson had this to say on Mesanvi’s new MLS Next Pro contract.

“There are a ton of great people doing tremendous work in our sport across the country and throughout Minnesota,” Johnson explained. “Lakeville Soccer Club and Lakeville South High School were vital to Loïc’s development.  Minneapolis City and our Futures program were one more critical stop on Loïc’s soccer journey that provided him more time to be nurtured alongside other like-minded high-level players from this area. We are thankful that Loïc has allowed us to be a part of his journey, which now continues in MLS.”

Johnson added that Mesanvi’s story reveals many of the issues in the United States’ current development process.

“Most people who work within our country’s soccer system, and are honest with themselves, will admit that identification and development of soccer talent is flawed,” Johnson continued. “Players who need more time to develop or do not have the financial means to participate get overlooked or never gain traction. I think Loic falls into that pool of players. Many talented players may give up on their soccer journey after 17, 18, 19, or 20 years old and simply need an environment beyond what traditional club, high school, and even college soccer can provide. It’s exciting to see that Minneapolis City is helping to bridge the gap to opportunities at the next level. We have now seen several players from our club make the jump to the professional ranks.”

Johnson ended by returning to how proud he is of Loïc Mesanvi, along with an assurance that the future is bright for the young player.

“The path to a player’s goal is never a straight line. That holds very true for Loïc.  Watching him evolve from a relatively unknown high school player into a full-time professional is amazing. Being part of his journey is definitely a magical memory for me. As I’ve said many times, ‘the sky is the limit for Loïc.'”

Finally, Mesanvi is also an accomplished high school player. From 2019 to 2021, Mesanvi made 40 varsity appearances for Lakeville South. In that time, he scored 36 goals and made 16 assists. His single season assist high, eight, came in his sophomore season. His single season goal scoring high, 24, came in his senior year. It should also be noted these numbers are affected by the 2020 COVID season, in which he only had seven appearances.

Loïc Mesanvi carries the ball forward for Minneapolis City in a NPSL match against Duluth FC. Courtesy of Daniel Mick.

While with Lakeville South, Mesanvi was part of a squad that made a state appearance in 2019, as well as challenging for the Section 1AAA title in 2021, which they lost narrowly to Rochester Mayo.

All in all, it’s easy to see that Loïc Mesanvi has been a name to watch for quite some time. From high school soccer to youth club soccer to adult amateur soccer, Mesanvi just always seems ready to go. With a small but powerful impression already left on the MNUFC2 roster in 2022, 2023 is sure to be an exciting next step for the Lakeville South graduate.

As Loïc Mesanvi joins MNUFC2 next season, he’ll become one of several important representatives of Minnesota’s local scene at the next level. For the former Crow, the future beacons with possibilities.